< Failure to Prevent: International Decision Making in the Age of Genocide

International Decision Making in the Age of Genocide: Rwanda 1990–94 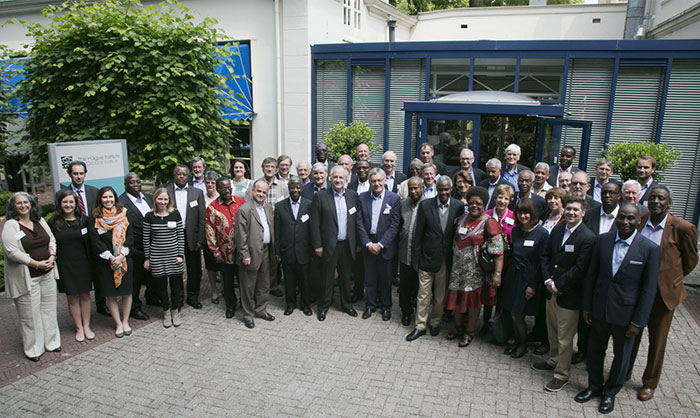 The conference brought leading decision makers and eyewitnesses to The Hague to consider the failure of the international community to prevent or effectively respond to the 1994 genocide in Rwanda. —Loesje Praktijken

On June 1–3, 2014, leading decision makers from the United Nations, Africa, the United States, and Europe gathered in The Hague to consider the failure of the international community to prevent or effectively respond to the 1994 genocide in Rwanda and to explore whether and how the tragedy might have been averted. The conference, International Decision Making in the Age of Genocide: Rwanda 1990–94, was co-sponsored by the Museum’s Simon-Skjodt Center for the Prevention of Genocide and The Hague Institute for Global Justice, in cooperation with the National Security Archive at George Washington University.

Conference participants included architects of the 1992–93 Arusha Accords; the leadership of UNAMIR, the UN peacekeeping force in Rwanda; four former members of the UN Security Council; senior officials from the United Nations, Africa, the United States, and Europe; and former diplomats, human rights activists, academics, and journalists present in Kigali before and during the genocide.

This rare convening of former officials and eyewitnesses coincided with the 20th anniversary of the genocide that took the lives of as many as one million Rwandans, predominantly Tutsis, between April and July 1994. Foreign Policy (external link) heralded the conference as an “extraordinary opportunity for 40 key players and observers to review the missteps.”

As part of a broader initiative to shed new light on the failed response to the genocide, the conveners made available online thousands of pages of newly declassified documents, including reports from key players in the UN Security Council debates who attended the conference: New Zealand envoy Colin Keating, president of the Security Council in April 1994; Sir David Hannay, the British permanent representative to the UN; and Karel Kovanda of the Czech Republic, who was the first UN ambassador to use the term “genocide” to describe the events in Rwanda. Read a New York Times article (external link) about these newly released documents.

The conference focused on three themes. The first, “Failure to Prevent,” addressed the lead-up to the genocide between October 1990 and April 1994 and explored such questions as whether the international community might have been able to foresee and prevent the gathering catastrophe in Rwanda. Read a Washington Post article (external link) about the growing body of evidence that the world knew about before the genocide.

The second theme, “Failure to Protect,” focused on the international response to the genocide, with special attention to the role of the UN Security Council. The third theme was devoted to lessons learned, examining the similarities and differences between Rwanda and other contemporary mass atrocities.

The conference was modeled on a series of “critical oral history” gatherings co-organized by the National Security Archive over the past 25 years that have expanded public and scholarly knowledge of the Cuban Missile Crisis, the Vietnam War, the end of the Cold War, and US–Iran relations, among other topics.

Compiled as part of the Failure to Prevent initiative, these videos feature testimony from former leading officials and eyewitnesses to the genocide in Rwanda.

View transcripts, reports and other materials related to the conference.

This conference was made possible in part by the generous support of the Sudikoff Family Foundation, which funds the Museum’s Sudikoff Annual Interdisciplinary Seminar on Genocide Prevention, and by the support of the John D. and Catherine T. MacArthur Foundation for the National Security Archive’s genocide documentation efforts.