Failure to Prevent: International Decision Making in the Age of Genocide

The Museum’s Simon-Skjodt Center for the Prevention of Genocide led a multiyear initiative, in partnership with the National Security Archive at The George Washington University, to explore the failure of the international community to prevent or effectively respond to past cases of genocide.

By examining pivotal moments when international action could have made a difference and by drawing directly on the experiences of those who were involved, we sought to identify key lessons learned and to develop tools that can be used by policy makers, scholars, and students around the world to prevent future genocides. 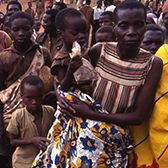 April 2014 marked the 20th anniversary of the Rwandan genocide, in which 500,000 to one million Rwandans, predominantly Tutsis, were massacred in just 100 days. The first phase of our initiative explored whether the international community could have foreseen and prevented this genocide.

This series of “electronic briefing books” provides in-depth background to pivotal events before and during the genocide when international action could have made a difference. Learn More

The Rwanda phase of the initiative culminated in an oral history conference in June 2014 in The Hague, where leading decision makers examined the failure of the international community to prevent the genocide. Learn More 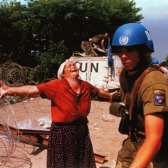 In July 2015, we observed the 20th anniversary of the Srebrenica massacre, in which Bosnian Serb troops killed some 8,000 Muslim men and boys from the UN–designated “safe area.” Ignoring pleas for close air support from Dutch peacekeepers, UN and NATO officials did nothing to prevent the fall of the enclave. Even today, there is controversy over who was to blame for the failure of a major international peacekeeping effort, the largest of its time.

This phase of the initiative explored what policy makers knew and when, and what we can learn from this to prevent mass atrocities and genocide in the future. Learn More