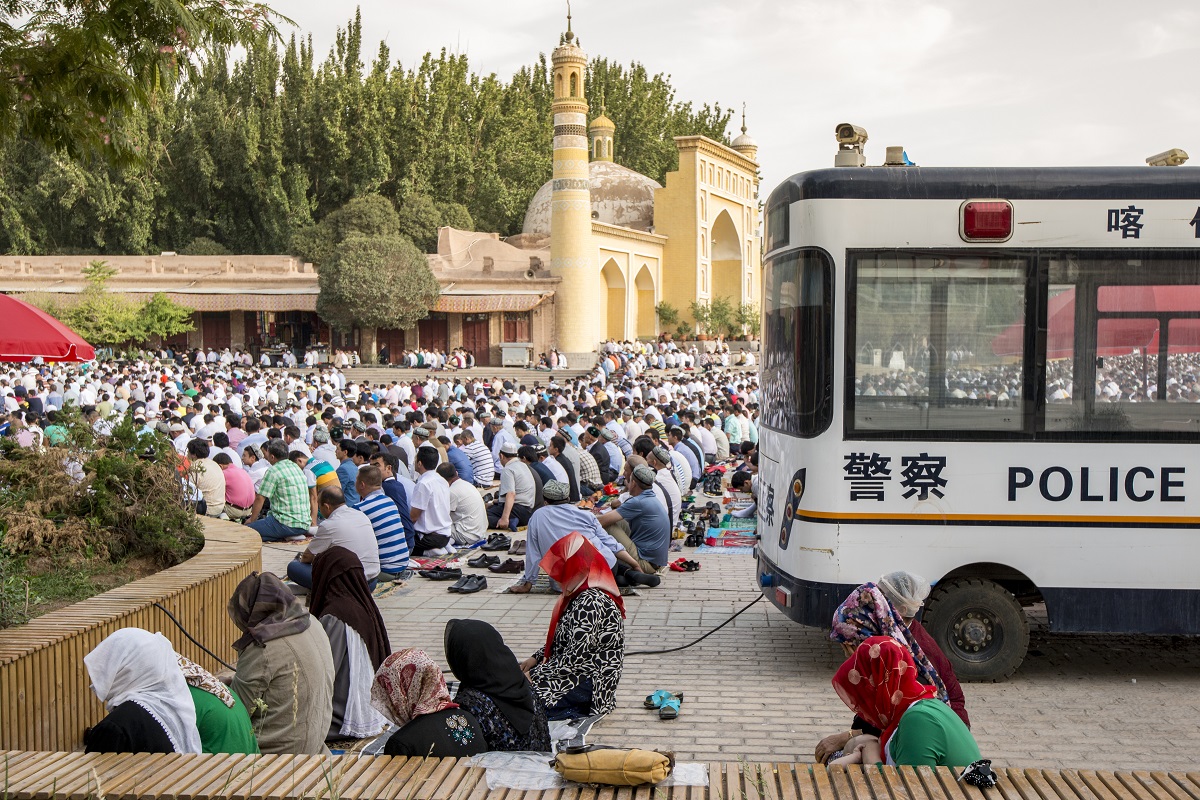 In July 2015, outside the Id Kah Mosque in the ancient Silk Road trade town of Kashgar, Uyghur men and women pray during Eid al-Fitr, a joyous Muslim holiday that marks the end of Ramadan. Police vehicles and security line the public square in Xinjiang, China. —Photograph courtesy of Alexandra Williams.

The Uyghur community is a Turkic Muslim group of approximately 11 million people who live predominantly in the province of Xinjiang, in western China. The Chinese government has persecuted Uyghurs for decades, but in recent years it has escalated this repression by tightening control over every aspect of Uyghur life. Efforts at controlling and surveilling the Uyghurs expanded markedly in 2016, after the appointment of a new Communist Party chief for Xinjiang, Chen Quanguo, who had previously managed policing in Tibet. Under Chen, the state increased the scale of its network of detention centers in the spring of 2017. Today, the Chinese government is using sophisticated social and technological surveillance systems in order to control everyday aspects of Uyghur life, crack down on expressions of identity, and detain approximately one million people.

There is a reasonable basis to believe that the government of China is committing crimes against humanity, notably imprisonment and persecution. In general, crimes against humanity are one of the most grave and serious crimes, inflicting severe harm upon entire communities, the trauma from which can last across generations. The massive surveillance and detention infrastructure China has constructed poses a significant threat to the Uyghur people, whose ability to express through cultural and religious practice their unique identity is seriously infringed.

In the second half of the 20th century, Chinese state policies prioritized assimilation of ethnic minorities—including Uyghurs—into the Han majority, and encouraged allegiance to the state’s Communist party leadership. For decades, the government facilitated the settlement of ethnic Han Chinese in historically Uyghur areas.

In July 2009, thousands of mostly Uyghurs took to the streets of Xinjiang’s capital of Urumqi to protest state-led discrimination and land reclamation. The Chinese government cracked down on the demonstrators. Many Han and Uyghur civilians were killed in the ensuing violence. Since then, these riots have fueled the Chinese government’s rhetoric that Uyghurs pose a threat to the state. There were several incidents where some Uyghurs committed fatal attacks, which further strengthened the state’s framing of the community as dangerous. Some Uyghur leaders have long pressed for an independent East Turkestan, which the state uses to rationalize its national security concerns in the region.

In 2014, the Chinese government launched a official anti-terrorism initiative, which Communist party leaders say targets those considered a threat to “state security, ethnic unity, and social stability.” This broad mandate has led to widespread arbitrary arrests and detentions of Uyghurs, who are labeled as “untrustworthy” citizens. The campaign provided the foundation for building an infrastructure of state control and surveillance throughout Xinjiang to suppress the Uyghurs.

China has long used the fight against Islamic extremism to justify its persecution of Uyghurs, but its policies of mass detention that have imprisoned approximately one million civilians, young and old, extend beyond any reasonable counter-terrorism approach and are instead a systematic attempt to target the unique culture of the Uyghur population.

The Chinese government’s campaign against the Uyghurs in Xinjiang is multi-faceted and systematic. It is characterized by mass detention, forced labor, and discriminatory laws, and supported through high-tech manners of surveillance.

Uyghur Muslims are barred from freely practicing their religion, speaking the Uyghur language, and expressing other fundamental elements of their identity. Counterterrorism laws and regulations prohibit certain religious practices relating to dress, language, diet, and education, and religious institutions are closely monitored and regulated by the Chinese government. Even ordinary acts such as praying or going to a mosque may be a basis for arrest and detention.

China has created a massive system of detention and disappearance; approximately one million Uyghurs are currently detained, for reasons that may include practicing religion or having innocuous foreign connections such as attending a western university. The Chinese government has defended the camps as “vocational training centers” aimed at combating violent extremism, but leaked documents reveal that the state is in fact targeting people based on religious observance, such as praying or growing a beard, as well as family background. The construction of camps has increased significantly in recent years, with estimates of the total number of facilities ranging between 500 and 1400. Researchers have reported that individuals often are subject to ill-treatment and indoctrination. Uyghurs who have been detained report being forced to renounce their religion, express allegiance to the state, and sing patriotic songs. Some have even reported torture and sexual violence. Forced labor in detention centers is reportedly increasingly common, and may be part of the government’s effort to achieve compliance and assimilation through breaking traditional cultural bonds. Those who are detained are separated from their family members, often unable to communicate with them. Children whose parents are detained are placed in government-run adoption centers, sometimes far from their homes and families.

The Chinese government is employing technology to surveil people throughout China. When employed against the Uyghurs, the massive surveillance system is used to monitor perceived infractions, such as connections to people outside of China or expressions of faith, which can result in detention and/or disappearance. Uyghurs are also being surveilled and exposed to state propaganda by their neighbors and state agents in their communities. Under the “Unite as One Family” program, the Chinese government has stationed an estimated one million Han Chinese citizens in Uyghur households for mandatory homestays. Uyghur families likely cannot refuse this in-person monitoring.