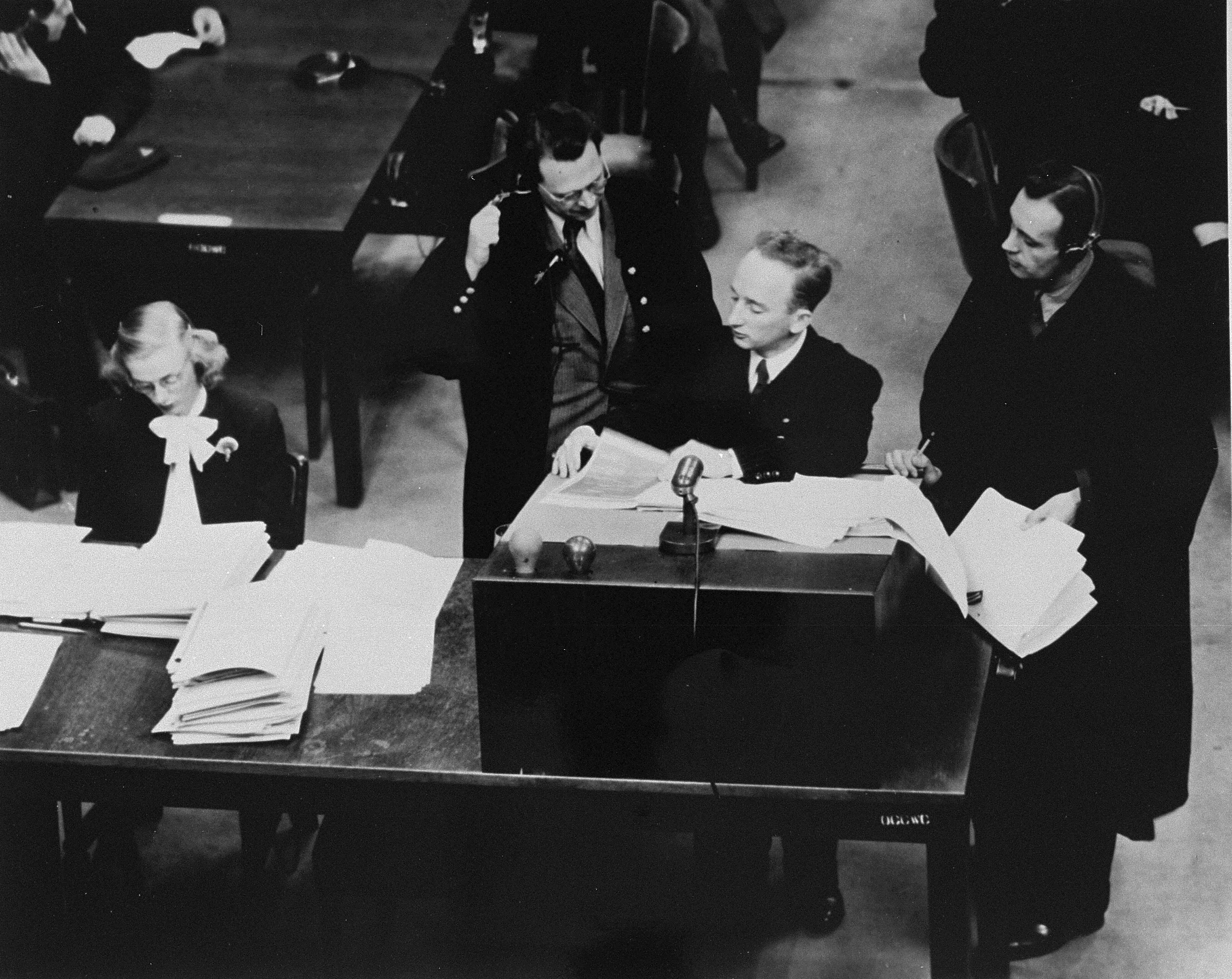 In 2017, Ben Ferencz partnered with the United States Holocaust Memorial Museum’s Simon-Skjodt Center for the Prevention of Genocide to establish the Ferencz International Justice Initiative to continue his legacy of demanding justice for victims of atrocity crimes. As a former Nuremberg investigator and prosecutor, Mr. Ferencz is one of the most iconic voices in the field of international justice and one of the most effective change-makers for justice. Throughout his career, he has made use of every tool in the justice toolbox: collecting evidence and documenting the atrocities of the Holocaust; prosecuting cases against war criminals; representing victims in their restitution claims; developing new norms, laws, and treaties; helping to build the political will for new international courts; and writing, teaching, and inspiring the next generation of justice champions. Having witnessed the horrors perpetrated by the Nazis, Mr. Ferencz has fought tirelessly to build the architecture of international justice around deterrence, prevention, and accountability for mass atrocities. 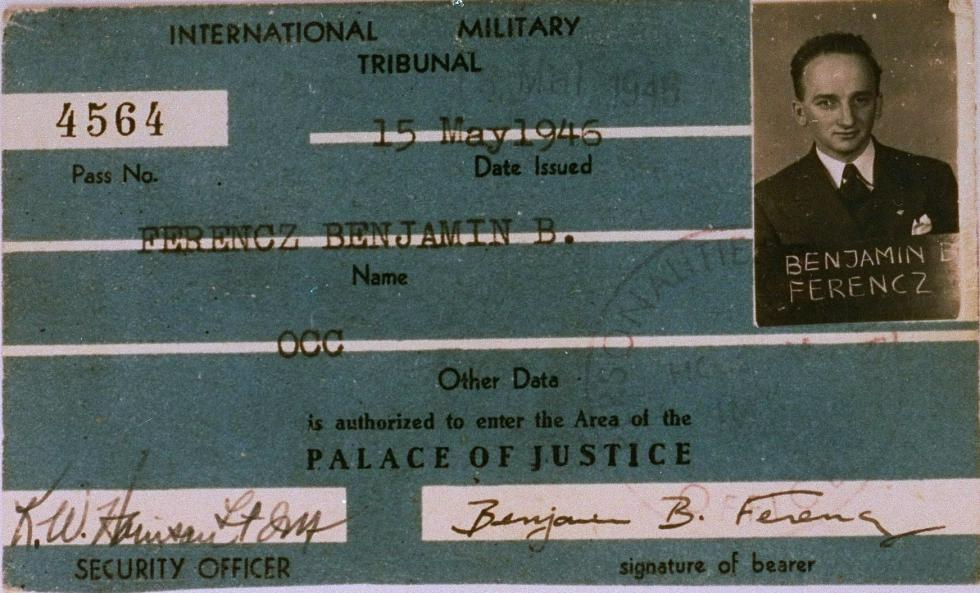 Mr. Ferencz was born in Transylvania in 1920. Ten months later, his family moved to the United States, where he grew up in Manhattan. Since childhood, Mr. Ferencz has felt a burning desire to press for global peace; this same desire continues to motivate him today.

In 1943, Mr. Ferencz graduated from Harvard Law School and soon thereafter he joined an anti-aircraft artillery battalion. Mr. Ferencz served for the United States under General Patton throughout World War II, and towards the end of the war he was invited to investigate Nazi war crimes for the War Crimes Branch of the US Army. In his role as war crimes investigator, Mr. Ferencz gathered evidence about the horrors perpetrated by the Nazis, visiting concentration camps as they were liberated. His mission was to gather credible evidence that could be used in a court of law to try and convict persons responsible for international crimes. Memories of the horrifying scenes he witnessed during this period left a permanent impression on Mr. Ferencz and inform his ongoing desire to see a world in which those responsible for atrocity crimes are held to account.

“Camps like Buchenwald, Mauthausen, and Dachau are vividly imprinted in my mind’s eye. Even today, when I close my eyes, I witness a deadly vision I can never forget [...]”

At the end of 1945, Mr. Ferencz was honorably discharged from the US Army with the rank of Sergeant of Infantry and returned to New York where he prepared to practice law. Soon thereafter, the US Government recruited Mr. Ferencz to join the team working on the Nurember tribunals, a novel independent court established to try top-ranking Nazi officials for crimes perpetrated during the Holocaust. The US Government asked Mr. Ferencz to remain in Germany during the twelve subsequent Nuremberg trials, which General Telford Taylor oversaw. Mr. Ferencz was sent to Berlin to oversee a team of fifty researchers investigating official Nazi records, which provided overwhelming evidence to implicate German doctors, lawyers, judges, generals, industrialists and others in genocide.

In Berlin, Mr. Ferencz gathered sufficient evidence to prosecute individuals in connection with the so-called “roving task forces” or Einsatzgruppen that were established to murder Jews, European Romas, communist functionaries, and Soviet intellectuals. At the age of 27, Mr. Ferencz was appointed Chief Prosecutor in the Einsatzgruppen Trial, in what the Associated Press called “the biggest murder trial in history.” The Court found 20 Nazi officials guilty of war crimes, crimes against humanity, and membership in a criminal organization for their roles in the murder of over a million people. An additional two defendants were found guilty for membership in a criminal organization but acquitted on charges of war crimes and crimes against humanity.

After the trial, Mr. Ferencz fought for compensation for victims and survivors of the Holocaust, the return of stolen assets, and other forms of restitution for those who had suffered at the hands of the Nazis.

On the 75th anniversary of the beginning of the Nuremberg Trials, Mr. Ferencz reflected on the impact the trial had on him and shared his inspiring story about devoting his life to pursuing peace, demanding justice for victims, and preventing genocide.

The Neverending Pursuit of Peace and Justice: “Law Not War”

“Nuremberg taught me that creating a world of tolerance and compassion would be a long and arduous task. And I also learned that if we did not devote ourselves to developing effective world law, the same cruel mentality that made the Holocaust possible might one day destroy the entire human race.” —Ben Ferencz

In the decades since the Nuremberg Trials, Mr. Ferencz has dedicated his life to ending war and promoting justice. A testament to his commitment to these efforts, Mr. Ferencz partnered with the Museum to launch the Ferencz International Justice Initiative in 2017 to coincide with the 70-year anniversary of the Einsatzgruppen Trial at Nuremberg, in which he was Chief Prosecutor. He has been a strong proponent of the International Criminal Court, of reaching international consensus around a definition of the crime of aggression, and of other mechanisms to hold high-level perpetrators to account for mass atrocities. He is compelled by the imperative to “replace the rule of force with the rule of law,” by ending warfare in favor of judicial mechanisms that can resolve conflict. He often tells young people to “never give up” because the fight for peace and justice is worth the long struggle ahead. 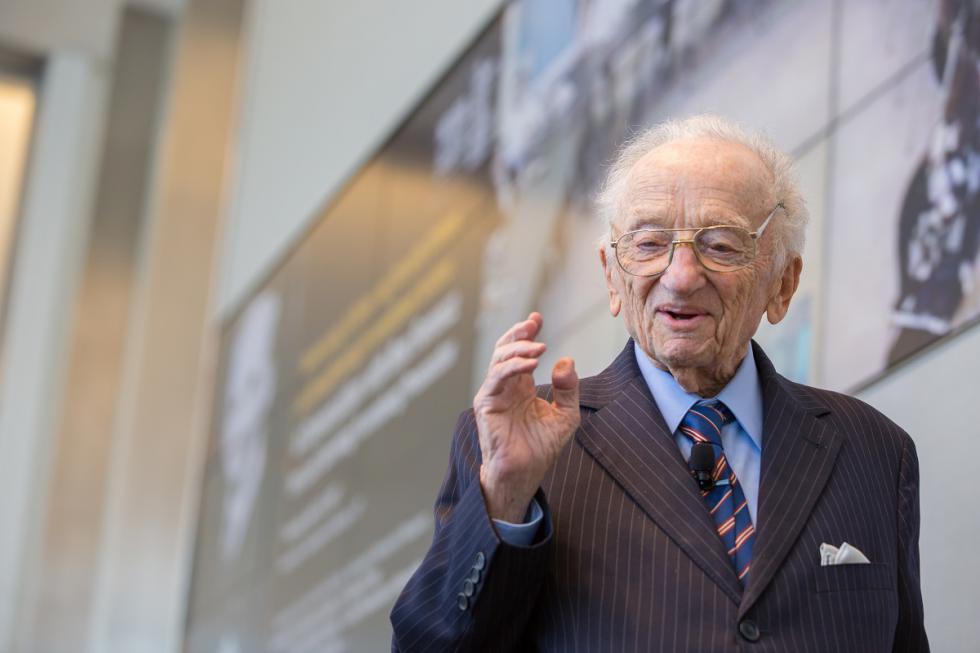 Mr. Ferencz speaks at an event for the launch of the Ferencz International Justice Initiative. —US Holocaust Memorial Museum

Mr. Ferencz has published widely on issues pertaining to world peace generally and to international criminal law more specifically. Some of his titles include:

Mr. Ferencz lives in Florida and has four grown children. He continues to advocate for international law and global peace.