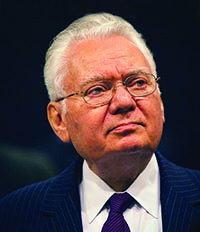 One of the youngest survivors of Auschwitz, Judge Thomas Buergenthal brings a unique perspective to international law and human rights. Born in Slovakia, he was five years old when World War II began. In addition to Auschwitz, he survived the Kielce ghetto, a death march, and Flossenburg. He immigrated to the United States in 1951.

As judge and president of the Inter-American Court of Human Rights, as member of the UN Truth Commission for El Salvador and the UN Human Rights Committee, as judge of the International Court of Justice, and as law professor, Buergenthal has worked to strengthen the principle that governments must be held accountable for human rights violations. He has sought justice for Holocaust survivors through his service on the Claims Resolution Tribunal for Dormant Accounts in Switzerland and played a key role in the formation of the Museum and its Committee on Conscience. He is the author or co-author of more than a dozen books, including A Lucky Child: A Memoir of Surviving Auschwitz as a Young Boy. 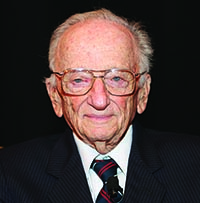 Benjamin Ferencz is the last surviving prosecutor of the war crimes trials at Nuremberg. He participated in the invasion of Europe under General Patton and served as a war crimes investigator in the liberation of several Nazi concentration camps. At age 27 he was appointed chief prosecutor of the Einsatzgruppen trial, during which 22 leaders of Nazi mobile killing squads were tried for crimes against humanity. All were convicted. He also played a leading role in obtaining German restitution and compensation for victims of Nazi persecution.

Nuremberg taught me that creating a world of tolerance and compassion would be a long and arduous task.

Those experiences inspired Ferencz to dedicate his career to replacing the “rule of force with the rule of law.” He wrote, “Nuremberg taught me that creating a world of tolerance and compassion would be a long and arduous task. And I also learned that if we did not devote ourselves to developing effective world law, the same cruel mentality that made the Holocaust possible might one day destroy the entire human race.”

In the 1970s, Ferencz gave up private law practice to devote himself to studying and writing about the potential for an international criminal court to prosecute the world’s worst crimes. He continues to advocate for international law and global peace.