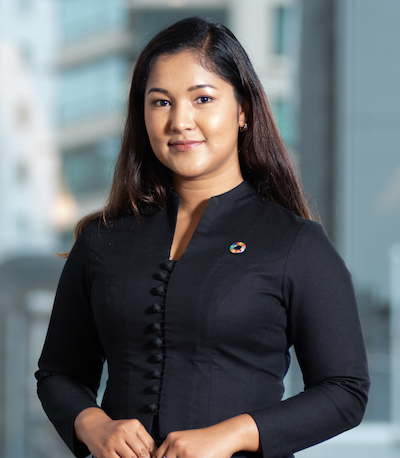 Wai Wai Nu is a former political prisoner and the founder and Executive Director of the Women's Peace Network in Burma. She spent seven years as a political prisoner in Burma. Since her release from prison in 2012, Nu has dedicated herself to working for democracy and human rights, particularly on behalf of marginalized women and members of her ethnic group, the Rohingya.

Through the Women's Peace Network, Nu works to build peace and mutual understanding between Burma’s ethnic communities and to empower and advocate for the rights of marginalized women throughout Burma, and particularly in Rakhine State. Her work also aims to reduce discrimination and hatred among Buddhist and Muslim communities and to improve the human rights of the Rohingya people through documentation, convenings, and policy advocacy among key leaders in Burma and high-level international fora.

To engage youth in the peacebuilding process, Nu founded the Yangon Youth Center—a space where young people from diverse backgrounds can come together to learn, share, and explore their ideas and promote leadership in social, political, and peacebuilding policymaking.

Nu organized the My Friend Campaign with youth from different communities to promote tolerance and to reduce discrimination among diverse groups. Through her work, she has been recognized as a Champion of Prevention by the United Nation’s Office of the Prevention of Genocide and Responsibility to Protect.

In 2014, Nu Co-Founded Justice for Women in Yangon, a legal and advocacy organization that works with victims of gender-based violence and provides pro bono legal consultation.

She previously served as a visiting scholar with the Human Rights Center at the University of Berkeley, the University of Michigan’s Center for the Education of Women, and Columbia University. Nu was also a Draper Hills Summer Fellow at Stanford University’s Center on Democracy, Development, and the Rule of Law.

Wai Wai Nu is designing and implementing outreach efforts around the Museum's exhibition, Burma's Path to Genocide. She is also serving as an advisor on the pursuit of justice and accountability in Burma.