Inside the UN Security Council, January–July 1994

In commemoration of the 20th anniversary of the Rwandan genocide, the Museum’s Simon-Skjodt Center for the Prevention of Genocide and the National Security Archive launched the first phase of a multiyear initiative titled Failure to Prevent: International Decision Making in the Age of Genocide. The first phase includes a series of “electronic briefing books” that provide in-depth background to pivotal events before and during the Rwandan genocide when international action could have made a difference. This is the last briefing book in the series.

Newly ­declassified reporting by key members of the UN Security Council provides a day­-by-day narrative of the international response to the Rwandan genocide, including the decision to withdraw UN peacekeepers from the country at the height of the killing. 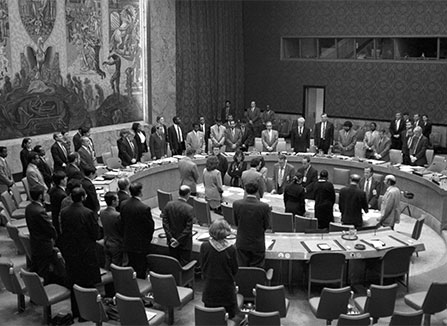 Declassification requests made by the Museum and the National Security Archive in four countries have resulted in the release of nearly 300 formerly secret diplomatic cables that provide insights into closed UN Security Council sessions in the days and weeks leading up to the genocide.

These newly released documents include reporting from key players in the Security Council debates, in addition to previously withheld US diplomatic traffic. Among the documents are cables from New Zealand envoy Colin Keating, president of the Security Council in April 1994; Sir David Hannay, the British permanent representative to the UN; and Karel Kovanda of the Czech Republic, who was the first UN ambassador to use the term “genocide” to describe the events in Rwanda.

The contemporaneous diplomatic cables offer a glimpse into the debates in the so-called “informal sessions” of the Security Council, which took place behind closed doors without the presence of official note takers. It was at these meetings that the international community shaped its response to the genocide in Rwanda in the days and weeks after the April 6 assassination of Rwandan president Juvénal Habyarimana, which triggered the start of the killing.