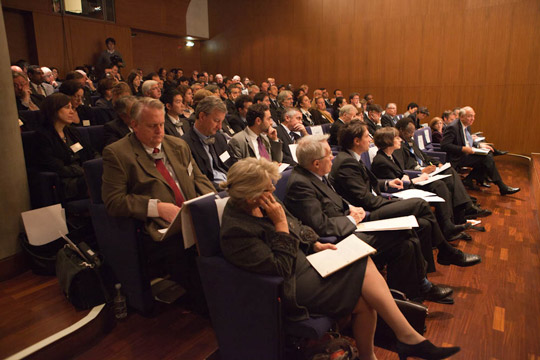 “We know the unthinkable is thinkable. What do we do with that knowledge?” Sara Bloomfield, director of the United States Holocaust Memorial Museum, asked an audience of human rights experts, conflict prevention specialists, and senior diplomats representing more than 20 governments. The group gathered in Paris on Monday to discuss how members of the international community could work together to prevent genocide and mass atrocities.

Hosted by the U.S. Holocaust Memorial Museum and the French Mémorial de la Shoah, the symposium brought together civil society experts and senior policymakers from the United Nations, the United States, the United Kingdom, France, Germany, and other countries to share ideas on building an international system of genocide prevention.

Samantha Power, Senior Director for Multilateral Affairs at the U.S. National Security Council, delivered the keynote address. In her remarks, Power explained that the U.S. was implementing a new strategy to make genocide and mass atrocity prevention a permanent responsibility of the U.S. government.

“Governments can improve their ownership and responsiveness to mass killing, but it requires a level of governmental organization that matches the methodical organization characteristic of mass-killings,” she said.

Power, who was joined at the conference by David Pressman, the recently appointed Director of War Crimes and Mass Atrocities at the White House, said, “On President Obama’s instruction, we are building lasting systems.” Power also noted that “gatherings like this one remind us of the force of our convictions, the strength of our numbers, and – above all – the concreteness of the mechanisms and policies we must put in place."

Power has been a significant figure in drawing attention to the world’s failures in responding to past genocides, because of her Pulitzer Prize-winning book, A Problem From Hell.

Among the speakers were the senior human rights and mass atrocities prevention government officials from Europe and the U.S. They included Markus Löning, German Commissioner for Human Rights Policy and Humanitarian Aid; and Alexandre Fasel, Ambassador, Federal Department of Foreign Affairs; Francis Deng, special adviser to the UN Secretary-General on the Prevention of Genocide; Louise Arbour, President of the International Crisis Group; and Piero Fassino, European Union Special Envoy for Burma/Myanmar.

Discussions examined failures of the recent past, as well as current situations where populations are threatened or at risk. On-going conflict and the potential for new violence in Sudan commanded the most attention -- and concern -- throughout the day, with policymakers discussing the best ways to avoid violence in the lead-up to the January referendum on southern Sudan’s secession from the North.

A number of the speakers sought to emphasize the importance of holding perpetrators accountable for the crimes, as a way of deterring future genocides. “The business of punishing these crimes is important to preventing them,” said Stephen J. Rapp, the U.S. Ambassador-at-large for War Crimes. “The challenge is to develop the level of international cooperation so justice will work.”

In a particularly poignant moment, Salih Osman, a human rights lawyer from Darfur, noted that as this esteemed group gathered to discuss genocide prevention, violence continued in Darfur. “Darfur has been marked and defined as genocide for six years now,” Osman said. “Survivors don’t see sufficient acts to stop the genocide.”

Leaders at the conference detailed key gaps in the work of preventing genocide: identifying early warning signs of mass atrocity crimes; increasing international cooperation to address complex crises; designating senior officials responsible for mass atrocity prevention in all governments; expanding the “toolbox” of diplomatic, political and development strategies to resolve conflict; developing the capacity of countries in specific regions to address conflicts in neighboring countries; and supporting accountability as a deterrent to future crimes.

Leaders also agreed on the value of efforts like the Genocide Prevention Task Force and the reforms it has encouraged in the United States, both at the government level and within civil society, since the release of its report two years ago. The Task Force, chaired by former Secretary of State Madeleine Albright and former Secretary of Defense William Cohen, produced an influential policy blueprint for U.S. policymakers. Some of its recommendations have been adopted by the Obama Administration, including the Task Force’s recommendation to create Mr. Pressman’s position and to develop an integrated approach to addressing genocide prevention and response in the form of a new interagency committee devoted to these issues.

The real test of whether atrocity prevention has achieved a priority place in international policy-making will only be witnessed as leaders return to their respective capitals. Will they take the challenge back with them?