For the seventh year in a row, the Early Warning Project ran a comparison survey in December to solicit opinions on countries' relative risks for new mass killing.

By our definition, a mass killing occurs when the deliberate actions of armed groups in a country (including but not limited to state security forces, rebel armies, and other militias) result in the deaths of at least 1,000 noncombatant civilians in that country over a period of one year or less. The civilians must also have been targeted for being part of a specific group.

According to participants, who voted on a series of paired comparisons, the top 30 countries at risk for a new mass killing in 2020 are:

In the list above, countries in bold were experiencing mass killing as of the end of 2018, and most of these mass killings were likely ongoing through 2019 (EWP staff are currently assessing where new mass killings began in 2019).

This survey is part of our effort to experiment with wisdom-of-the-crowd methods for atrocity risk forecasting.

The comparison survey serves the same function as our annual Statistical Risk Assessment (SRA), which uses publicly available data and a machine learning model. Both help focus preventive action where it is most needed by ranking all countries in the world based on their risk for new mass killing.

Unlike our SRA, which has been tested extensively, we do not know how accurate results from the comparison survey are. (We are currently in the process of analyzing data from our crowd forecasting tools and expect to publish findings later this year.) We believe that these survey results can be useful in two ways:

In this post, we highlight the highest-risk country according to survey respondents: Burkina Faso. This is not intended to be a comprehensive assessment, but rather to briefly outline the current conflict dynamics in the country, raising additional questions analysts should consider when assessing risk in countries identified by the survey.

Participants voted Burkina Faso to have the highest risk for new mass killing in 2020, up from 57th in 2019 and 48th in 2018. This varies greatly from Burkina Faso's 55th-place ranking ranking by the Early Warning Project’s Statistical Risk Assessment. This variance highlights the need for additional analysis into the nature of risk in the country.

Burkina Faso has faced an extremist insurgency movement since 2016, with insurgents and security forces alike targeting civilians. According to the Armed Conflict Location & Event Data Project (ACLED), 1,522 civilians in total have been killed across the country from 2016 through 2019. The insurgency recruits from marginalized populations—mostly herders of the Peul/Fulani ethnic group—leveraging perceptions of state corruption and intercommunal tensions over access to food, water, and land to gain supporters. On the other side, state security forces as well as government-aligned ethnic militias commit brutal attacks against mostly Peul/Fulani civilians, who are suspected of uniformly supporting the insurgents. (The situation in Burkina Faso bears similarities to intercommunal conflicts in Mali, which we analyzed in our 2018 report. Mali also falls in the top-ten highest risk countries according to this survey.)

Today, three “Islamist” armed groups with “shifting and overlapping allegiances” are targeting civilians across the country: Ansaroul Islam, the Macina Liberation Front (FLM) faction of the Group for Support of Islam and Muslims (JNIM), and the Islamic State in the Greater Sahara (ISGS). According to ACLED, these groups together killed 526 civilians in 2019. In the same period, state security forces were responsible for 422 civilian fatalities, and the Koglweogo Militia—a community-based ‘self-defense’ vigilante group known for its “rough justice and kangaroo courts”—was responsible for 254 civilian fatalities. 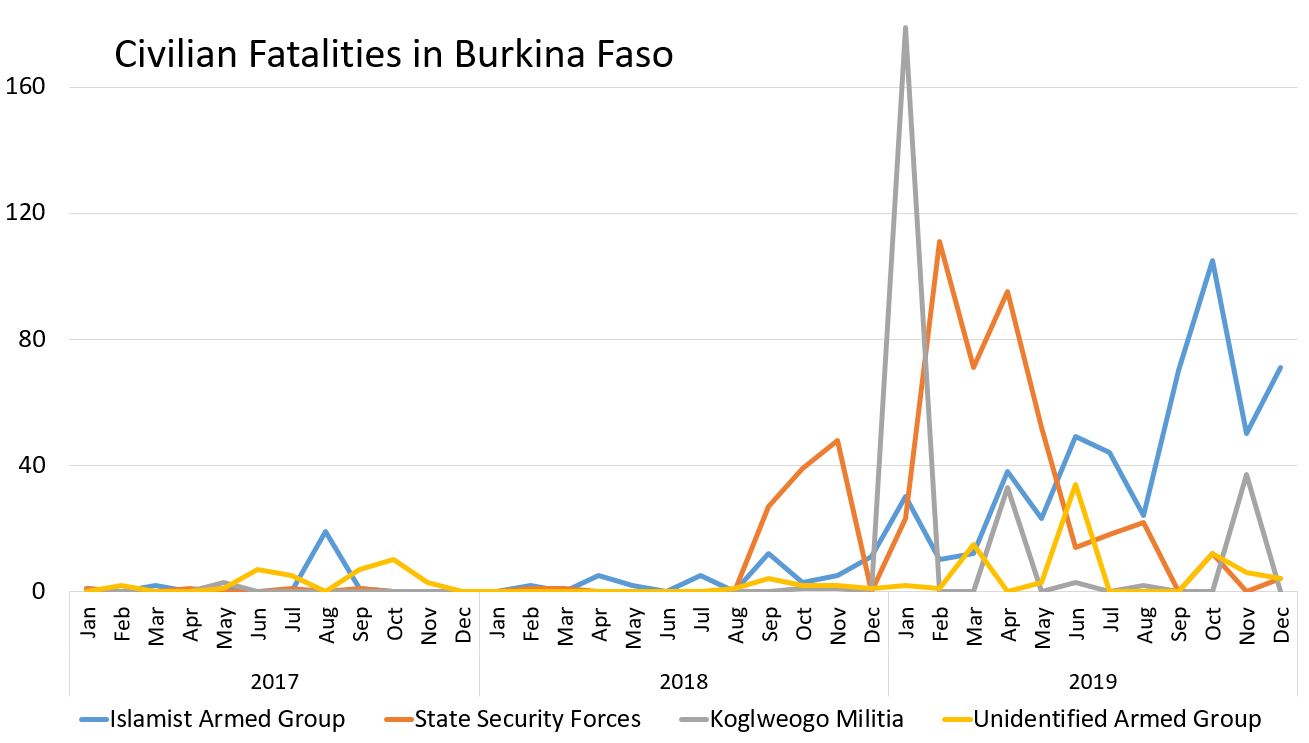 This graph is based on data from ACLED, which defines “Violence against civilians” as “violent events where an organised armed group deliberately inflicts violence upon unarmed non-combatants.” This does not include civilians killed in battle as “collateral damage.”

The highest concentration of violence against civilians has been in the northern Sahel region, with additional incidents in the Centre-Nord, Est, and Nord regions. However, analysts warn of violence moving south to the border areas with Côte d’Ivoire, Ghana, and Benin.

Today, this crisis has numerous destabilizing factors that can drive mass violence, increase grievances, and exacerbate the risk for atrocities.There are currently 1,784 schools closed due to the conflict, mostly in the northern Sahel region, affecting approximately 246,000 children. This lack of education and increasing perceptions of government neglect of certain populations could contribute to armed group support and recruitment. The United Nations Office for the Coordination of Humanitarian Affairs (OCHA) has cited 560,033 people displaced within the country, a 500% increase from the year before (an additional 26,153 Burkinabe are refugees in neighboring countries). Burkina itself hosts approximately 23,000 Malian refugees in the Sahel region. This large-scale displacement means high humanitarian needs and increased resource competition—one of the primary factors contributing to intercommunal conflict. Risk for drought and related food insecurity continues to threaten Burkina Faso and its neighbors. Finally, Burkina Faso will hold potentially contentious parliamentary and presidential elections in November 2020, the outcomes of which, if they are contested, may further destabilize the country.

When assessing future risks in Burkina Faso, analysts should consider the questions raised in the US Department of State/USAID Atrocity Assessment Framework:

Notably, Burkina Faso, and the Sahel in general, made multiple 2020 “to watch” lists in addition to ours — including those of International Crisis Group, the Council on Foreign Relations, and The New Humanitarian.

The annual comparison survey (formerly called “wiki survey”) is one of three quantitative methods used by the Early Warning Project to assess atrocity risk worldwide (see our statistical risk assessments and public opinion pool). Like the opinion pool, the comparison survey methodology draws on a “wisdom of the crowd” approach. Our survey was open to the public for the month of December 2019, and specifically promoted to experts, policymakers, NGOs, and scholars in international affairs.

A pairwise comparison survey involves a single question—in this case, Which country is more likely to see a new episode of mass killing in 2020?—with many possible answers on which participants vote, one pair at a time. The response options presented to participants (all are countries with a population greater than 500,000) are randomly generated throughout the survey period.

The results from our annual comparison survey do not contribute directly to our statistical risk assessments, but they do inform the selection of cases we select for deep-dive qualitative assessments.

We used All Our Ideas to conduct this pairwise comparison survey. For more on how a pairwise comparison survey works, see this working paper by the instrument’s creators. For details on what we mean by “mass killing” and “onset,” see the blog post that led respondents to the survey. We ask about mass killing risk because fatalities are, in general, more consistently reported across cases than other mass atrocity crimes.

We do not know the identities of our survey respondents. Participation in All Our Ideas surveys is anonymous, and our blog post was shared publicly. However, we do know that participants cast 3,491 votes in 83 unique user sessions. Some individuals likely voted in more than one session, so the total count of respondents is some unknown figure less than or equal to 83.

NEXT POST: Graduate Research Assistance (Remote) on Lessons Learned in Preventing and Responding to Atrocities