Stephen Rapp Nominated as Ambassador at Large for War Crimes 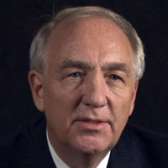 This week, President Obama nominated Stephen Rapp to become ambassador at large for war crimes issues. As a prosecutor at the International Criminal Tribunal for Rwanda (ICTR), Rapp led a landmark case against three Rwandan journalists charged with and found guilty of genocide, direct and public incitement to genocide, and other crimes. In 2006, Rapp left the ICTR to become the prosecutor of the Special Court for Sierra Leone. His nomination as ambassador awaits confirmation by the Senate.

Featured in a gallery of eyewitness testimonies in the Museum's new installation, From Memory to Action: Meeting the Challenge of Genocide, Stephen Rapp explains the importance of pursuing justice and his efforts to always put himself in the shoes of the victim. Watch his testimony and learn more about Rwanda and the ICTR.