States Aren’t the Only Mass Killers

We tend to think of mass killing as something that states do, but states do not have a monopoly on this use of force. Many groups employ violence in an attempt to further their political and economic agendas; civilians often suffer the consequences of that violence, and sometimes that suffering reaches breathtaking scale.

This point occurred to me again as I thought about the stunning acts of mass violence that Boko Haram has carried out in northern Nigeria in the past few weeks. The chart below comes from the Council on Foreign Relations’ Nigeria Security Tracker, an online interface for a data set that counts deaths from “violent incidents directed at government property, places of worship, and suicide bombings.” The sharp upward bend at the far right of that red line represents the sudden and brutal end of several hundred lives in the past two months in various towns and villages in a part of the world that surely isn’t as alien to Americans as many of us assume. In Nigeria, too, parents wake up and set about the business of providing for themselves and their families, and many kids toddle off to school to learn and fidget and chatter with friends. Over the past few years, Boko Haram has repeatedly interrupted those daily routines with scores of attacks resulting in thousands of murders. 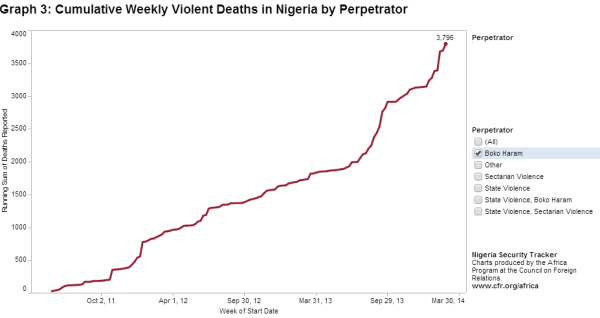 I suspect the tendency to see mass killing as the purview of states is driven by the extraordinary salience of two archetypal cases—the Holocaust, of course, but also the Rwandan genocide. From those examples, we infer that violence on this scale requires resources, organization, and opportunity on a scale that in “modern” times only states are supposed to possess. The Holocaust took this bureaucratic logic to unique extremes, but many accounts of the Rwandan genocide also emphasize state planning and propaganda as necessary conditions for that episode of mass murder in extremis.

It’s true that resources, organization, and opportunity facilitate mass violence, and that states are much more likely to have them. In some contexts, though, rebel groups and other non-state actors can accumulate enough resources and become well enough organized to kill on a comparable scale. This is especially likely in the same contexts in which states usually perpetrate mass killing, namely, in civil wars. In some wars, rebels manage to establish governance systems of their own, and the apparent logic of the atrocities committed by these quasi-states looks very similar to the logic behind the atrocities perpetrated by their foes: destroy your rival’s base of support, and scare civilians into compliance or complicity.

Rebels don’t need to govern to carry out mass killings, though, a point driven home by groups like the RUF in Sierra Leone, the Seleka and anti-balaka militias in the Central African Republic, and, of course, Boko Haram. Sometimes the states we now expect to protect civilians against such violence are so weak or absent or uncaring that those non-state groups don’t need deep pockets and sprawling organizations to accomplish mass murder.

On Boko Haram, CFR’s John Campbell observes that, “Several of the most recent incidents involve government security forces unaccountably not at their posts, allowing Boko Haram freedom of movement. The governor of Borno state publicly said that Boko Haram fighters outgun government forces.” Campbell also notes that those security forces might be shirking their duty because they are poorly paid and equipped, and because they simply fear a group that “has a long tradition of killing any person in the security services that it can.” With a state like that, the resources and organization required to accomplish mass murder are, unfortunately, not so vast. What is required is a degree of ruthlessness that most of us find hard to understand, but that incomprehensibility should not be confused with impossibility.

Acts we conventionally describe as “terrorism” nowadays are also atrocities by another name, and so-called terrorist groups occasionally succeed in their lethal business on an extraordinary scale. Al Qaeda’s attacks on September 11, 2001, certainly qualify as a mass killing as we conventionally define it. Nearly 3,000 noncombatant civilians from a discrete group (Americans) were deliberately killed as part of a wider political conflict, and all in a single day. The torrent of car bombings and other indiscriminate attacks in Iraq in recent months has surely crossed that arbitrary 1,000-death threshold by now, too.

For analytical purposes, it would be useful to have a catalog of episodes in which non-state organizations committed atrocities on such a large scale. That catalog would allow us to try to glean patterns and develop predictive models from their comparison to each other and, more important, to situations in which those episodes did not occur. Even more useful would be a reliable assemblage of data on the incidents comprising those episodes, so we could carefully study how and where they arise and accumulate over time, perhaps with some hope of halting or at least mitigating future episodes as they develop.

Unfortunately, the data we want usually aren’t the data we have, and that’s true here, too. The Uppsala Conflict Data Program (UCDP) has compiled a data set on “one-sided violence,” defined as “intentional attacks on civilians by governments and formally organized armed groups,” that includes low, high, and best estimates of deaths attributed to each perpetrator group in cases where that annual estimate is 25 deaths or more (here). These data are an excellent start, but they only cover years since 1989, so the number of episodes involving non-state groups as perpetrators is still very small. The Armed Conflict Location & Event Data Project (ACLED) compiles detailed data (here) on attacks by non-state groups, among others, but it only covers Africa since 1997. New developments in the automated production of political event data hint at the possibility of analyzing deliberate violence against civilians around the world at a much higher resolution in the not-too-distant future. As I’ve discovered in an ongoing efforts to adapt one of these data sets to this purpose, however, we’re not quite there yet (see here).

In the meantime, we’ll keep seeing accounts of murderous sprees by groups like Boko Haram (here and here, to pick just two) and CAR’s Seleka (here) and anti-balaka (here) alongside the thrum of reporting on atrocities from places like Syria and Sudan. And as we read, we would do well to remember that people, not states, are the the common denominator.

PS. In the discussion of relevant data sets, I somehow forgot to mention that the Political Instability Task Force also funds the continuing collection of data on “atrocities” around the world involving five or more civilian fatalities (here). These data, which run all the way back to January 1995, are carefully compiled under the direction of a master of the craft, but they also suffer from the inevitable problems of reporting bias that plague all such efforts and so must be handled with care (see Will Moore here and here on this subject).

NEXT POST: Will the UN Human Rights Council Adopt a Resolution on Sri Lanka?