Mali at Risk for Mass Atrocities

The Simon-Skjodt Center for Prevention of Genocide recently concluded the field research portion of our latest Early Warning Project country assessment, focusing on plausible scenarios that could lead to mass atrocities in Mali. This post discusses how we selected Mali as a country of focus and provides a preliminary update on the results of our research. The first steps towards effective prevention are to acknowledge that mass atrocities could actually happen and seek to understand how the unthinkable could plausibly occur. Only then can influential actors develop effective prevention strategies. This is the third Early Warning country report we will produce, with the goals of enriching the discussion of early warning for mass atrocities and demonstrating how systematic early warning can serve as a useful input in policy discussions.

How we chose Mali

Mali has consistently been in the top 10% of countries at risk, ranking 9th, 13th, and 8th out of 162 countries in the 2014, 2015, and 2016 SRAs. We see this consistency as a strong indication that the models are detecting real, significant risks, not just some statistical peculiarity. In 2016, Mali had a 4% risk for mass killing. Note that mass killings are very low probability events (the highest risk in the 2016 assessment is just 7.3%); however, because of the severity of their impacts when mass killings do occur, we consider even low probability events to be worth taking action to study and prevent.

Second, we identify and interview country experts—based in Mali and internationally—to learn more about the specific risks in the country and whether the country’s civilians, policymakers, NGO advocates, and scholars working on the country might benefit from in-depth research.

On Mali, our initial expert consultations suggested that there were recent and ongoing trends, such as increasing intercommunal tensions and spreading jihadist influence, that posed atrocity risks, yet were not being sufficiently analyzed or addressed. The vast majority of policy attention on Mali, we heard, was focused on counterterrorism and countering violent extremism. Thus, we judged that an assessment of mass atrocity risks would help fill a gap and complement ongoing work.

We recognize that we do not have the capacity to safely and effectively conduct research in many of the countries identified as high risk. We do not want to put our researchers or the people they talk to in danger, so some countries are disqualified for feasibility reasons.

Our field research, led by an Early Warning Fellow with extensive experience in Mali and throughout the Sahel, began in Niamey and progressed from Gao through Mopti, finishing in Bamako. This series of interviews—with representatives and members from various armed groups, Malian and US government officials, MINUSMA representatives, Malian civil society, other conflict researchers, and local and international NGOs—was designed to better understand the root causes of conflict, current conflict dynamics, and risk for mass atrocities. 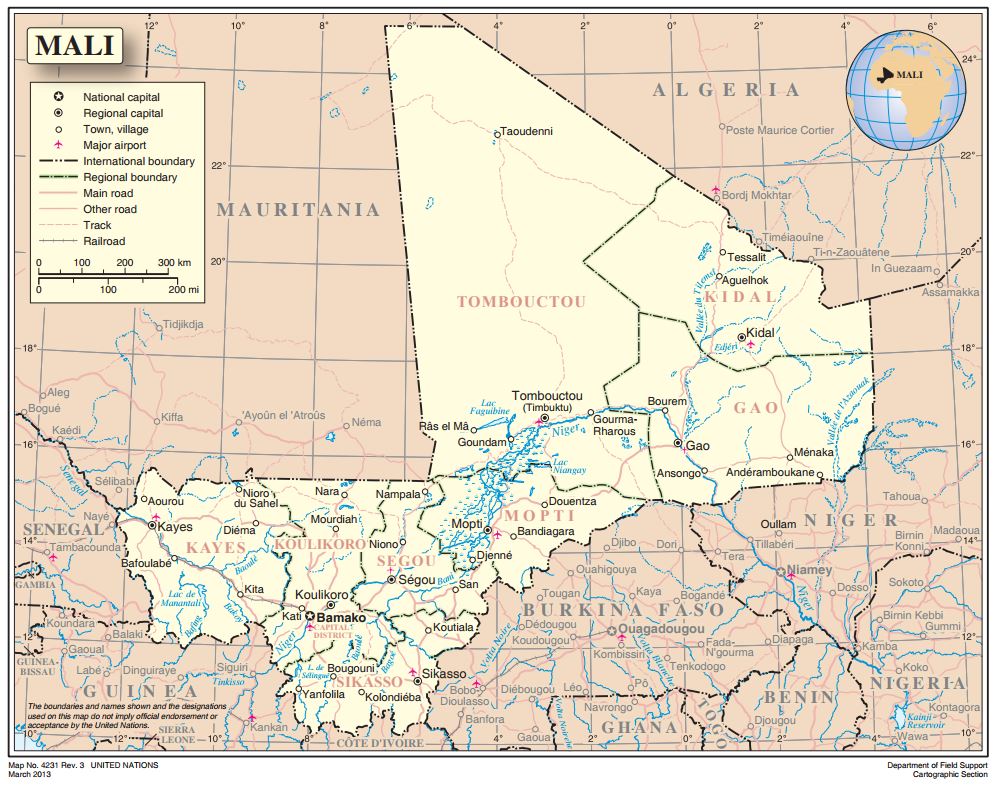 The scenario mapping report will focus on three regions where there are ongoing and potential conflicts that present the highest risk for violence against civilians: (1) Kidal; (2) Gao; and (3) Mopti. In Kidal, a region heavily affected by the 2012 rebellion, we identified a risk for new violence between mostly Tuareg communities supporting opposing signatories to the June 2015 peace accords. As the peace process stalls and former combatants await the promised disarmament, demobilization, and reintegration (DDR) process, upcoming local elections this fall pose a threat to the current tenuous stability and violence is already increasing. In Gao (and through Gourma to Timbuktu), a region that borders the countries of  Niger and Burkina Faso, the main risk of violence relates to inter-group dynamics between the various classes, ethnicities, and ideologies competing for access to power. And in Mopti we observed a concerning rise of jihadism in the face of decades of insufficient government attention and engagement. That, along with climate change and the increased competition for resources it brings, is rapidly destabilizing an already tenuous intergroup equilibrium between traditionally sedentary and semi-nomadic groups.

Future of the project

The report the Center will publish based on this research will outline plausible scenarios that could lead to mass atrocities in Mali. We spotlight plausible scenarios to help tell the story about how underlying risks could translate into large-scale violence. This kind of narrative can help combat people’s natural tendency to dismiss low probability events like mass atrocities as unthinkable.

We will publish a paper this fall outlining the scenarios mentioned above and providing targeted recommendations to influential actors in Mali and the region. For questions about our research, please contact Mollie Zapata at mzapata@ushmm.org.

PREVIOUS POST: The Portal: A Real-Time Conversation with People Forced to Flee Violence