Today the Museum opened a new exhibition entitled, “Syria: Please Don’t Forget Us.” The exhibition provides information on the conflict in Syria where the Syrian government is perpetrating well-documented crimes against humanity against its own citizens. It tells the story of one man’s journey to raise awareness about the Syrian government’s practice of arresting and detaining in secret its own citizens.

The Syrian government is detaining more than 100,000 men, women and children; they are known as “the disappeared” because their families are not told of their fates. Those in custody are starved, beaten, and tortured. Many of them have been killed.

Mansour Omari, a human rights activist, was detained for almost a year. He and his fellow prisoners mixed rust from prison bars with their own blood to create ink and then used a chicken bone as a writing implement to record the names of 82 fellow prisoners on five scraps of cloth. They hoped this information could be smuggled out and their families would learn of their whereabouts. Mansour was able to smuggle these scraps out of prison.

After his release, Mansour contacted the families of those detained, and is now using the cloths to educate the public about the conflict in Syria and the government’s strategy of “disappearing” people. He also hopes, one day, to use the cloths as evidence of the crimes committed by the Assad regime to hold perpetrators in Syria accountable for mass atrocities against civilians.

Mansour brought these artifacts to the Museum, where our conservators aided in their preservation to help tell this story. The five pieces of cloth are on display in the exhibition, as well as the notebook Mansour used to transport the cloths.

The exhibition also presents a film about Caesar, a military photographer forced to take pictures of detainees killed in custody. Caesar defected from Syria, and smuggling out with him 55,000 images on flash drives hidden in his shoes. One of Caesar’s flash drives is on display as is a cell phone he used to take the pictures that link the Assad regime to the torture and killing of those in custody.

Mansour and Caesar’s stories demonstrate the power of individual actions.

Why Does the Museum Have an Exhibit on Syria?

The Museum is a living memorial to the Holocaust and works to raise awareness about contemporary mass atrocities. As Elie Wiesel wrote in the Museum’s founding document: “A memorial unresponsive to the future would violate the memory of the past.” A core part of the Museum’s mission is to be a voice for victims of mass atrocities, which the Jews of Europe did not have during the 1930s-40s.

The Syrian government is perpetrating well-documented crimes against humanity against its own citizens. More than 500,000 people have been killed and 11 million people have fled their homes.

The Museum is committed to shedding light on those atrocities and is working with Mansour, Caesar, and others to tell their stories and preserve evidence of these crimes which may be used to hold the perpetrators accountable in the future. 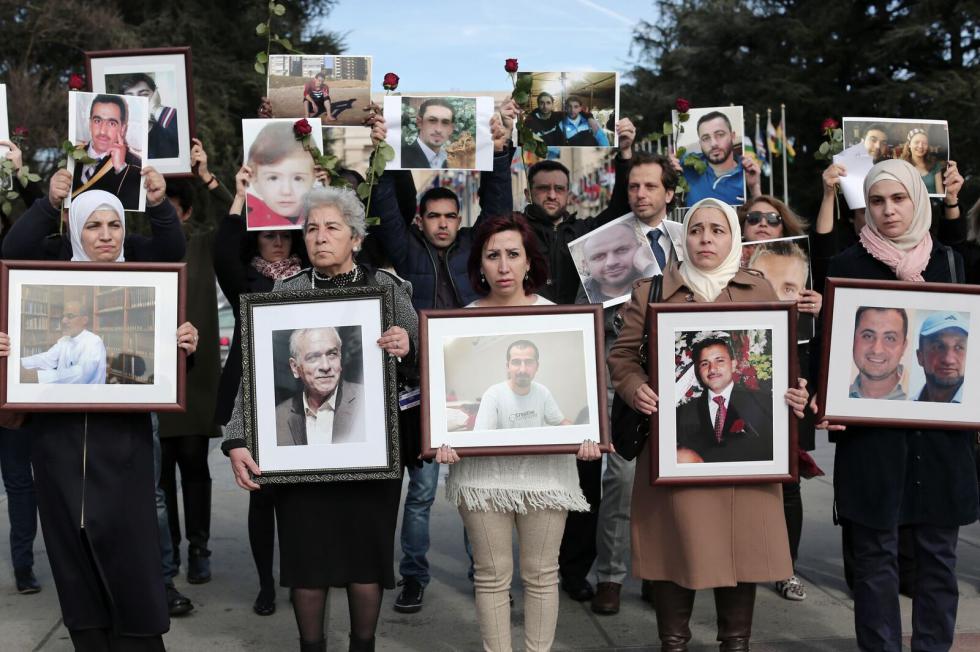 During peace talks in Geneva in February 2017, Syrians hold images of loved ones disappeared by Syrian government forces over the course of the six-year war. —Dylan Collins

The Museum has brought attention to the atrocities being committed in Syria since the conflict’s outbreak almost seven years ago. Through programs, public statements, events with decision makers, and this and previous exhibitions, the Museum is committed to educating people about the crimes against humanity being committed by the Assad regime and ISIS in Syria, holding the perpetrators accountable, and advancing policy discussions about what more could and should be done to protect civilians and end atrocities there.

Our permanent exhibition is a reminder that the Holocaust did not happen to statistics, but to individuals. We find that visitors often find it difficult to grasp the enormity of the crimes being committed when the number of killed, displaced, and affected is so vast. More than 500,000 people in Syria have been killed and more than 11 million have fled their homes. Focusing on the story of Mansour, and his journey, allows visitors to understand the human dimension of the crisis.

The vast majority of the 500,000 killed in the conflict have been civilians. There is a growing movement toward justice and accountability in Syria, which we know through the literature on genocide prevention is an important element in avoiding a return to future violence.

Documenting these crimes and its victims, as Mansour has done, provides closure to victims’ families but also guards against future revisionism and denial.

Our aim is to remind our visitors that these atrocities are continuing and that we, collectively, have a responsibility to not forget and advance responses that will ultimately end the violence. We also hope to foster a discussion among decision makers about how lives can be saved and perpetrators held accountable.

As Elie Wiesel always reminded us, the Holocaust proved the very real cost of inaction. The Museum’s legacy compels us to speak on behalf of victims and work to stop these atrocities.

PREVIOUS POST: Which countries are most likely to see new mass killing in 2018?

NEXT POST: Museum Calls Attention to Crisis in South Sudan with Special Exhibition