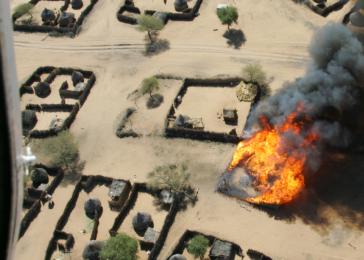 The burning of Um Ziefa in Darfur, Sudan. December 12, 2004. —Brian Steidle for US Holocaust Memorial Museum

On July 30, the Museum updated its Google Earth initiative Crisis in Darfur with the latest U.S. Department of State data that sheds new light on the extent of the genocide in Darfur.

The new data shows that more than 3,300 villages have been damaged or destroyed, primarily between 2003-2005, in the Darfur region of Sudan. This is more than twice the number that was identified in previous U.S. government assessments and strengthens the evidence of a vast, targeted campaign of destruction against civilians.

Stay tuned for additional features in Crisis in Darfur, including a narrated flyover tour and a map of destroyed villages by year.

Learn more about the current situation in Sudan; view the press release announcing the update; and read about it in The Washington Post (external link).