Museum Joins with Ben Affleck to Raise Awareness about the Congo 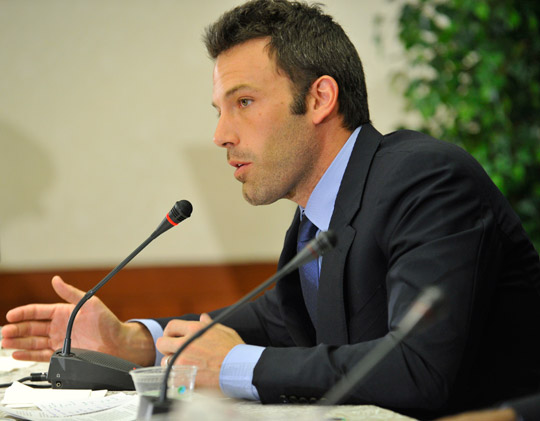 In an event last night co-hosted by the Museum, Ben Affleck and Senator John Kerry came together with a panel of experts to speak about policy options for resolving the conflict in eastern Democratic Republic of the Congo (DRC). Founder of the Eastern Congo Initiative, a U.S. based advocacy and grant-making group, Ben Affleck spoke about the need to unite peacemaking efforts in eastern Congo and to do so now, before Congolese elections in 2011 raise additional new challenges.

“Every voice that sends a message of concern helps to awaken those who need to take action,” said Ambassador Johnnie Carson, the Assistant Secretary of State for African Affairs, echoing Affleck’s call. Describing the DRC as a nation that defies easy solutions, Carson noted that the fact that Congo is even holding elections in 2011 – previously in doubt -- should be welcomed as sign of progress. In response, independent analyst Anthony Gambino expressed concern that the international community is nowhere near where it should be in preparing to support the elections and that the previous poll, in 2006, only took place because of massive international support. Gambino emphasized that for elections in 2011 to be considered minimally successful, they must be at least as free, fair, and peaceful as those in 2006.

Joining the Ambassador on the panel, Mvemba Dizolele, an expert policy analyst, reflected on the danger of focusing exclusively on the DRC’s eastern region. “When we miss the story that is happening in 80% of the country, then we miss the picture,” Dizolele said. “Because what’s happening in the east is happening exactly because of what is not happening in the rest of the country.” Widening the lens of analysis, Dizolele described the failures of the Congolese government in Kinshasa to meet the needs of its entire population, which suffers from insecurity and poverty, regardless of region.

Throughout the discussion, attention was repeatedly drawn to the lawless and predatory behavior of the Congolese military, the FARDC, which has incorporated rebel commanders and soldiers into its ranks in an effort to satisfy peace deals. Ostensibly tasked with safeguarding the Congolese people, the FARDC has been accused of committing widespread atrocities and establishing criminal networks in eastern Congo. Noting the tragic contradiction, a newly published UN report by the Group of Experts on the DRC states, “President Joseph Kabila has publicly recognized that the involvement of criminal networks within the Forces armées de la République démocratique du Congo (FARDC) in the illegal exploitation of natural resources has created a conflict of interest with the army’s constitutional security mandate.”

Although pressing, security reform is only one of the many challenges facing the Congolese. Recent high-profile attempts by the international community and the FARDC to combat eastern Congo’s dominate rebel force, the FDLR, have fallen short of expectations and, in some cases, resulted in reprisal attacks on civilians. The UN report explains:

The arrests in Europe of senior political leaders of the Forces démocratiques de liberation du Rwanda (FDLR) has signaled stronger international resolve to bring to justice those who command and represent the group from afar. Yet the Group [of Experts] has found that impact of those arrests on the morale of combatants and their military leaders has been more limited than expected. FDLR increasingly works with other armed groups, including former enemies, to attack and loot both civilian and military targets.

Despite the scale and complexity of the issues in DRC, neither the UN report nor the panelists suggested the situation was hopeless, a point emphasized in the opening remarks by Museum director Sara Bloomfield, “This is not a crisis already resigned to history, but an ongoing and perilous reality. For some there is the perception that this complicated issue is unsolvable, but with so many civilians still so painfully vulnerable, we must continue to raise awareness of the crisis and encourage those who seek ways to resolve it.”