Is the Worst Yet to Come? Event Marks Seven Years of Conflict in Syria

On March 15, the Simon-Skjodt Center for the Prevention of Genocide marked seven years of the commission of mass atrocities in Syria and honored the work of civil society groups working to save civilian lives. The event featured a panel discussion with Mounir Mustafa, Deputy Director of the Syria Civil Defense—known as the White Helmets—Dr. Samer Attar of the Syrian American Medical Society (SAMS), and Rafif Jouejati of the Foundation to Restore Equality and Education (FREE-Syria). The panel was moderated by Simon-Skjodt Center Deputy Director Naomi Kikoler who, along with Program Assistant Janelle Roberts, undertook a Bearing Witness trip to the Syrian border and produced a report on their findings. US National Security Adviser, Lt. Gen. H.R. McMaster provided a keynote address, condemning the brutality of the Assad regime and its allies and outlining how the US government is responding to the conflict. After the panel discussion, Holocaust survivor and Museum volunteer Irene Weiss closed the program.

Read the report: "Is the Worst Yet to Come? Ongoing Mass Atrocity Risks in Syria" 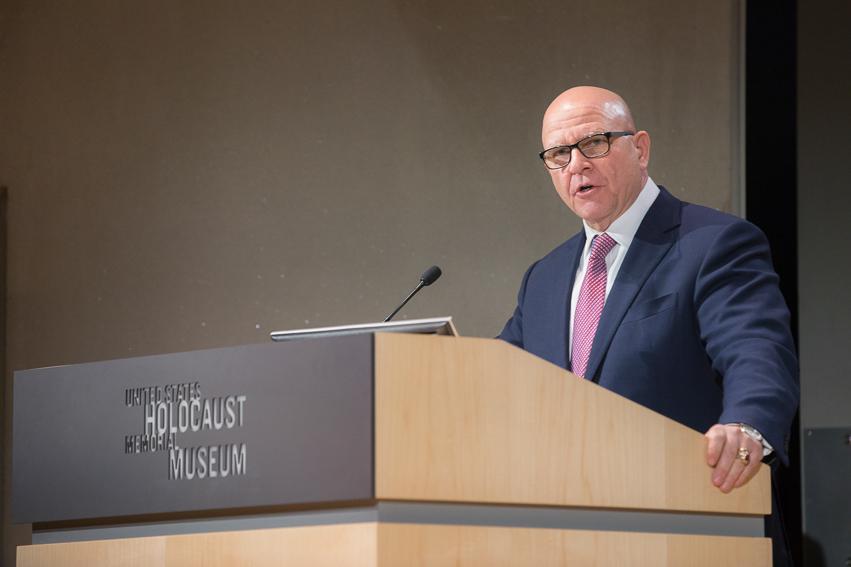 In his address, Lieutenant General McMaster reminded the audience that—regarding both the Holocaust and contemporary conflicts—simply remembering the victims is not sufficient. “We cannot stop at remembrance alone. If we are to fulfill our promise, ‘Never Again,’ we must also act to protect victims and to hold all responsible parties accountable.” He condemned the atrocities committed by the Assad regime, its allies, and the so-called Islamic State (ISIS) and outlined what the Trump Administration is doing to respond to the violence in Syria. McMaster paid particular attention to the negative role that Iran and Russia have played in Syria.

Iran’s goal is to secure a permanent military foothold in Syria, which would threaten Israel, undermine U.S. interests, and strengthen the terrorist and proxy forces that Iran uses to weaken Arab states and foment violence… The Russian government has bombed civilian areas and provided political cover for Assad’s crimes. Furthermore, Russia has done nothing to encourage Assad to ensure delivery of humanitarian aid, respect ceasefires and de-escalation agreements, or comply with UN Security Council Resolution 2254’s call for a UN monitored political process.

Making the case for holding Assad’s enablers accountable, he said, “It is time to impose serious political and economic consequences on Moscow and Tehran. Assad should not have impunity for his crimes, and neither should his sponsors.” Finally, McMaster remarked on the individual nature of the commitment to Never Again. “Preventing genocide and mass atrocities falls on all of us. Every nation, and every person, must share this responsibility.”

The audience then viewed footage of a rescue mission in Eastern Ghouta, provided by the Syria Civil Defense.

The panelists discussed the myriad threats facing Syrian civilians—the dropping of barrel bombs in populated areas, the use of chemical weapons, sniper attacks, and forced starvation through besiegement. “All of these crimes that have been committed against the Syrian people from seven years ago to this day is for one reason,” Mr. Mustafa said. “Because these people wanted to live in freedom and dignity.” They also discussed the intentional targeting of hospitals and aid workers by the Assad regime and Russian war planes. As Dr. Attar noted, “Destroying hospitals is just another creative way of mass murder, because it doesn’t just kill the patients and medics in the hospital, it kills all the future patients that that hospital could save.”

The panelists underscored the general sense of hopelessness and abandonment that Syrians feel after enduring seven years of brutality. “The blame extends beyond the regime, and Russia, and Iran, and Hezbollah,” Ms. Jouejati said. “I would accuse the entire international community, squarely, for its inaction…. The Assad regime has been allowed and perhaps encouraged to act as it chooses. Russia has been allowed to act as it chooses. When Russia is guilty of dropping bombs on civilian structures—hospitals, schools, marketplaces—the world is complicit in merely issuing condemnations.” The Russian government, which intervened in 2015 to support the Bashar al Assad regime in Syria, has taken a lead role in both international negotiations and aerial campaigns targeting opposition-held territory in civilian areas. With Russian support, the Syrian regime ramped up the bombing of civilian areas in the province of Idlib and the towns of Eastern Ghouta outside the capital, Damascus in February 2018.

How many Syrians have to be killed for the international conscience to be moved?” asked Mustafa. “How many chemical attacks does it take for us to say that the Assad regime has crossed the red lines? How many barrel bombs have to be dropped on top of the homes of Syrians for the world to decide that the Syrian regime should not be allowed to fly planes over civilian areas? 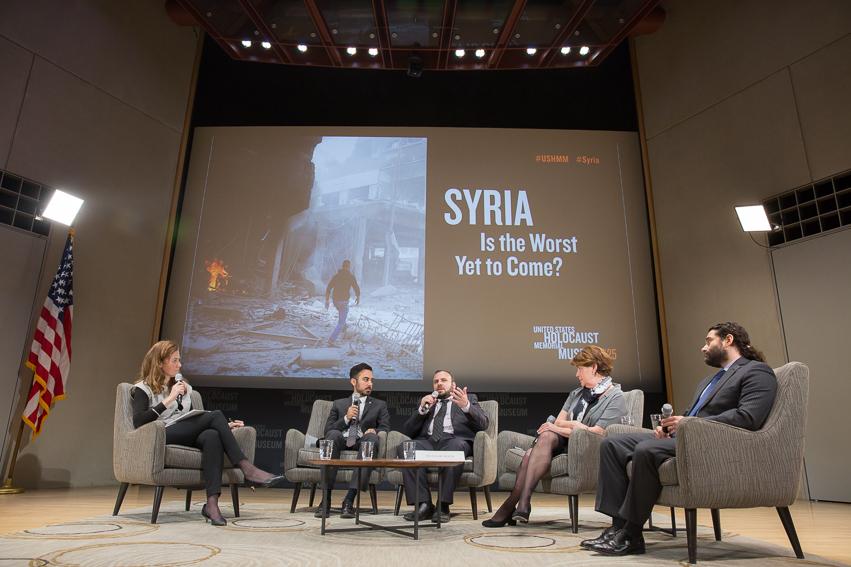 Panelists discuss ongoing atrocities against civilians in Syria and how Syrian civil society is responding to the violence. —US Holocaust Memorial Museum

A major finding of the Simon-Skjodt Center’s report was that the violence is likely to get worse, contrary to the perception that the conflict is nearing its end. The panelists all agreed with this prediction. “Unfortunately, the killing will continue to get worse in the weeks to come and we continue to see the campaign against Eastern Ghouta intensifying day after day” Mustafa noted. “What we all fear is what is happening in Eastern Ghouta will be a replica of the horrific atrocity that happened in Aleppo, whereby the regime and Russia are bombing and starving...and then, after numerous atrocities are being committed, they will all be forcibly displaced from their homes.” He referenced the fall of the eastern city of Aleppo in 2016 after four years of besiegement by the Syrian government. After cutting off access to the city and bombing homes, schools, and hospitals for years, the regime enforced an evacuation of opposition-held areas, driving thousands from their homes. Russian and Syrian military officials have pointed to the tactics used in Aleppo as a model for the recapture of Eastern Ghouta from opposition forces.

When asked what can and should be done to put the focus back on protecting civilians and saving lives, the speakers highlighted the role that individuals around the world can play. “Supporting our [civil society] organizations is only dealing with the results or the symptoms of the conflict” Mustafa said. “If people around the world, instead of just giving money to these organizations, if they come together to urge their governments to stop the cause of this conflict, then we won’t need the contributions to support the civil society and the relief work.” Dr. Attar suggested that concerned Americans, who might not be able to travel to neighboring countries to help deliver aid, can write op-eds in their local paper and speak to their elected officials to demand action. 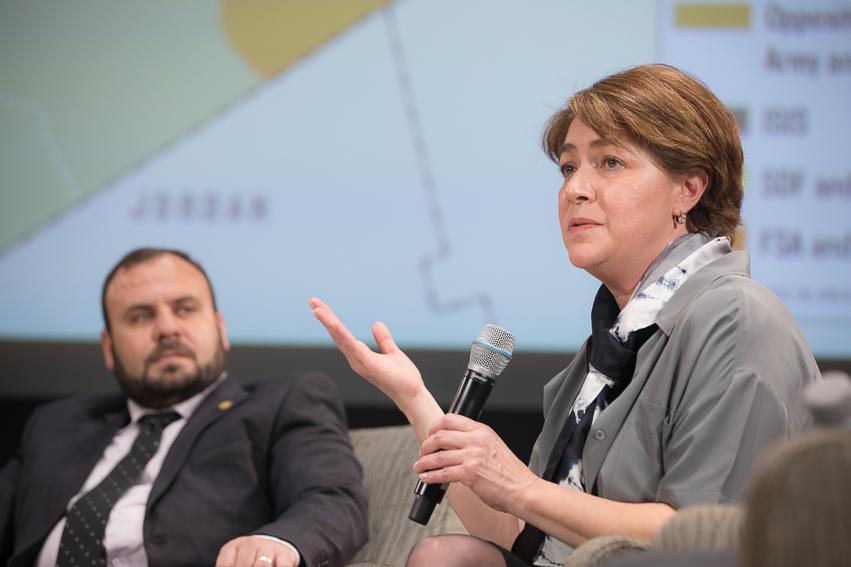 Mounir Mustafa from the Syria Civil Defense and Rafif Jouejati from FREE-Syria. —US Holocaust Memorial Museum

“Never Again should not be a sound bite,” Jouejati told the audience. “Repeat that to your Representatives, repeat that in your writings, repeat that in your communications, repeat that when you go to your house of worship or when you go to dinner with friends. Never Again. Never Again. You have to keep saying it. As American citizens, we have the freedom to contact our representatives and say ‘I demand that you raise your voice so that Never Again is not a sound bite’.” Mustafa appealed to basic human dignity. “The Syrian people have lost faith in the governments in the international community, but they have not lost faith in the people around the world.”

Despite the brutality of the Assad regime and its allies, and despite seven years of the international community doing little to stop it, the people of Syria continue to do what they can to help each other. Jouejati noted that there are more than 900 registered civil society organizations in Gaziantep, Turkey alone. These organizations have been established since the start of the conflict, many by Syrians who fled, but are committed to support civilians who remain inside Syria. Speaking of his organization, the White Helmets, Mustafa noted, “These are people who are ordinary people from all walks of life—carpenters, plumbers, all different kinds of people—who put their lives on hold to save others.” As the Simon-Skjodt Center report notes, civil society—in addition to providing critical services—is playing an active role in pushing back against extremists.

Dr. Attar told the audience about the janitor of the hospital where he volunteered in Aleppo, who would rather remain in Syria than “drown on a boat trying to get some place where he wouldn’t be welcomed.” “People like him taught me that there are ways to fight terrorism and oppression that don’t require guns and bombs and bullets. Sometimes all you have to do is find something that you’re good at and channel it and show up and do your job. And it’s those little things that add up.” Jouejati summed up the spirit of the Syrian people this way. “One of the things that has characterized the Syrian revolution…is resilience. I don’t think there is one more resilient than he or she who has watched their home collapse under the weight of a barrel bomb...I don’t think there’s a people more resilient who will take their children to the hospital clutching their internal organs.” 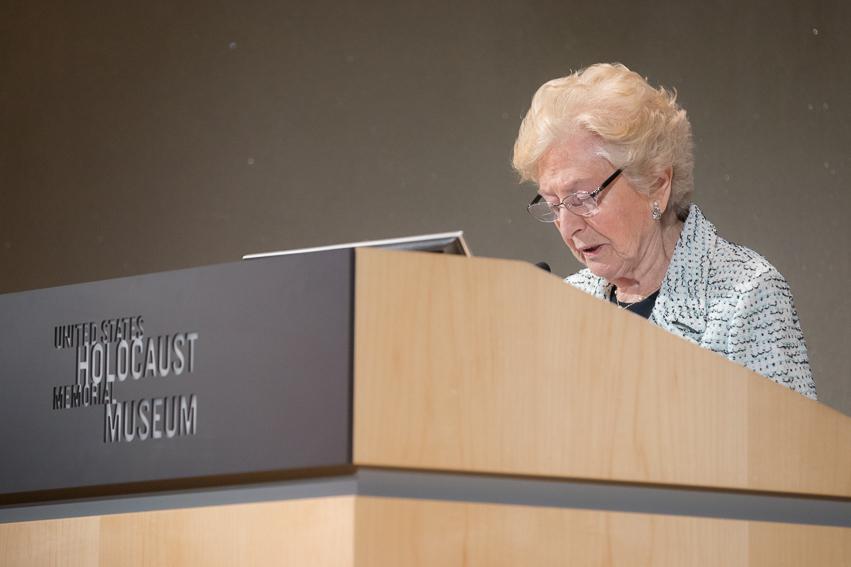 After the panelists answered questions from the audience, Holocaust survivor and Museum volunteer Irene Weiss stepped forward to give closing reflections. “When I see the photographs of the thousands of Syrian families struggling to survive and desperate to flee from the war, it brings me back to another time, when my family and millions of others were stateless refugees, with nowhere to go.” She told the audience about how she and her older sister were forced to labor at Auschwitz as they watched countless people walk to their deaths. If only the world knew, she thought, surely someone would stop the killing. “It is tragic that over 70 years later, the world is faced with a regime in Syria that commits hideous atrocities against its own citizens. In Syria we see that innocent civilian population is dispensable. Assad sacrifices his population to achieve his war aims.” As McMaster and the panelists before her, Mrs. Weiss stressed that the prevention of atrocities is a shared responsibility. “Humanity’s vulnerability to hate and violence demands constant vigilance and a readiness to speak out against those who seek to dehumanize and divide us.”

For more information on the Simon-Skjodt Center’s work on Syria, visit the Museum’s YouTube page. To learn more about the war in Syria and the impact on civilians, visit our Syria case page.