The following remarks were delivered on March 5, 2020 by Alfred Münzer at the US Holocaust Memorial Museum as part of a public program about the Chinese government's systematic persecution of the Uyghur people and other Muslim minorities on the basis of their religion and ethnicity.

I was born in the Nazi-occupied Netherlands. And I am only able to stand before you today because a Dutch-Indonesian family and their Indonesian Muslim nanny risked their lives to rescue a 9-month-old Jewish baby. Tolé Madna, the three Madna children, and their nanny, Mima Saïna, cared for me and protected me from the Nazis for three long years. They shared their meager food allowance with me because I did not legally exist and was not entitled to ration coupons. They made sure I did not ever come near a window for fear that passersby might see a very different looking child. I slept in Mima’s bed and she kept a knife under her pillow vowing to kill any Nazi who might come to get me. But what I remember most, is being surrounded by love and laughter.

My sisters, Eva and Leah did not share my good fortune. They had been entrusted to a different family but were betrayed and denounced to the Nazis and killed in Auschwitz. They were 7 and 5, two of 1.5 million children killed in the Holocaust. 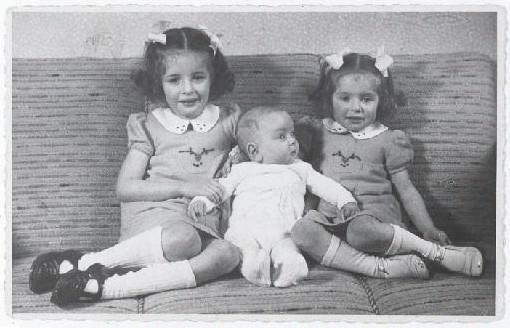 Alfred Münzer with his sisters, Eva and Leana at their home in The Hague. —US Holocaust Memorial Museum, courtesy of Alfred Münzer.

My parents too were deported. My father was liberated 75 years ago by the US Army but succumbed two months later to the effects of starvation and lies buried in the former Ebensee concentration camp.

My mother survived twelve concentration camps and I was reunited with her in August 1945. It’s the first clear memory I have. I was asleep in one of the rooms in the back of the house when my one of the Madna children, Dewie Madna, came to get me and carried me into the living room where the whole family was gathered in a circle. I was cranky and unhappy at being awakened and so they did what you do with a cranky child, they passed me from one lap to the next. But there was one lap I refused to sit in. One woman, I kept pushing away. That woman was my own mother. She was a complete stranger. My mother was Mima Saïna.

Mima Saïna could not read or write and did not speak the Dutch language, only the language of her native Indonesia. But Mima Saïna had a heart of gold and cared for this Jewish baby as if it were her own. People asked Tolé Madna why he risked the lives of his family to take in a Jewish baby. His response was a simple, “What else was I to do?”

I have very few memories of Mima Saïna. But a few years ago I shared the story of my rescue by the Madna family with a group of students from Indonesia and told them that the only memory I had of Mima was a lullaby she used to sing to me and it was called "Nina Bobo." And suddenly the entire group began to sing "Nina Bobo" in perfect unison and young men and women then came up to me and embraced me and said, “we are family.”

Those simple eloquent words, “we are family,” describe why we are all here today. It is to foster a world where no one is viewed as “the other” and a world that celebrates our common humanity.

NEXT POST: The Private Sector and Atrocity Prevention: Lessons from Côte d’Ivoire