Genocide Prevention Rather Than Response Gains Favor in Policy Circles 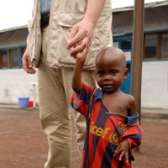 John Heffernan discusses his recent trip to the Congo and the importance of genocide prevention in an editorial piece (external link) published on May 22 in the Huffington Post:

"Last week, the United Nations Security Council traveled to Ethiopia, Rwanda, Congo and Liberia to discuss Africa's hotspots—areas that are threatened by genocide and mass atrocities. In a report on preventing genocide, former Secretary of State Madeleine Albright and former Secretary of Defense William Cohen make the case for why preventing and responding to genocide and mass atrocities is in the moral and strategic interests of the United States. The 140 page report lays out 34 recommendations to point out a choice between doing nothing and embarking on large-scale military interventions. A recent trip I took to the Great Lakes region of Africa dramatically illustrated why this 'blueprint' should be taken seriously, and why U.S. leadership is so important in this area.

"In the dirt courtyard outside the United Nations-funded hospital wing, in the war-affected border city of Goma in the Democratic Republic of the Congo, I met Jean Paul, his tiny legs barely holding up his small torso. Inside the white stucco building, other children from the nearby displacement camp were not so lucky as they clung for life, skin hanging off their bones. Jean Paul, who had the most endearing brown eyes, managed to muster enough energy to lift his little hand to give me the internationally recognized high five. Although he appeared to be on the road to recovery, this child of war, who looked to be no more than two years old, held up five fingers when I asked him his age. Jean Paul, a vivid reminder of the consequences of the horrific human toll exacted by mass atrocities and genocide inflicted by man, may also be a reminder of humanity's capacity to prevent such episodes; episodes in which tens of millions have lost their lives over the last century.

"I have seen it before in Darfur, Bosnia, Afghanistan, Kosovo and most recently Rwanda and Congo, the direct assault on human values through systematic massacres, forced displacements, mass rapes and the plundering and destruction of homes, wells, crops, livestock and assets meant to sustain life. I know how these horrific acts destroy lives and livelihoods. But these most heinous crimes, genocide and mass atrocities, also threaten U.S. national interests, and we must be better prepared to prevent them.

"In Rwanda today significant problems persist, but with assistance from the U.S. and other international donors, the country has worked hard to recover from one of the most brutal massacres of modern times. While vigilance is required to prevent repetition of the past violence in Rwanda, neighboring Congo, a huge country where the Rwandan genocide sparked successive wars involving seven neighboring countries and resulting in an estimated 5.4 million deaths in the last ten years, needs worldwide attention to help end the reoccurring violence.

"Evidence of the spillover effects of the Rwanda genocide were nowhere more apparent than in the displaced persons camps just outside of Goma in the eastern part of the Democratic Republic of the Congo where Jean Paul lives—camps that the U.S. and other international donors have been supporting since 1994. While aid to Rwanda and Congo supports many important reconciliation and emergency relief projects, early preventive action would surely have been less expensive and could have saved hundreds of thousands of lives.

"There's a pattern. We know from past examples that genocide and mass atrocities in one country fuel threats in other weak and corrupt states, and can prompt the type of long term conflicts that know no boundaries. In Rwanda, with refugee flows spreading to Congo and beyond, the international community, including the U.S. was called on to absorb and assist displaced people, provide support for a massive and ongoing humanitarian relief effort. The longer we wait the more exorbitant the price tag. In Bosnia alone, the U.S. invested an estimated $15 billion to support peacekeeping forces in the years since we belatedly intervened to stop the atrocities.

"What's needed in these cases is early, high-level attention, facilitated by standing institutional mechanisms within our own government, and then strong international partnerships that can form the basis for effective and coordinated action. We need a comprehensive prevention approach that begins with early warning mechanisms, and involves early action to address high-risk situations, timely diplomatic responses to emerging crises, and greater preparedness to employ military options when those are required.

"The genocide prevention report clearly lays out a way forward, starting with the recommendation to create an interagency Atrocity Prevention Committee to analyze threats of genocide and mass atrocities and that warning of these threatened acts be an automatic trigger of policy review. Moreover, the report calls of an investment of $250 million—less than a dollar for every American each year—in new funds for crisis prevention and response.

"We know that the long-lasting consequences of genocide and mass atrocities are enormous. Reconciliation after the fact is possible and essential, but if we shift our focus to prevention rather than response, lives and livelihoods will be saved and threats to our national interest will be mitigated. But, as the Genocide Task Force report emphasizes, for it to work, leadership is the indispensable ingredient. Leadership from the president, Congress, and the American people—nothing is more central to preventing genocide and mass atrocities. Time is not on the side of Jean Paul. We owe it to him and the millions like him, to make genocide prevention a priority, now."