Can Obama keep Sudan from exploding after its referendum? 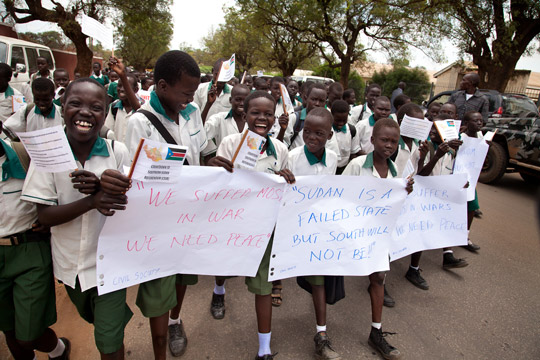 In The Washington Post, Mike Abramowitz, Director of the Museum's genocide prevention program, writes about international efforts to prevent violence in Sudan around the January 9th referendum -- and our ability to respond if those efforts fail. The Washington Post also profiles a video by Pulitzer Prize-winning photographer Lucian Perkins, who recently traveled to South Sudan with Abramowitz on a Museum-sponsored bearing witness trip.

The Washington Post
"Can Obama keep Sudan from exploding after its referendum?"
Thursday, December 30, 2010

Looking back on his presidency, Bill Clinton has often expressed regret over his administration's failure to stop the genocide that ravaged Rwanda in 1994 and cost 800,000 lives, even referring to it as a "personal failure" on his part. And President George W. Bush, who labeled the mass killings in Darfur in 2004 as "genocide," has voiced frustration over his inability to persuade the United Nations and others to intervene more forcefully.

Now President Obama is trying to avoid having to issue his own mea culpa.

Obama's test comes in Sudan, which on Jan. 9 is supposed to hold a referendum on whether the country's southern region will secede from the north. If the south votes for independence - as it is expected to do after decades of marginalization and a north-south civil war - deadly violence could easily erupt. The government in Khartoum has proved willing to brutalize its citizens (in the Darfur region and elsewhere) to remain in power and achieve its aims, and secession would bring to the fore unresolved tensions over Sudan's oil wealth and where to draw the new borders.

This time, the United States seems to have finally learned its lesson. In recent months, the Obama White House has convened multiple meetings of top advisers to discuss Sudan, sent a special envoy to the region more than 20 times and offered Khartoum a package of carrots and sticks aimed at avoiding the worst violence. While the administration won't deal directly with Sudanese President Omar Hassan al-Bashir, who has been indicted for war crimes committed in Darfur, U.S. officials have enlisted Egyptian President Hosni Mubarak and Sudan's neighbors to send a strong message that the referendum must be held peacefully and on time.

"This is the first time I have seen the U.S. government devote so many high-level resources to preventing violence before it happens rather than responding to it after the fact," Samantha Power told me in an interview. Power - whose 2002 book, "A Problem From Hell," chronicled the world's failure to deal with 20th-century genocides and mass slaughters from Armenia and the Holocaust to Rwanda and Bosnia - is now an adviser to Obama.

But these efforts and resources may not be enough. Yes, the world is watching: In addition to Washington's diplomatic push, the African Union is trying to broker peace, European nations are sending economic assistance, and 10,000 U.N. peacekeepers are in southern Sudan monitoring the situation. But the sad reality is that even an actively engaged international community may be unable to head off mass violence in the months or years ahead.

A coup in Khartoum, a cattle raid in the south that escalates into tribal violence, a rogue militia commander deciding to start a new conflict in a fragile border region - there is virtually no limit to the plausible scenarios that could lead to renewed fighting in Sudan. Ethnic and economic tensions, the willingness of political leaders to manipulate them and the easy availability of weapons will continue to make the country vulnerable to violence, even genocide.

If the referendum is not held on time or is tampered with by the north, "there is a huge potential for war," former guerrilla soldier Acuil Malith Banggol told me during my recent trip to the south. "Both parties are arming themselves, and there will be more destruction. . . . There is no way southern Sudan is going to accept being humiliated and subject to slavery, racial discrimination and religious discrimination."

Preventing such violence through diplomacy, as the Obama administration is attempting, is obviously preferable to dealing with it later - but the options may be limited. Diplomacy can be effective only if it is complemented by willingness to take action if prevention fails. And here, the legacy of places such as Rwanda and Bosnia yields a dispiriting conclusion: It is hard to have confidence that the world would be willing or able to intervene to stop a mass slaughter in Sudan, especially in the months after the referendum, when international attention will inevitably fade.

It is far from clear that the U.N. Security Council would react quickly to an unfolding crisis, and most experts agree that the U.N. troops in Sudan would be of little use should atrocities commence. (Years of conferences, NATO and E.U. deliberations, and think-tank studies on civilian protection have yet to yield momentum for an effective international rapid-deployment force to deal with such emergencies.) The United States has the capacity to intervene militarily in Sudan, but after 10 years of war in Afghanistan and Iraq, would it have the will, and would it be effective?

If the unthinkable were to happen in Sudan this year, we might hear echoes of Romeo Dallaire, the Canadian general in charge of peacekeeping forces in Rwanda in 1994, who futilely begged the United Nations for more troops to end the slaughter there - and who has lived in anguished regret over his failure ever since.

In many respects, southern Sudan should offer an easy test case for the international community. The potential for crisis has been slow-burning, with the January referendum date long looming as a possible trigger for violence, so the world's political and military leaders have had the luxury of giving serious planning and thought to how to avoid calamity. Two successive U.S. administrations of both parties, along with political leaders from Africa and elsewhere, have worked hard, if not always effectively, to keep the peace process on track. And everyone involved in the diplomatic efforts is keenly aware of the recent failures to prevent massive killing in Darfur, where an ongoing conflict has kept more than 2 million people living perilously in displacement camps.

The Obama administration is populated with senior officials - Vice President Biden, U.N. Ambassador Susan Rice and Secretary of State Hillary Rodham Clinton come to mind - who understand the consequences of past inaction. Although it took some time to reach this point, the administration is now focused on preventing the worst. U.S. officials have been considering humanitarian contingencies for months, and the White House has appointed a director of war crimes and atrocities whose full-time job is to nudge the bureaucracy to address crises such as Sudan.

As the referendum approaches, there are reasons to hope that the worst violence might be averted. Northern Sudan's political leaders are publicly suggesting that they could live, albeit grudgingly, with an independent southern Sudan. U.N. officials are reporting relative calm in the border regions where violence might first emerge. Authorities in both north and south seem committed to resolving their differences politically and understand that renewed war - after six years of uneasy peace - would be disastrous for their economies and security. They also know that fresh fighting would jeopardize the oil revenue on which both sides depend.

But the situation remains extremely dangerous. As India, Bangladesh and the former Yugoslavia attest, the partition or breakup of states has often been extremely bloody for civilians. In my conversations with dozens of people in the south, genuine hope for the future was mixed with a sober understanding of the risks ahead: After all, almost everyone endured terrible hardship during the civil war - the loss of a parent or child, slavery, or a massacre in their village.

And they are hardly sure that they can count on the world to keep history from repeating itself. As they see it, the depredations that took place in southern Sudan, long before Darfur became a household name in the West, received scant attention from other governments and peoples.

Goi Jooyui Yol, a political commissioner in Akobo County in the south, keenly remembers the silence of the international community when the massive violence engulfed his country in the 1980s and 1990s, taking more than 2 million lives and displacing an additional 4 million people. The violence was "very intense," he told me. "Before the world knew, many people were killed."

Next time, ignorance won't be an excuse.