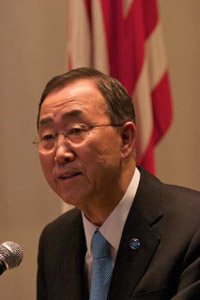 Afterwards he said, “Seventy years ago, six million people were murdered at the instigation of a state. This museum commemorates that appalling truth. It calls upon us to remember — and to act.”

Coming to the Museum directly from meeting with President Barack Obama, the Secretary-General addressed the current situation in Libya, “In Libya, a regime that has lost all legitimacy has declared war on its people. It is up to us, the community of nations, to stand against this crime.”

The Secretary-General also made a written pledge while touring the From Memory to Action installation, adding his voice to nearly 100,000 Museum visitors who have made similar pledges to confront genocide. "Never again" is a clarion call to moral action,” Ban wrote. “It is for all people in all places in all times. Let us write a new history for humankind.”

“The Museum is encouraged by the emerging global consensus, forged after the failures to prevent genocide in Rwanda, Bosnia-Herzegovina, and Sudan, that the international community can and must take action when civilians are threatened with mass atrocities by their own government,” said Mike Abramowitz, Director of the Committee on Conscience, the Museum’s genocide prevention program.

Part of the original vision for the institution, the Museum’s genocide prevention program actively monitors and raises awareness about places at risk of genocide. It co-sponsored the Genocide Prevention Task Force, whose 2008 report marked the first systematic analysis of the U.S. government’s capacity to prevent and respond to threats of genocide, and offered concrete recommendations for improving these systems. The Museum has focused on specific threats in Sudan, Democratic Republic of Congo, Burundi, and Chechnya, Russia, as well as the legacies of genocide in Rwanda and Bosnia-Herzegovina.

A living memorial to the Holocaust, the United States Holocaust Memorial Museum inspires citizens and leaders worldwide to confront hatred, prevent genocide, and promote human dignity. Federal support guarantees the Museum’s permanent place on the National Mall, and its far-reaching educational programs and global impact are made possible by generous donors. For more information, visit www.ushmm.org.

View photographs from the event.