Human rights groups and the United Nations have been warning that Burundi’s elections in 2015 could spark a genocide, but the Early Warning Project’s risk assessments so far indicate that Burundi is not at especially high risk of state-led mass killing. To explore this discrepancy, I asked a handful of experts for their views on this case. While all of the sources I interviewed agreed that the UN was right to be concerned, they disagreed on how severe the risk is and how a new episode of state-led mass killing might come about.

On November 10, 2014, the UN Secretary-General’s Special Adviser for the Prevention of Genocide, Adama Dieng warned that elections upcoming in Burundi in 2015 could devolve into a situation similar to the Rwandan genocide. After meeting with Burundian politicians and civil society leader, Dieng warned that “the worst could happen” if political tensions are allowed to escalate. Human rights groups have also been warning about the 2015 elections since early this year, with Human Rights Watch similarly evoking the comparison to Rwanda.

Given Burundi’s recent history—over a decade of civil war that only ended in 2004 and resulted in the mass killing of over 300,000 civilians—it seems prudent to worry about what the elections will bring.

That said, the Early Warning Project’s annual statistical risk assessment ranks Burundi 49th of 162 countries worldwide for its risk of an onset of state-led mass killing, alongside countries like Mauritania and Jordan. In the same vein, our Expert Opinion Pool currently has two questions running on Burundi, and in neither case is the estimated risk exceptionally high (see the charts below). Although both of those questions ask about 2014, they do suggest that our experts may not be as alarmed as the UN and some NGOs. 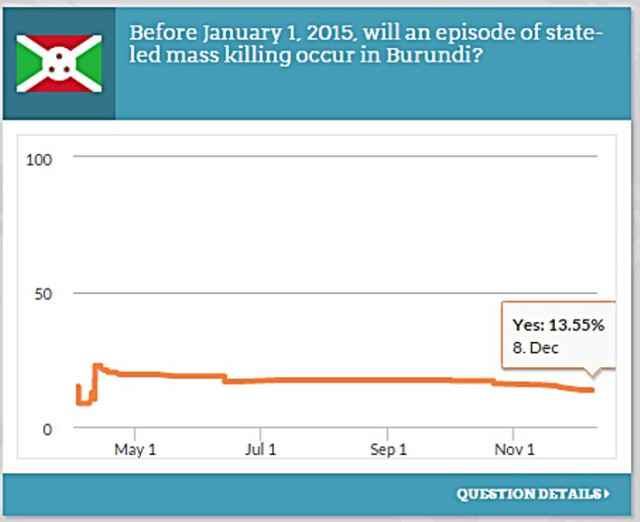 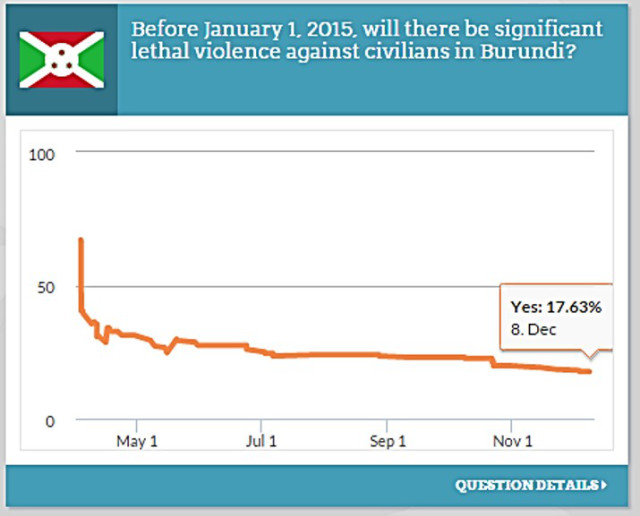 To better understand why our risk assessments might diverge from the intense concern expressed by Special Advisor Dieng and others, I asked a few subject-matter experts and long-time country observers for their views on what the next year might bring in Burundi. Evan Cinq-Mars, from the Global Centre for the Responsibility to Protect, suggested that the risk of mass atrocities would ramp up as the 2015 elections approach. The elections, slated for June with a runoff in July, are expected to feature a candidate from the current ruling party, National Council for the Defence of Democracy (CNDD-FDD), with potential opposition from the National Liberation Front (FNL) and the Union for National Progress (Union for National Progress). Cinq-Mars said that the CNDD-FDD candidate may end up being current President Pierre Nkurunziza who, despite term limits, would run again on a technicality.  If Nkurunziza does run, “The warning signs are right there; there is a clear lack of political space for the opposition and the government has a strong handle on the ability of opposition groups to even operate” he said.

Another expert with deep knowledge of Burundi’s political history, who wished not to be identified pending future travel to the country, took a different view: “While CNDD-FDD certainly has the capacity to carry out a mass killing to eliminate opposition, there really is not a strong challenger to begin with so they would not have a strategic reason for a mass killing.” In a way, the expert suggested, Nkurunziza’s limiting of political space for opposition, while problematic, might also inhibit the development of the kind of serious challenges to the regime that could spark mass atrocities.

The latter view is consistent with our statistical risk assessments. Those assessments are based on a multi-model ensemble, meaning that we combine forecasts from a few different models (and thus their underlying theories) to produce a single best assessment. For Burundi, the model and underlying theory driving Burundi’s risk is what we call “Bad Regime,” which holds that governments with certain attributes are more likely to commit mass killings, especially in countries with a history of mass killing and a higher risk of political instability. If we were to assess Burundi based solely on its forecast from the “Bad Regime” model, it would rank in the top 30 worldwide. Another model in that ensemble, one we call “Elite Threat,” assumes that ruling elites are more likely commit mass killing when their power is threatened by coup attempts or insurgencies. If we were only considering the Elite Threat model for Burundi, it would rank outside the 50 countries most at risk.

Whatever the actual level of risk right now, there were two related scenarios that experts agreed could lead to a state-led mass killing in Burundi in the near future. The first scenario, in keeping with the Elite Threat model, suggests that further mobilization of the opposition, and the emergence of a clear and strong leader, might increase the risk of a state-led mass killing. One way this might happen is through popular protests inspired, in part, by the situation in Burkina Faso as outlined in a recent report in Africa Review.

Along these lines, Cinq-Mars said that the risk of mass killing would increase significantly if political conflict manifests as ethnic and religious conflict.

The second potential scenario is partisan conflict from within the ranks of CNDD-FDD. Charles Brown, who was until recently the Senior Advisor for Atrocity Prevention and Response at the U.S. Department of Defense, said:

A lot of observers are looking at the current situation through the prism of Burundi's terrible history of ethnic violence, civil war, and genocide.  But I don't think that is what people should be worrying about. If Nkurunziza seeks a third term, his most vocal opponents will be other Hutus. Political violence, not ethnic violence, is the real risk.

The expert who asked to remain anonymous agreed, saying:

CNDD-FDD itself does not have a good grip on its future; there is a lot of internal fracturing and if there was violence it would be a type of shadow group of extremists within CNDD-FDD, they were particularly brutal during the war, and have it in their head that they can win by force and that challenges to their power should be put down with force.

Yet, in terms of risk of a military coup, the expert said a “potential bright spot in all of this is the military. It’s a very integrated force that sits out on election day; their job is to maintain order and they’re pretty good at it.”

Finally, experts did agree that the run up to the election might see an increase in violence aimed at keeping opposition away from the polls. “What I am concerned about is low-levels of violence that will be white-washed as “banditry” aimed at intimidating the opposition,” the expert who asked to be anonymous said. “The likely scenario is CNDD-FDD feels like their support is waning so they will commit extra-judicial, but small-scale, violence to get people to vote for them, or stay home.”

In light of Burundi’s history of conflict and mass killing, Cinq-Mars called the 2015 election one of the defining elections in Africa and a measure of Burundi’s ability to solidify its democracy after 20 years of war. And where our risk assessments and experts see a low risk of mass killing, it is likely that NGOs and the UN will continue to warn of the potential for genocide given the seriousness of this type of event.

PREVIOUS POST: Beyond the Canon: New UN Tool Suggests Broader Base for Thinking about Atrocity Prevention

NEXT POST: Madina’s Dream: Life and Death in the Nuba Mountains