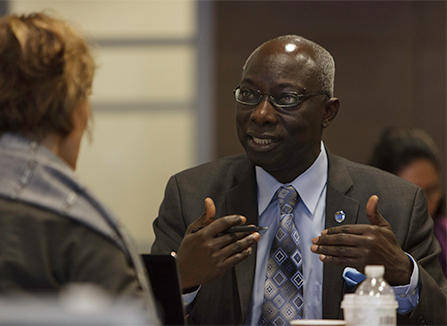 In February 2014, the Center for the Prevention of Genocide convened a diverse and dynamic group of three dozen international experts from the fields of government, technology, business, civil society, journalism, and academia to address two basic questions:

The seminar built upon the findings of the 2009 Sudikoff Seminar, “Speech, Power, Violence,” which identified the need to more clearly define the types of hate speech associated with collective violence and the potential for using this understanding to predict and prevent future genocides.

The Executive Summary (PDF) outlines key findings from the seminar.

Genocide is often preceded and accompanied by widespread hate speech. The leaders who planned mass killings in the Holocaust, Rwanda, and Srebrenica disseminated ideologies of hatred to spur their followers to act, cow bystanders into passivity, and justify their crimes.

It is becoming increasingly clear that certain types of hate speech can serve as both a warning sign and a catalyst of genocide and mass atrocities. Understanding how speech acquires the power to incite group-­targeted mass violence, identifying where and when such inflammatory speech is occurring, and developing ways to counter such speech can all help to prevent these crimes.

For two decades, discussion of how to combat incitement to genocide has centered on criminalization and punishment. This approach has had a limited deterrent effect, and in some states incitement laws have been misused to silence dissent. Suppressing free speech carries its own risk for group-­targeted mass violence, for messages of hate have greatest impact where they lack competition.

Recently, experts addressing hate speech and incitement to mass violence have made significant progress in developing new approaches that go beyond criminal law. Scholars and civil society have:

With these milestones in hand, seminar participants sought to move from a discussion about types of policy responses to refining and expanding a toolkit of specific and practical policies and approaches that can combat incitement to genocide while also preserving the right to free expression.

They also reviewed and assessed the latest efforts to monitor and counter dangerous speech, analyzed specific situations in which dangerous speech is potentially occurring, and identified needs for future research and projects.

This seminar was made possible by the generous support of the Sudikoff Family Foundation, which funds the Museum’s Sudikoff Annual Interdisciplinary Seminar on Genocide Prevention.