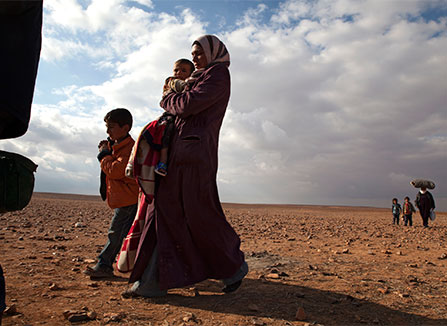 February 12–19, 2014
By Mike Abramowitz, Director, Center for the Prevention of Genocide

The Museum has been deeply concerned for some time over the shocking violence in Syria, the evidence of crimes against humanity, the risk of genocidal acts, and the displacement of some 9 million Syrians from their homes—a disaster that is causing a nation to implode while threatening to destabilize neighboring countries.

Simply put, Syria represents the gravest humanitarian catastrophe the world has faced since the Darfur crisis a decade ago and the Rwandan and Balkan tragedies two decades ago. It is a direct challenge to everyone committed to building a world without genocide and to confronting massive state-directed violence against innocent civilians.

Syria represents the gravest humanitarian catastrophe the world has faced in decades.

Though the Museum has been monitoring the situation since the beginning of the civil war three years ago and issued periodic statements and a report last year on the sectarian turn in the war, the staff of the Center for the Prevention of Genocide felt it imperative that we get a closer look at the situation in order to better inform our activities and outreach.

To that end, the Museum recently sent a delegation to Jordan, which is on the front lines of the crisis, having opened its borders to close to 600,000 refugees—mainly Sunni—fleeing the conflict and chaos inside Syria. The delegation included myself; Michael Gerson, a former member of the Museum’s Council and a Washington Post columnist whose writings about the trip can be found here (external link) and here (external link).

The delegation’s visit was facilitated by the United Nations High Commissioner for Refugees, which is responsible for handling the refugee crisis. We also received assistance from the Jordanian government and the US State Department. During four days on the ground, we spoke with Jordanian officials, the US ambassador, and numerous humanitarian groups involved in the massive international response to the crisis, which has been largely effective in stabilizing the situation in Jordan and other host countries.

Most important, we met with refugees in apartments in Amman, visited the Zaatari refugee camp (home to about 100,000 Syrians), and traveled to the eastern part of Jordan’s border with Syria, where we had the opportunity to talk directly with Sunni refugee families fleeing cities in the middle of the conflict like Homs, Aleppo, Dara’a, and suburbs of Damascus. Their stories left us in little doubt that targeting and eliminating civilians in Sunni neighborhoods perceived as strategically important to the Assad regime is an unstated goal of the government’s military strategy.

Next: The Refugees’ Plight