The Rwandan Refugee Crisis: Before the Genocide: Part I

In commemoration of the 20th anniversary of the Rwandan genocide, the Museum’s Simon-Skjodt Center for the Prevention of Genocide and the National Security Archive launched the first phase of a multiyear initiative titled Failure to Prevent: International Decision Making in the Age of Genocide. The first phase includes a series of “electronic briefing books” that provide in-depth background to pivotal events before and during the Rwandan genocide when international action could have made a difference. This is the fourth briefing book in the series.

In the months leading up to the genocide in Rwanda, UN officials and western diplomats grew increasingly concerned about the threat to political stability posed by millions of refugees and internally displaced persons in the Great Lakes region. Attempts by the international community to address this refugee crisis became enmeshed in political infighting inside the country.

The documents posted here show the refugee crisis was compounded by a lack of reliable intelligence and a shortage of military personnel and international monitors. An ambitious refugee resettlement program negotiated as part of the Arusha Accords by the Hutu-led government of Rwandan President Juvénal Habyarimana and the Tutsi-led Rwandan Patriotic Front (RPF) was never actually implemented. 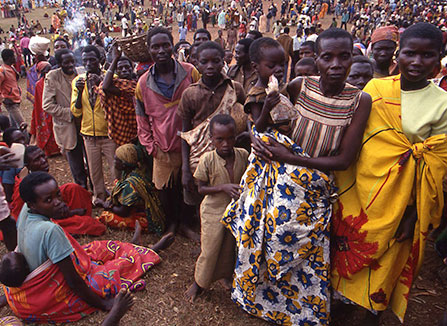 The documents are drawn from the records of the UN peacekeeping force in Rwanda, known as UNAMIR, and US State Department records released in response to Freedom of Information Act requests submitted by the National Security Archive.

A State Department fact sheet issued in March 1994 on the eve of the genocide summarizes three overlapping refugee crises in Rwanda and neighboring Burundi:

Each of these three groups had its own distinct grievances and aspirations, dating back many decades. The Tutsi diaspora served as a natural recruiting ground for the RPF. According to a former US diplomat in Kigali, Joyce Leader, Hutu refugees from Burundi were “radicalized” by their experiences and were “potential recruits” for the Interahamwe militia groups who were responsible for some of the worst episodes of the genocide in Rwanda.

The documents posted here show that international officials devoted considerable diplomatic attention to the refugee problem in Rwanda. The Rwandan government and the RPF signed a protocol settling refugee issues in June 1993 as part of the Arusha negotiations. Instead of implementing the agreement, UN peacekeepers were overwhelmed by a fresh wave of refugees from Burundi following the October 1993 assassination of that country’s president, Melchior Ndadaye.

The documents suggest that UN officials were wary of providing assistance to Tutsi refugees and internally displaced persons in northern Rwanda for fear of creating a “pull factor” that would result in even larger numbers of refugees.

Next: Documents 1–8: Summaries and Links