As Côte d’Ivoire’s 2020 presidential elections near, the country is at risk for large-scale violence against civilians. Though atrocity crimes are not today taking place in Côte d’Ivoire, early warning signs are visible and warrant attention.

“Election Uncertainty: Preventing Atrocity Crimes in Côte d’Ivoire” (available in English and French), explains the factors behind three high-risk scenarios, identifies potential triggering events that could lead to violence against civilians in the next 12-18 months, and proposes recommendations for how to mitigate the risk.

This report is one of the components of the Early Warning Project, which includes both quantitative and qualitative assessments of atrocity risk. It is the fourth in a series of deep-dive qualitative assessments designed to assist policymakers, NGOs, and members of civil society in understanding the atrocity dynamics particular to the country in question and recommending preventative actions.

As Côte d’Ivoire’s 2020 presidential elections near, the country is at a crossroads: It can continue an era of relative peace or revert to the type of ethnic-delineated violence that has marred its past. Every political transition in the country’s history has resulted in violence against civilians. Most recently, the crisis that erupted as political parties disputed presidential election results in 2010–11 led to systematic civilian targeting by both sides—that of current President Alassane Ouattara and former President Laurent Gbagbo—including the alleged commission of atrocity crimes by Gbagbo and his followers. Although atrocity crimes—large-scale, systematic violence against civilian populations—are not yet taking place in Côte d’Ivoire, early warning signs are apparent. Immediate attention and early action by the Ivorian government and international partners are required to mitigate risks, prevent violence, and help save lives. To this end, at the end of this report we offer detailed recommendations to the government of Côte d’Ivoire, political party leaders, civil society, foreign governments and international organizations, and the media.

Our analysis suggests that in the period before, during, and after the election, clashes between the main political parties may lead to violence and mass atrocity crimes. In past high-stakes elections, members of political parties have demonstrated the willingness to use violence. Risk is heightened during this period in part because of the zero-sum nature of Ivorian politics; politicians and their supporters perceive the 2020 elections to be “winner-take-all” for political and economic control of the country. In the past, this attitude has led political leaders to manipulate ethnic identity and economic grievances, dividing communities and inciting violence to solidify allegiances and generate political support. Today there is a risk of the resurgence of such exclusionary ideology. 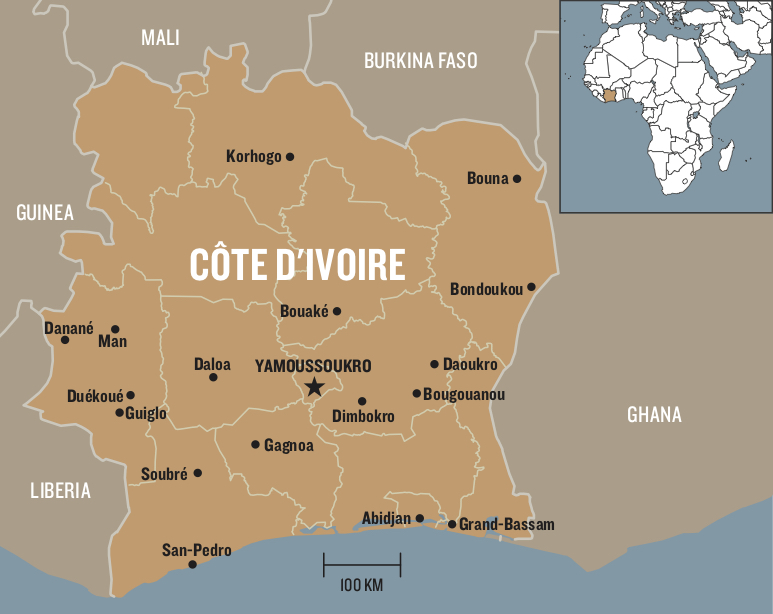 Four major structural factors underpin risk for atrocity crimes in Côte d’Ivoire. First, Côte d’Ivoire has experienced two civil wars in the past 20 years, both of which involved deliberate violence against civilians and intentional ethnic targeting. Second, political affiliation is defined along ethnic and regional lines, making electoral competition a fight for group dominance. Although political parties are not homogenous—Côte d’Ivoire comprises people from more than 60 ethnicities speaking over 80 languages—a person’s identity tends to determine his or her party affiliation. Past exclusionary ideology discriminated against northerners and risks a resurgence; at the same time a new exclusionary ideology, discriminating against non-northerners, is being developed. Third, disputes over land ownership and access between Ivorians of different ethnicities and between Ivorians and foreigners are a pervasive source of conflict that can be harnessed by politicians to generate support. Fourth, socioeconomic inequalities and regional disparities feed the narrative that some groups of Ivorians have unfair advantages, or even that some groups are a threat to others.

In the context of these structural issues, five factors have precipitated the escalation of risk today: (1) the breakup of former political alliances, (2) partisan divisions within the armed forces, (3) the political opposition parties’ perception of abuse of power by the ruling party, (4) widespread access to arms, and (5) dangerous speech in political and public discourse.

According to our analysis, potential triggering events in the next one to two years may occur before, during, or after the elections, which are scheduled for fall 2020. Potential flashpoints include the designation of the members of the Independent Electoral Commission (IEC), a perception of high-profile partisan targeting for judicial prosecution, the potential mishandling of former President Gbagbo’s return from custody at the International Criminal Court in The Hague, and the announcement of election results.

In all scenarios, we assess that violence would not start at the party leadership level and would not—initially, at least—be condoned publicly by leaders, who are all interested in being seen by Ivorians and the international community as peacemakers. Rather, any violence would start with demonstrations, which could escalate to become riots, thereby bringing in political party–affiliated youth groups (which may have access to arms), communal militias, private security companies, groups of ex-combatants, and the army. Around the country, local grievances, such as those concerning land conflict, could feed the fire. People may use a period of political unrest, fueled by hate speech and fear-mongering spread by political leaders, to settle personal scores, thus expanding the reach of the conflict by calling on ethnic solidarity within and across regions as justification for taking up arms.

Writing in summer 2019, several factors remain uncertain, limiting our ability to describe plausible atrocity crime scenarios in detail. In particular, until the major fault lines in the presidential elections become clearer, it is difficult to anticipate the most likely perpetrator and target groups. This uncertainty should not, however, be taken as a reason to discount the risks for atrocity crimes. We identify three pairs of potential conflicting parties, which could shift as parties declare their candidates, the IEC does or does not reform, and former President Gbagbo clarifies his position and intentions regarding the election.

This page is also available in: Français

This page was last updated in October 2019.