What Do Americans Think About Preventing Genocide? 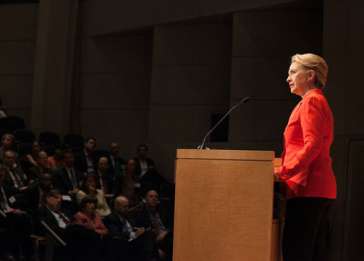 Secretary of State Hillary Clinton delivers the keynote address at a Museum symposium on ending genocide. —US Holocaust Memorial Museum

Two thirds of Americans believe that genocide is preventable, and almost 70 percent think the United States should act to prevent or stop genocide and mass atrocities in other parts of the world, according to a new poll commissioned by the United States Holocaust Memorial Museum.

These poll results were unveiled today in Washington D.C. at a symposium on ending genocide in the 21st century addressed by Secretary of State Hillary Rodham Clinton, other senior government officials, experts on mass atrocities, and leading journalists. In her keynote address, Clinton said the United States and other governments had a responsibility to act to prevent genocide “before the match is struck” even though the course of action is not always clear.

“The questions of when and how to act are difficult,” Clinton told the gathering, organized by the Museum in cooperation with the Council on Foreign Relations and CNN. “There is no one-size-fits-all solution. Every situation requires a tailored and careful response.”

Clinton said that the Obama administration considered genocide prevention “a core national security interest” and moral responsibility, but this was “not code for military action.” She said that “force must remain a last resort” and listed a series of other, usually more appropriate foreign policy tools, including “diplomacy, financial sanctions, humanitarian assistance, [and] law enforcement measures.”

The poll on American attitudes towards genocide was conducted by the polling firm Penn Schoen Berland on the basis of a telephone survey of more than 1,000 Americans between June 30 and July 10, 2012. According to pollster Mark Penn it showed that 78 percent of Americans support U.S. military action to stop genocide, particularly if carried out in cooperation with other governments. Fifty-five percent are in favor of some kind of military action in Syria, where more than 10,000 people have been killed in an anti-government uprising over the last year.

“Americans believe that genocide is preventable,” Penn told the meeting. He said that the political and moral calculus for intervention to prevent genocide was changing “in an Internet society where everything can be captured on a cell phone.”

The poll suggested that six out of ten Americans approved military action to stop mass atrocities in Bosnia and Libya, and would have approved similar action in Rwanda and Darfur.

Several speakers, including Secretary Clinton, called for the development of a long-term genocide prevention strategy, noting that it is difficult, if not impossible, to halt mass atrocities once they have already begun. The chairman of the National Intelligence Council, Christopher Kojm, said his analysts were working on the first-ever National Intelligence Estimate (NIE) to identify factors that play a role in mass violence, including scarce natural resources, economic crises, and rapidly changing technology.

Kojm said modern technology was proving to be a double-edged sword, providing ordinary citizens with the means of rapidly disseminating news about mass atrocities but also enabling governments to identify, detain, and otherwise harass dissidents. Modern information technology gives authoritarian governments “an unprecedented ability to monitor their own citizens,” he noted. “How this plays out will be one of the main topics we will be discussing in the NIE.”

Clinton took a more upbeat view of the impact of the new technology, saying it was changing the way the United States was detecting and responding to mass atrocities. She said the State Department was working on a project to detect the use of malicious software by foreign governments to target protestors “and then warn those being targeted.”

This post was contributed by Museum fellow Michael Dobbs.