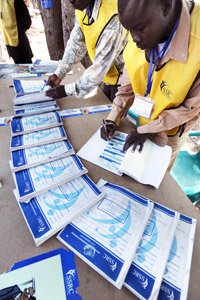 This past weekend, referendum voting on the future of Southern Sudan came to a peaceful and orderly close. Although final results are not expected until mid-February, early returns suggest overwhelming support for independence.

Before the two nations could potentially – and officially – split in six months, many key issues remain unresolved, the most challenging of which may be determining the status of Abyei, where violence flared at the outset of the referendum. Future peace between North and South Sudan will likely hang on their ability to settle questions of citizenship and land rights in Abyei and a commitment from both to stop manipulating the border region’s ethnic diversity. A new report by the Rift Valley Institute stresses the importance of recognizing the root causes of violence in Abyei and the establishment of separate mechanisms to address the grievances of Abyei’s residents. “Abyei has so far proved to be the most difficult part of the Comprehensive Peace Agreement (CPA) to implement, more difficult even than the determination of the rest of the North-South boundary or the division of oil revenues,” the report explains.

Abyei has not been the only region of Sudan left behind in the intense preparation for Southern Sudan’s referendum. The CPA also prescribed opportunities for the people of Southern Kordofan and Blue Nile states in the North to express their voices in “popular consultations.” However, these ill-defined processes do not permit the possibility for self-determination, a dream especially for the people of Nuba Mountains, who suffered decades of famine, slavery, and forced relocation at the hands of the Northern government. The concern now is that the possibility of southern independence – and greater stranglehold by Khartoum in the North – may inflame frustrations in the Nuba Mountains region.

In January, the UN released data that identified 2,321 violent deaths last year in Darfur, where the Sudanese government has been tightening its grip over the beleaguered population. In remarks to the UN Security Council, U.S. Secretary of State Hillary Clinton expressed concern and condemnation at “alarming reports that Sudanese Armed Forces have burned homes and blocked civilians’ access to UNAMID [United Nations/African Union Hybrid Operation in Darfur] in Khor Abeche, and that the Government of Sudan violated the North/South ceasefire with repeated aerial bombardments into the Kiir River Valley – in addition to the all-too-frequent reports of aerial bombardment in Jebel Mara and the Government of Sudan’s ongoing refusal to grant UNAMID patrols access to affected populations…” In December, Tanzanian peacekeepers at Khor Abeche in southern Darfur even gave out their own rations to refugees – in defiance of UN rules – because food supplies had been blocked by Sudanese Armed Forces for nearly a week.