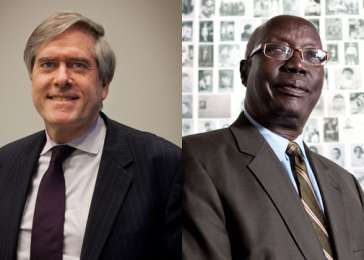 Marking a full year of violent suppression of anti-government protests in Syria, the United Nations Secretary-General's Special Advisers on the Prevention of Genocide, Francis Deng, and on the Responsibility to Protect, Edward Luck, released the following statement on March 15:

"Over the past year, the Syrian Government’s increasingly violent assault of its population has deepened sectarian divides and brought the country to the brink of civil war. Clearly, the Government has manifestly failed to protect the Syrian population. It has resorted to extreme violence, instead of allowing the Syrian people to freely express their opinions and make their voices heard about the fate of their country. In the name of order, it has brought chaos and the destruction of whole neighborhoods in some of the country's major cities.

The lack of unified international condemnation and response to protect the Syrian population has encouraged the Government to continue its course of action. Reports suggest that the Government has intensified its attacks in the face of Security Council paralysis, leading to a sharp increase in the number of deaths, injuries and cases of abuse and torture over recent weeks and months.

The lack of timely and decisive action by the international community has left the Syrian population to fend for itself. As a result, reports suggest that an increasing number of Syrians have taken up arms. A growing number of soldiers have reportedly chosen to defect rather than obey orders to commit crimes against civilians. As attacks by Government forces and allied militias against civilians continue, we fear that the risk of retributive acts along sectarian lines will also increase. To prevent further rounds of violence, which could have devastating effects for the country and the region, the Government must stop its attacks on the people of Syria now.

There is strong and growing evidence that crimes against humanity are being committed in Syria. We reiterate our calls for the Government of Syria to immediately end all violence against its population and for all parties, including non-state actors, to meet their obligations under international law. Violence by any party against civilian populations is unacceptable. We call on the international community, including the Security Council, to take immediate collective action, utilizing the full range of tools available under the United Nations Charter, to protect populations at risk of further atrocity crimes in Syria. The international community must act on the pledge by all Heads of State and Government at the 2005 World Summit to protect populations from genocide, war crimes, ethnic cleansing and crimes against humanity, including their incitement."