Religious Freedom Promotion as a Tool for Atrocity Prevention

From July 24-26, the US Department of State hosted the first-ever Ministerial to Advance International Religious Freedom, welcoming survivors of religious persecution, government delegations, interfaith religious leaders, and civil society representatives from more than 80 countries to Washington. During this high-level event, attendees participated in sessions and side events to discuss challenges to freedom of belief and practice and identify tangible ways to combat religious persecution and discrimination around the globe.

Atrocity prevention was among the topics discussed during the ministerial. Simon-Skjodt Center Deputy Director Naomi Kikoler participated in a panel on preventing genocide and mass atrocities and the Museum hosted two side events—a breakfast and tour for survivors of religious persecution and a closing reception with remarks by US Ambassador to the United Nations, Nikki Haley. The Potomac Plan of Action, the framework for national and multinational activities to combat religious persecution issued by Secretary Pompeo during the ministerial, includes a provision on atrocity prevention. It asserts that “States should use appropriate diplomatic, humanitarian and other necessary means to protect their populations from genocide, war crimes, ethnic cleansing, and crimes against humanity, including when based on religious convictions.” What does atrocity prevention have to do with religious freedom? 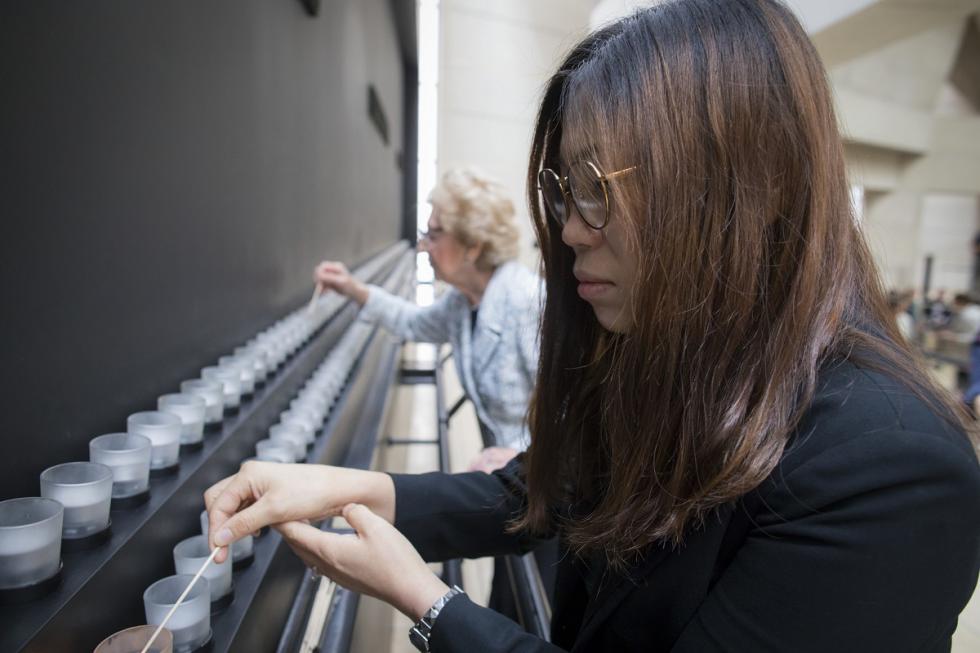 Holocaust survivor and Museum volunteer Irene Weiss and a member of the ministerial delegation light candles in the Hall of Remembrance. —US Holocaust Memorial Museum

According to Article 18 of the Universal Declaration of Human Rights, “everyone has the right to freedom of thought, conscience and religion,” including the right “to manifest his religion or belief in teaching, practice, worship and observance.” Yet many people around the world face discrimination, persecution, and even violence solely on the basis of what they believe. The Holocaust is the most extreme example of religious persecution, yet it did not happen in a vacuum. As horrific as the events of the Holocaust were, they happened in the context of centuries of antisemitism throughout Europe and years of discriminatory laws and practices in Germany in particular. Rhetoric claiming racial inferiority and political conspiracy; laws restricting livelihoods and the benefits of citizenship; violence committed with impunity and/or the tacit support of the state—all were present in Germany during the 1930s and 1940s, as well as in many cases of religious persecution today.

In the case of the Yezidi in Iraq, they were labelled “devil-worshippers” and attacked by intolerant neighbors long before the so-called Islamic State (ISIS) claimed territory in the Middle East. In the Central African Republic, Muslims were called “Chadians” and their political allegiance questioned long before mostly Christian armed groups attacked Muslim civilians in 2013 in retaliation for Seleka violence. In Burma, the military has committed mass atrocities against the Rohingya and other ethnic minority communities with impunity for decades. Officials within Burma's military as well as the civilian-led government have referred to Rohingya—who have been denied citizenship by law since 1982—as “Bengalis” and “terrorists” to justify brutal violence and the systematic expulsion of Rohingya civilians from the country.

A Rohingya man looks through a gate of a mosque in an internment camp outside of Sittwe. —Paula Bronstein Getty Images Reportage for the US Holocaust Memorial Museum

Prior discrimination and large-scale violence are two key indicators that the potential for future mass violence exists. Indeed, religious minority communities often serve as a sort of canary in the coal mine. Their treatment can serve as an indication of the health of the broader society. As Policy Director Kikoler noted, “We know that when religious freedom is denied, when anti-Semitism, extremism, Islamophobia and a myriad of other forms of discrimination against religious communities is allowed to fester—other vulnerable communities also will be at heightened risk and a state’s prosperity and stability undermined.” Given this connection, what can be done to prevent atrocities and respond to religious persecution?

Declare atrocity prevention as being in the national security interest

In addition to the horrific human toll they cause, mass atrocities threaten global security and have decades-long consequences for the entire world. They can lead to long-term regional instability, refugee flows, economic disruptions, and massive humanitarian response efforts that can last for generations. An explicit declaration that atrocity prevention is in the national interest demonstrates the government’s commitment to prioritizing prevention.

Presidents Clinton, George W. Bush, and Obama elevated atrocity prevention by including it in National Security Strategies. President Obama issued an Executive Order on a Comprehensive Approach to Atrocity Prevention and Response in 2016. On July 17, 2018, the House of Representatives passed the bipartisan Elie Wiesel Act with a vote of 406-5, which stated that US policy should consider atrocity prevention in the national interest of the United States.

So often, action is only taken once violence reaches a certain threshold, when there are fewer opportunities for low-cost, low-risk action. In order to be truly preventive, actors must engage prior to the point at which violence is imminent. According to the bipartisan Genocide Prevention Task Force:

The first major element of a comprehensive system to prevent genocide and mass atrocities is a reliable process for assessing risks and generating early warning of potential atrocities...If underlying risks and evolving dynamics can be recognized and described accurately in advance of or at the early stages of a crisis, the full panoply of policy options will be viable.

The existence of an early warning system increases the likelihood that warning signs such as discriminatory laws, hate speech, and group-targeted violence are recognized and the risks properly assessed before atrocities begin. To this end, the Obama administration tasked the intelligence community with putting together a National Intelligence Estimate (NIE) on the risk of global atrocities. The intelligence community also began including atrocity risks in the annual threat assessment submitted to Congress. There has not been a global NIE on mass atrocities since 2013.

Impunity for past violence can signal to perpetrators that such violence is acceptable. By ensuring criminal prosecutions or some form of redress for victims of group-targeted violence, states increase the cost to the perpetrator of committing such crimes. There is an additional benefit to ensuring accountability for past crimes. When legitimate, transparent pathways to justice are available, members of targeted communities are less likely to take justice into their own hands.

At any given time, there are dozens of diplomatic priorities for each bilateral or regional relationship. Other things often take precedence, particularly in the midst of conflict. Maintaining a semblance of stability or good relations with the government, negotiating a political agreement between warring parties, delivering life-saving assistance to civilians with dire humanitarian needs-—civilian protection and prevention of atrocities can often get lost in the fray. The appointment of senior officials is more than just symbolic. It establishes a designated person with the authority to maintain focus, elevate warnings, and spur government action to prevent atrocities. The US government has an Ambassador-at-Large for International Religious Freedom. The European Union and more than 60 countries around the world have Focal Points for the Responsibility to Protect (R2P).

The Potomac Plan of Action outlines six additional actions that states can take to prevent and respond to atrocities: 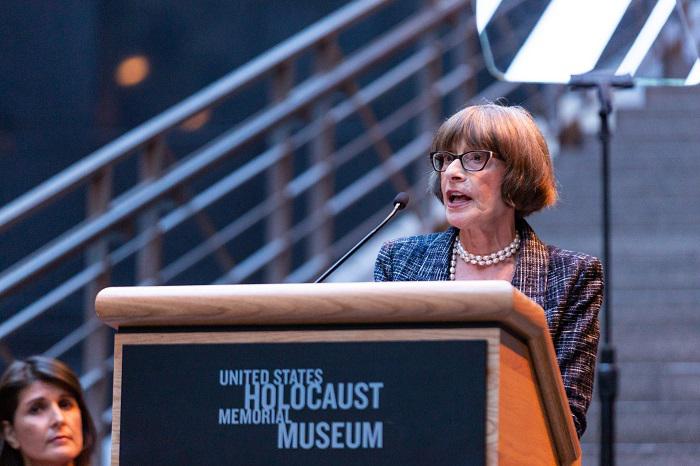 Museum Director Sara J. Bloomfield delivers remarks to the delegation for the Ministerial on International Religious Freedom. —Cheriss May for US Holocaust Memorial Museum

The aforementioned actions are intended for states and multilateral bodies, but individuals also have a responsibility to oppose discrimination and persecution on the basis of religion. Every human being has the power and the authority to denounce hateful rhetoric, call for justice on behalf of survivors of religious persecution and violence, support reconciliation and renewal in affected communities, and hold their leaders accountable for their policies in this regard. In the words of Museum Director Sara Bloomfield, there are always choices:

We know from the Holocaust that the unthinkable is possible. That under certain circumstances, leaders and ordinary people can do the very worst to other people, even neighbors, even children. We also know that there are always choices. Perpetrators count on inaction, but everyone can choose to advance human solidarity.

The international community—from heads of government to the youngest citizen—have a choice to make. We must all decide whether to stay silent or speak up when we hear false narratives designed to vilify a group on the basis of their identity or beliefs. We must decide whether to stay silent or speak up when acts of violence against any group are met with indifference or tacit approval by societies or governments. Whether encountering hate speech in our own communities or reading reports of ethnic cleansing—possibly genocide—in Burma, silence is acquiescence. History has demonstrated time and again that once the persecution of one community is deemed acceptable, the consequences can be dire and the risks can spread beyond that one community.

Visit our case pages to learn more about contemporary cases of mass atrocities.

Watch the ceremony and candle lighting at the Museum with survivors of religious persecution from around the world.

PREVIOUS POST: State of the World: Mass Killing in 2017