Reflections on Rwanda and Cambodia 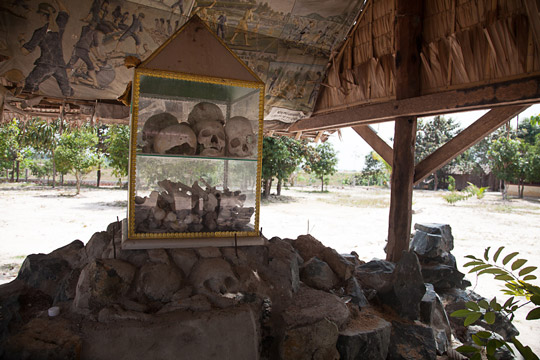 Remains from a mass grave in Cambodia's Kampong Chhnang province are now part of a memorial near the grave site. —Lucian Perkins for US Holocaust Memorial Museum

The piles of bones and faded, tattered clothing that fill the Nyamata Church, about an hour outside of Kigali, Rwanda, tell a vivid narrative, of terrified Tutsis clustering into a Catholic church, believing that its sanctuary would protect them from Hutu militants, as it had once before, but would not again. The skulls piled in the Buddhist memorial at Choeung Ek, in Cambodia, convey a similar sense of horror, as does the muddy trail through the former rice paddies known as the "killing fields." But the Cambodian narrative isn't nearly as clear as Rwanda's.

Determining what, exactly, motivated the mass killings under the Khmer Rouge government, from 1975-1979, and marked certain victims for death is an ongoing source of exploration among global human rights activists. While religion and ethnicity played some part in singling out those who were targeted, particularly among the Muslim minority known as "Cham," they weren't the dominant criteria: Anyone educated and perceived to be in the thrall of Western ways was also a likely victim, even if they shared the same race, ethnicity, religion, or even family background as those who did the killing.

This, of course, has led some observers to suggest that Cambodian massacres, while crimes against humanity, don't amount to a genocide, except perhaps in the targeting of Muslims. Legally, this should be a minor distinction. The horrors felt by those who were separated from society, brutalized, and then killed for their alleged Western ways aren't materially different from those felt by people targeted for their race, religion, ethnicity, or national background. But for scholars seeking to glean a deeper understanding of what drives societies to commit mass slaughters, Cambodia presents a unique challenge. It isn't a typical case of political violence, in which a murderous dictator represses his opponents to keep himself in power, and it isn't an obvious genocide. Not surprisingly, the country itself seems not to know how to process its ongoing feels of grief and loss.

In Rwanda, the 1994 genocide remains a defining event. Almost every policy of the Tutsi-dominated Kagame government is dedicated to preventing another genocide, from its harsh speech laws punishing anyone who preaches "divisionism" or the "genocide ideology;" to its educational, health, and economic policies, which aim to bolster a unified national identity through swift development; to its sometimes brutal foreign policy, dedicated to preventing bands of Hutu extremists from reconstituting in other countries. In Kigali, those convicted of genocide-related crimes are visible in their government-issued jumpsuits, performing public works.

In Cambodia, with its murkier history, the mass killings of the Khmer Rouge are largely a submerged trauma. The government acceded to war-crimes trials, but seems reluctant to permit investigators to bring cases against anyone beyond the highest government officials and most notorious killers. After more than three decades, the wounds remain for families and individuals, but closure seems quite distant. Some people appear to be waiting for justice to be delivered in the afterlife.

Cambodians' indirect responses to their traumas of the 1970s further complicate the task of outsiders seeking to understand the roots of genocide. For every victim willing to step forward and tell his or her horrific story—and there are many, especially among the Cambodians who emigrated to the United States—there are many others suffering in relative silence. And while Rwanda has held village trials where victims can point to those who raped or abused them, or who stood by while others did, Cambodia seems uncertain about how to apportion guilt. The old saw of just-following-orders doesn't carry much weight in Rwanda, where chaos reigned. But in Southeast Asia, with a greater tradition of obedience to authority, there is more reluctance to condemn a guard captain or foot soldier for atrocities committed before their eyes.

This is not to say that there aren't obvious parallels between the killings in Rwanda and Cambodia. The fateful, if accidental, roles played by outside powers stand out. France helped prop up the Hutu-led government that ushered in the Rwandan genocide; the United States' secret bombing of Cambodia during the Vietnam War served to destabilize the country, making it easier for the Khmer Rouge to take power.

And there is, of course, the universality of death symbolized by those skulls. Mass killings may differ in their pathologies, but not in the emotions they evoke, be it for their victims or for outsiders whose only standing is as members of the human race.

Peter S. Canellos is the editorial page editor of The Boston Globe. He traveled to Rwanda in November, 2011, with the International Reporting Project. In October, 2012, he was part of a fact-finding trip to Cambodia organized by the Center for the Prevention of Genocide at the United States Holocaust Memorial Museum.