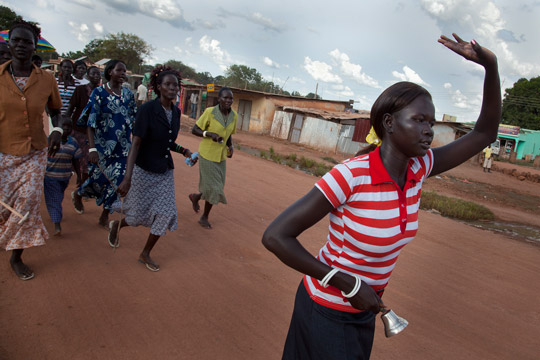 On January 5th, the Museum issued a press release urging leaders in Sudan's North and South to call for calm in advance of South Sudan's referendum.

On Sunday, January 9, 2011, southern Sudan will vote on a referendum for its independence from northern Sudan. A politically historic moment, the vote to partition Sudan could trigger violence, and the danger to civilians will remain following the referendum.

The vote marks the culmination of a peace agreement that ended a devastating 20-year civil war between the North and South, which resulted in the death of at least 2 million people and displaced 4 million others. With a history of group-targeted violence, Sudan has continued to display some of the warning signs of mass atrocities against civilians, including a demonstrated willingness to manipulate ethnic and economic tensions and employ brutal tactics. The referendum is also being held in the shadow of ongoing violence in Darfur.

“After decades of violence and protracted peace negotiations, this opportunity for southern Sudan raises new hopes for the region, as well as new risks,” said Mike Abramowitz, director of the Committee on Conscience, the Museum’s genocide prevention program. “Leaders in both northern and southern Sudan, having committed themselves to allowing the referendum to occur, should now abide by that promise by calling for calm and respecting the results of the vote.”

Until results are announced, a period of uncertainly will likely follow the vote, and, secession, if that is the result, will not officially occur for six months. During this time, sustained international engagement will be necessary to ensure that all parties in both the North and South refrain from violence and work as neighbors toward building stability and peace.

“It is essential for the international community, and particularly the United States, to maintain focus and vigilance not only in these immediate days surrounding the vote, but over the coming months,” Abramowitz continued.

Read the full press release and access more resources about the referendum, including high resolution photographs available for download.