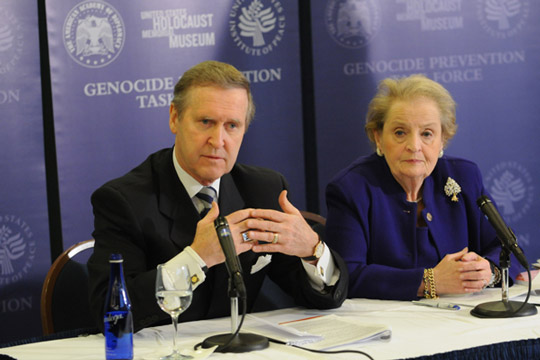 By Madeleine Albright and William Cohen

This article originally appeared on Foreign Policy on April 23, 2012. Madeleine Albright served as U.S. Secretary of State and William Cohen served as U.S. Secretary of Defense. In 2008, they co-chaired a Genocide Prevention Task Force convened by the U.S. Holocaust Memorial Museum, the U.S. Institute of Peace, and the American Academy of Diplomacy.

New presidential initiatives launched during an election year often suffer from the curse of poor timing -- being reduced to a punch line in attack ads or the victim of opposition research. But a critical issue has emerged during this 2012 campaign that should command bipartisan appeal. U.S. President Barack Obama's planned announcement Monday morning at the United States Holocaust Memorial Museum of a new interagency Atrocities Prevention Board (APB) addresses a structural deficit our government has faced for decades across different presidential administrations: What options do we have beyond doing nothing and short of intervening militarily to prevent, deter, and end bloodshed against innocent civilians?

The initiative calls for a group of senior administration officials to meet monthly to develop and implement prevention and response policies that will draw upon the specialized tools and reach of all U.S. government agencies. The options available for strengthening U.S. policy include tightening American immigration regulations to deny human rights abusers' access to the United States and allied nations, expanding domestic judicial mandates to prosecute perpetrators of humanitarian crimes, and the first-ever National Intelligence Estimate on the global risk of mass atrocities. Equally important, the president's announcement elevates the importance and value of saving lives -- putting that lofty objective on more equal footing with other competing foreign-policy priorities.

This initiative should not be viewed as a new doctrine for humanitarian intervention or global adventurism, as some might suggest. Rather, it is a clear-eyed and pragmatic attempt to expand our government's toolbox to meet the challenges posed by tyrants who pose an extraordinary threat to their civilian populations. This toolbox is about more than sending in the Marines -- it is about better intelligence, more focused preventive diplomacy, and the smarter use of coercive pressures that might deter would-be perpetrators from employing mass violence to achieve their political goals.