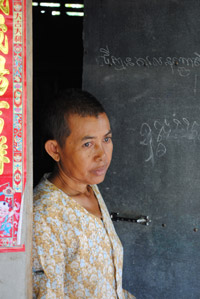 By Michael Abramowitz and and Mark Sarna

A few hours outside of Cambodia’s capital, 58-year-old Taing Kim, a delicate woman who spent several years as a nun, lives in a gray concrete house in the middle of a quiet village amid a sea of rice paddies. She settled in Kampong Chhnang nearly 30 years ago and makes her living by farming and selling firewood. She was married in 1980 but says her husband left her when he learned of her past.

Taing Kim is one of thousands of victims who have filed to be heard in the trial of three of the surviving leaders of the Khmer Rouge, the murderous party in power from 1975 to 1979 that tried to forcibly create an agrarian utopia in Cambodia — and killed some 1.7 million people along the way. Nuon Chea, the No. 2 leader in the Pol Pot regime; Khieu Samphan, the former head of state; and Ieng Sary, who was foreign minister, face charges of crimes against humanity, genocide and war crimes.

When the Extraordinary Chambers in the Courts of Cambodia begin opening statements on Monday, it will mark the first time the international community has held senior leaders of the Khmer Rouge to account for the system of torture, starvation, forced marriage and execution they created for people like Taing Kim. The chambers are a hybrid court of Cambodian and international judges, established by a treaty between the Cambodian government and the United Nations. The trial will constitute one of the most significant international legal cases since 1946, when the Nazi high command was tried at Nuremberg and sentenced in less than a year.

These days, the gears of international justice grind more slowly. Great power rivalries and ambivalence have effectively shielded the Khmer Rouge from accountability for three decades. Parties that were ambivalent, or outright hostile, at various junctures include China, the Khmer Rouge’s strongest international patron, and the current government in Phnom Penh, which is led by former Khmer Rouge member Hun Sen. After Vietnam invaded Cambodia in 1978, the United States supported the Khmer Rouge diplomatically because of Cold War politics, but in the 1990s, after Cambodia held U.N.-sponsored elections, Washington became one of the driving forces behind creation of the tribunal.

Along the way, many key perpetrators have died, including Pol Pot, the Khmer Rouge leader who was deposed by Vietnamese forces in 1979. Since the tribunal began its work in 2006, it has had only one trial, that of Commander “Duch,” who headed the detention facility Tuol Sleng, where “confessions” were extracted from thousands before they were sent off to be murdered in the fields outside the city. Duch was convicted last year; his 35-year sentence was shortened to 19 years because of time served and a finding that he was illegally detained by a military court.

The tribunal’s proceedings have been marked by unusual politicking, including charges of corruption, judicial misconduct, government interference and leaks of confidential information. Such maneuverings probably account for the sense of cynicism we found among ordinary Cambodians during a recent trip devoted to talks with survivors, human rights activists, lawyers and others. When we asked Taing Kim about the court, she said she felt “hopeless.” Her story of being raped by Khmer Rouge soldiers while working at a forced labor camp is one of thousands of survivor testimonies that have been collected by the Documentation Center of Cambodia and provided as evidence to the tribunal.

Fueling the suspicion have been the Cambodian government’s efforts to shut down more cases, even though prosecutors have identified other suspects who should be tried. The government, itself accused of considerable human rights abuses, says that additional trials could threaten the stability of a country just recovering from civil war. Representatives of nongovernmental organizations contend that is a smoke screen for a government populated by former Khmer Rouge officials who might face difficult questions if cases proceed. Many fear the octogenarian defendants will die before justice is served or that donor nations will tire of the slow pace and cost of justice (roughly $150 million so far).

The wrangling obscures the larger significance of the tribunal’s work. Finally, we are tantalizingly close to an official reckoning for the slaughter in Cambodia, by sheer numbers one of the worst cases of state-sponsored mass murder since the Holocaust. Victims like Taing Kim should have their day in court, and many young people are only now learning details of the horrors that took place in their country years ago. That improves the chances that such atrocities will be deterred in the future.

Successful trials would also show mass murderers that time will not wash away their culpability. It would be easy for the West to lose interest in the last chapter of a story that mostly took place decades ago in a far-off conflict once described as a “sideshow” to the Vietnam War. But just as there is no statute of limitations on the crimes of the Holocaust, the victims of the “Killing Fields” must see justice, sooner or later.

Mike Abramowitz is director of the genocide prevention program of the U.S. Holocaust Memorial Museum. Mark Sarna is a member of the program’s advisory board and a son of Holocaust survivors.This op-ed was originally published in the Washington Post on November 21, 2011.