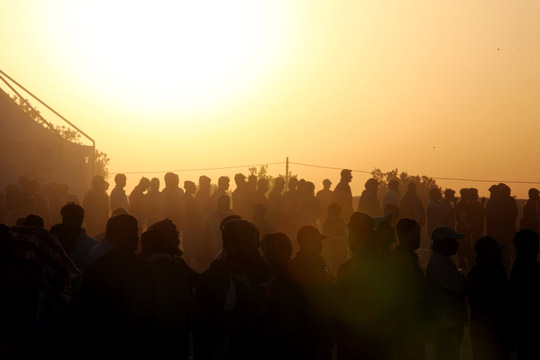 On Friday, April 1, Mike Abramowitz published an op-ed in The Washington Post about the intervention in Libya and what it means for efforts to prevent genocide and mass atrocities around the world:

For many years, the U.S. Holocaust Memorial Museum has sought a more determined approach from governments toward the prevention of genocide and other forms of mass atrocities against civilians. Far better to try to prevent such crimes than to respond after the fact, when the human, financial and moral costs are steepest.

That’s the theory. In practice, prevention is enormously complicated, difficult to implement and easily subject to second-guessing, as we are witnessing in Libya.

Whether or not one agrees with the decision to use military force in Libya, the action by President Obama and other world leaders over the past two weeks — and the president’s explanation Monday night — reveal a substantial shift in thinking over the past two decades about preventing mass atrocities.

During the Rwandan genocide 17 years ago, there was no effort by the United Nations to halt the targeted killing that took the lives of some 800,000 Tutsis and moderate Hutus in just three months. Although peacekeepers were on the ground throughout the war in Bosnia-Herzegovina, more than 100,000 people were killed, 80 percent of whom were Bosniak civilians. While NATO did intervene militarily in 1995, it was only after the Bosnian Serbs had committed what is now internationally recognized as genocide at Srebrenica.

The decision to act in Libya followed reflection in the international community about the failures to prevent genocide in the 1990s. Over the past 20 years, new policies and mechanisms by civil society and governments that strengthen our collective capacity to prevent and respond to genocide include the creation of an office of genocide prevention at the United Nations; a new International Criminal Court in The Hague to try perpetrators of the most heinous human rights abuses; the adoption of a doctrine of “Responsibility to Protect” at the United Nations (invoked in Libya); and steps by individual governments to strengthen their ability to detect and react to potential genocide.

The Obama administration, partly in response to the 2008 recommendations of the Genocide Prevention Task Force, a body chaired by Madeleine Albright and William Cohen, has moved to strengthen the U.S. capacity to prevent genocide. Most notably, these steps include appointing a director for war crimes, atrocities and civilian protection at the National Security Council and a new focus on contingency planning for mass atrocities at the Pentagon and State Department.

It is important to note that, in Libya, no evidence has surfaced that genocide — which is defined by the United Nations as the purposeful destruction of an ethnic, racial, religious or national group — has taken place or is likely to take place. But statesmen had grounds to believe that a massacre of civilians, amounting to crimes against humanity, might transpire. They decided it was better to act quickly than to regret afterward, a central tenet of the emerging genocide prevention movement.

“The United States and the world faced a choice,” President Obama noted Monday night. “Gaddafi declared that he would show ‘no mercy’ to his own people. He compared them to rats and threatened to go door to door to inflict punishment. In the past, we had seen him hang civilians in the streets, and kill over a thousand people in a single day. Now we saw regime forces on the outskirts of the city. We knew that if we . . . waited one more day, Benghazi, a city nearly the size of Charlotte, could suffer a massacre that would have reverberated across the region and stained the conscience of the world.”

Libya is not the only place in the world where mass atrocities are possible. The all-too-many places where civilians are threatened with state-sponsored violence include Sudan, Burma and Ivory Coast, where hundreds of people were murdered in the aftermath of last fall’s elections and a civil war reignited. Each is a unique case, and a cookie-cutter approach will not work.

The larger point is that prevention of mass atrocities is beginning to factor much more heavily into the decisions of world leaders, as we saw in 2008 in post-election Kenya and last fall in Sudan, where the United States and other countries launched an intensive diplomatic campaign to avert widespread violence associated with the January referendum on southern independence. What’s needed is a wider range of more effective tools to prevent and respond to emerging cases, so that even if the situation does not require consideration of military intervention, it still receives the attention of the international community.

Ultimately, there is no one reliable response to heading off mass atrocities. Military action is a last resort. In Libya, it may have forestalled the massacre of thousands. But it is not the only tool available. This situation challenges us to further improve our abilities to identify potential cases and try to prevent them before force is considered.

The writer directs the Committee on Conscience at the U.S. Holocaust Memorial Museum, which co-convened the Genocide Prevention Task Force.