Judge Buergenthal on the Challenges of International Justice 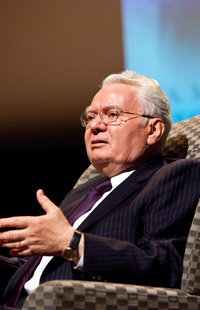 “Today it is easier than it was in the 1930s to arouse the international community to act. That does not mean that such action will always be forthcoming, but it does mean that we now have better tools than we had in the past to spot massive violations of human rights. The task ahead is to strengthen those tools, not to despair.”
A Lucky Child by Thomas Buergenthal

On the eve of the anniversary of the genocide convention, the Museum hosted a discussion with Judge Thomas Buergenthal, a Holocaust survivor who has devoted his life to finding justice and protecting human rights for people throughout the world. A pioneer of international law, Judge Buergenthal served for the last decade as the American judge for the International Court of Justice (ICJ), the principle judicial organ of the United Nations.

A former chairman of the Museum's Committee on Conscience, Judge Buergenthal described the impact of his experiences during the Holocaust and his concerns for – and faith in – the future. He spoke passionately and honestly about critical issues of international justice today, including the refusal of the United States to join the International Criminal Court (ICC) and the ICC indictments against Sudanese President Bashir.

“I also think that the approach of the United States to the International Criminal Court is a terrible tragedy,” Judge Buergenthal said, “as far as our own human rights foreign policy is concerned… The United States has to be party to that tribunal.” Responding to a question from the audience about the ICC’s record, he explained:

…I think it’s too early to evaluate the court. For one thing, the United States is not party, unfortunately. I think sooner or later we will have to become a party… Just as I believed that the United States would ratify the genocide convention, even though we stayed out for more than 30 years before we did it, I think the same thing will happen [with the ICC.] Unfortunately, we often come in too late. But the court is still in much too early stages to evaluate it. What is important is that it exists and that there is finally an International Criminal Court, the first one established after Nuremberg… So in that sense, I think the mere existence of the court is a very important step forward in the international fight against genocide, against crimes against humanity.


In March 2009, the ICC issued an arrest warrant for President Bashir that included charges of crimes against humanity and war crimes for his role in organizing the violence in Darfur. The ICC added a second warrant in July 2010 for three counts of genocide. Yet, Bashir remains president of Sudan in defiance of the international indictment. Addressing this dilemma, Judge Buergenthal said:

…this is actually the first time since I am no longer a judge on the ICJ that I can speak freely about presidents in power. [Bashir] is not as safe as we think he thinks he is. He finds it increasingly difficult to travel even though he’s been able to go to some African countries…. The Security Council is there to help enforce these indictments. And, I think... sooner or later, the Bashir’s of this world are going to realize that it’s not so easy to escape the prisons that they deserve to serve in.


Learn more about the indictments against Bashir and United States policy towards the ICC.