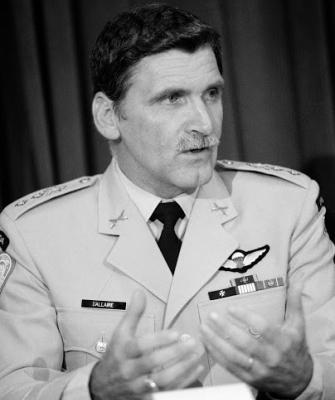 The Museum today released previously unpublished material about a pivotal moment in the lead-up to the 1994 Rwandan genocide, a plan orchestrated at the highest levels of the Rwandan government to wipe out the country's Tutsi minority and others who opposed their policies.  This material includes details behind the so-called “genocide fax”  that was sent by Lieutenant General Roméo Dallaire, then head of the UN peacekeeping forces in Kigali, to his superiors in New York in January 1994—a full three months before the genocide began—to alert them of the impending violence.

In spite of repeated warnings from Dallaire and others, the campaign of killing took the lives of between 500,000 and a million Rwandans, predominantly Tutsis, during 100 days between April and July 1994.

The release of information about the “genocide fax” marks the launch of a new initiative, Failure to Prevent: International Decision-Making in the Age of Genocide, which the Museum is conducting in partnership with the National Security Archive. This documentation and oral history initiative centers around conducting research into the failure of the international community to prevent past genocides.

“The purpose of our project is to open up more information and detail about what happened—or didn’t happen—in the months before the genocide began,” said Mike Abramowitz, director of the Museum’s Center for the Prevention of Genocide. “As we approach the 20th anniversary of the Rwandan genocide, we must ask ourselves what we have learned from that tragedy, one of the most horrifying  and brutal episodes of mass violence that the world has seen since the Holocaust.”

The Failure to Prevent initiative will examine a succession of turning points before and during the Rwandan genocide when international action could have made a difference, and will include collecting, declassifying, and making accessible—sometimes for the first time—key documents from a wide variety of sources. It will also include new interviews with decision makers and eyewitnesses for their firsthand perspectives. Each of these turning points will be released as an “electronic briefing book” containing a selection of annotated and analyzed documents, photographs, and eyewitness testimony.

You can find more information about the Museum’s activities in commemoration of the 20th anniversary of the Rwandan genocide, including the Failure to Prevent initiative, on our website at ushmm.org/rwanda20 and on the Museum’s Facebook. On Twitter, look for #Rwanda20yrs on @HolocaustMuseum.