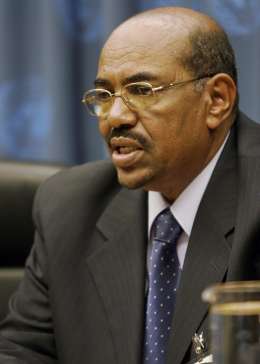 On March 4, 2009, a Pre-Trial Chamber of the International Criminal Court (ICC) announced its historic decision to issue an arrest warrant charging Sudanese President Omar al-Bashir with five counts of crimes against humanity and two counts of war crimes for his leadership role in orchestrating the conflict in Darfur.

The charges against Mr. Bashir include murder, extermination, forcible transfer, torture, rape, intentionally directing attacks against a civilian population, and pillaging. Notably absent from the warrant is the charge of genocide.

This decision marks the first time the ICC has issued an arrest warrant for a sitting head of state.

Some have contended that an ICC indictment of the President of Sudan, which enforces international law and holds him accountable for his crimes, is necessary for sustained peace. Others are concerned that such an indictment could negatively impact the peace negotiations, prolonging war or perhaps even accelerating it – resulting in more deaths, sexual violence, destruction, and misery. These debates intensified in July 2008, when the ICC prosecutor Luis Moreno-Ocampo presented evidence of crimes to a panel of ICC judges and asked them to issue an arrest warrant for Sudanese President al-Bashir on charges of genocide, crimes against humanity, and war crimes for his leadership role in orchestrating violence in Darfur.

The Sudanese government has said it will resist the ICC request, contending that Bashir is innocent. Two others in Sudan – Ahmad Harun, Minister in charge of security, and Ali Kushayb, a janjaweed militia leader – were indicted for war crimes and crimes against humanity by the ICC in 2007. They were not considered senior enough to impact peace negotiations.

Following the announcement of the arrest warrant, the Sudanese government expelled several humanitarian aid agencies from Sudan, jeopardizing the lives of millions.

On March 5, 2009, the Museum issued a press statement, decrying the eviction of aid agencies in Darfur and Southern Sudan.

Background on the International Criminal Court

Based in The Hague, the Netherlands, the International Criminal Court (ICC) is the first permanent judicial body established to try individuals for genocide, crimes against humanity, and war crimes. It prosecutes individuals when national courts are unable or unwilling to do so. The Court emerged from the 1998 Conference in Rome and came into force in 2002, after the 60th nation ratified the treaty. Presently, 108 state parties have joined the treaty.

Heavily engaged in ICC negotiations, the United States signed the Rome Statute under the Clinton administration in 2000, but identified certain aspects of the treaty requiring further negotiation. President Clinton recommended that the Senate delay ratification until U.S. concerns were met about the treaty’s jurisdiction over nationals of states that were non-parties for acts committed on territory of states party to the treaty and the prosecutor’s authority to initiate cases on his/her own. Citing these objections, the Bush administration effectively deactivated the U.S. signature on the Rome Statute in 2002.

Since 2002, the Court has received one referral from the United Nations Security Council for Darfur, Sudan and has accepted three state referrals in the Democratic Republic of the Congo, Uganda, and the Central African Republic.

In 2005, the Security Council referred allegations of crimes in Darfur to the ICC. The council referral exempted the nationals of nonparties from any claim of jurisdiction on the part of the court and consequently the U.S. abstained from vetoing the resolution. The ICC subsequently opened an investigation into the crimes committed in Darfur.

Born in 1944, Omar al-Bashir orchestrated a military coup in 1989 that overthrew President Sadeq al-Mahdi’s democratically elected government. He assumed control by banning all political parties and cracking down on the press and other rights. Shortly after attaining power, Bashir appointed himself chief of state, prime minister, and minister of defense.

In 2004, Bashir’s government negotiated an end to the two and a half decade civil war between north and south Sudan that killed at least 2 million people, mostly civilians, and displaced more than 4 million people. Around that same time, Bashir’s government started receiving criticism for its role in Darfur, Sudan’s western province where hundreds of thousands have died and millions have lost their homes since 2003. In July 2008, the International Criminal Court (ICC) prosecutor Luis Moreno-Ocampo asked the court to issue an arrest warrant for President Bashir, charging him several counts of genocide, crimes against humanity, and war crimes for the government’s role in orchestrating violence in Darfur.