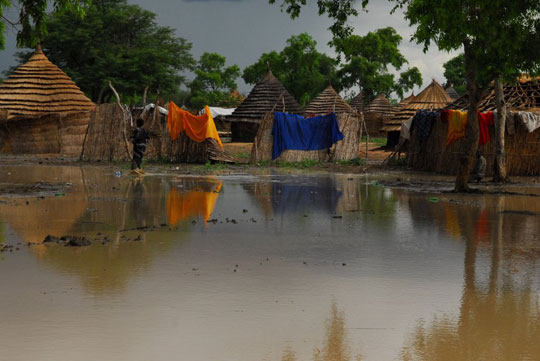 In Foreign Policy, Mike Abramowitz, the Director of the Committee on Conscience at the Museum, and Lawrence Woocher, senior program officer at USIP, discuss the significance of intelligence chief Dennis Blair's testimony to the Senate and his emphasis on the risks facing Southern Sudan.

How Genocide Became a National Security Threat: And what Barack Obama should do about it.

Deep into his Feb. 2 congressional testimony on the U.S. government's annual threat assessment, Director of National Intelligence Dennis C. Blair raised the specter of an unfamiliar threat -- far from the terrorism, nuclear proliferation, and cyberattacks that the rest of his discussion focused on. "Looking ahead over the next five years, a number of countries in Africa and Asia are at significant risk for a new outbreak of mass killing," Blair told Congress. "Among these countries, a new mass killing or genocide is most likely to occur in Southern Sudan."

Blair's testimony was an underappreciated breakthrough. Genocides and mass atrocities have traditionally been seen by the U.S. government as tragedies, but little more. President Bill Clinton never seriously contemplated intervening in Rwanda. George W. Bush's administration insisted that the violence in Darfur was genocide, but made little mention of any threat to U.S. interests arising there. Now, Blair has tacitly acknowledged what human rights groups and humanitarians have long insisted -- that mass killings are not only moral issues, but are threats to the national security of the United States. And in the world of politics, that subtle shift could make a big difference.

Genocide's negative consequences for the United States are increasingly plain. Mass violence destabilizes countries and entire regions, threatening to spread trafficking in drugs, arms, and persons, as well as infectious disease pandemics and youth radicalization. When prevention fails, the United States invariably foots much of the bill for post-atrocity relief and peacekeeping operations -- to the tune of billions of dollars. And even as Washington is paying, America's soft power is depleted when the world's only superpower stands idle while innocents are systematically slaughtered.

This reality has become increasingly stark in recent years, and it is finally catching Washington's attention. In fact, Blair's statement was just one of several signs that Barack Obama's administration is rethinking Washington's response to genocide. This month's Quadrennial Defense Review (QDR), a touchstone planning document for the military, states that the Defense Department should be prepared to offer the president with options for "preventing human suffering due to mass atrocities or large-scale natural disasters abroad." Although the previous QDR in 2006 also referred to humanitarian missions, it did not contemplate responses to mass atrocities. So now for the first time, the military should begin a much-needed process of strategic thinking about preventing genocide.

Even more promising, the White House has moved quietly in the last several weeks to create a high-level interagency committee at the National Security Council aimed at anticipating and preventing mass atrocities. This committee should force policymakers to grapple with the risk of mass atrocities early on, before crises get out of control. It should take control of a process now fragmented between agencies, helping combat the bureaucratic lethargy and ad hoc decision-making that has characterized past U.S. responses to genocide.

Of course, it is reasonable to ask whether these modest steps are truly meaningful when contrasted with the complex roots and incalculable impacts of genocidal violence. Although it's true that attention and organization do not guarantee foreign-policy success, their absence makes it nearly impossible. A year ago, the Genocide Prevention Task Force, chaired by former Secretary of State Madeleine Albright and former Secretary of Defense William Cohen, produced a blueprint of practical steps that the U.S. government could take to prevent genocide and mass atrocities. And it urged just the kinds of actions the administration has taken in recent weeks.

More is needed, of course, after the administrative structures are in place. As the Albright-Cohen task force found, leadership is the "indispensable ingredient" in preventing mass atrocities. Following Blair's statements this month, Obama and his most senior advisors should send even clearer signals to their subordinates and to the international community that preventing mass atrocities advances U.S. national security interests. One immediate move in this direction would be for the National Security Strategy now being prepared by the White House to declare the prevention of genocide an important U.S. objective. The president should then give a major public speech to explain to the American people why such a new approach is necessary.

The test case for all of this could come sooner than we think, as the Obama administration navigates the grave risks posed to civilians in Sudan. With violence down in Darfur and a peace treaty in the works between the main rebel group there and the government in Khartoum, Sudan no longer makes front-page headlines. But the situation for civilians across Africa's largest country is no less dangerous in the coming years, not least because 2.7 million Darfuris continue to live in displaced-persons camps. Moreover, north-south tensions, still boiling after decades of civil war, will come to a head over the next year. National elections in April and a referendum next January on southern independence could rekindle the mass, often ethnic violence that has plagued the country since independence in 1956.

Obama spoke of his commitment to do "everything we can to prevent and end atrocities like those that took place in Rwanda, those taking place in Darfur" at the Holocaust Days of Remembrance ceremony last April. Fulfilling his commitment will mean, among other things, personally engaging his special envoy for Sudan, the State Department, and the Pentagon to forge a strategy to prevent a foreseeable catastrophe.

The top intelligence officer of the United States is now on record warning of possible genocide. Is the rest of the administration up to the task?