In examining the risk of state-led mass killing in Pakistan, the line between state and non-state actors is fuzzy, especially when it comes to perpetrators of mass violence against civilians. Rather than perpetrating violence themselves, Pakistani security forces—especially the Inter-Services Intelligence (ISI), the Pakistani intelligence services—use militant groups to advance political and territorial objectives inside Pakistan and in contested areas like the Indian-administered Kashmir region. Ongoing violent conflict, especially in Pakistan’s northwest Federally Administered Tribal Areas (FATA), also contributes to increased risks of new mass killing.

The Early Warning Project’s statistical risk assessment currently places Pakistan ninth  out of 162 countries most at risk of a new episode of state-led mass killing. Meanwhile, a summary of expert opinion pool forecasts, released in late September, placed Pakistan thirteenth on a list of 36 countries of primary concern for new mass killing. While the groups responsible for previous mass abuses against Pakistani civilians have varied, scholars and regional experts we spoke to about Pakistan suggested that widespread discrimination against the country’s ethnic and religious minorities is the primary driver of the risk of new mass killing by both state and non-state actors.

The “bad regime” theory, which drives the Early Warning Project’s forecast of state-led mass killing in Pakistan, helps explain the relationship between the Pakistani state’s widespread discrimination and physical violence against minorities and the likelihood of future mass killing by state actors and their affiliates (see chart to left). The bad regime theory suggests that key characteristics of state institutions, including exclusive ethnic politics, predispose states to mass violence against their civilian populations. This theory is in ample evidence in Pakistan, impunity for violence and discriminatory legislation create regular opportunities for political instability and violence, especially against minority civilians. 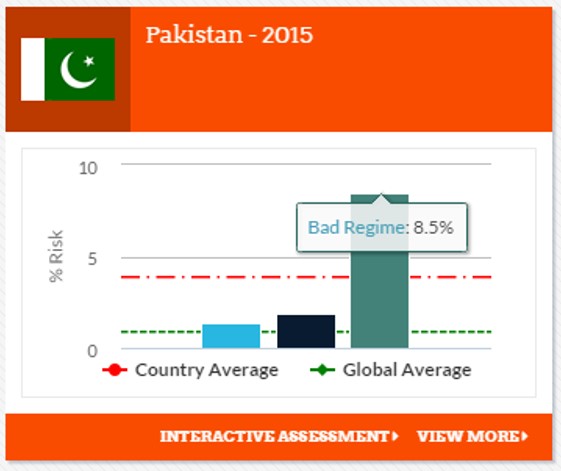 State support for non-state actors is sometimes explicit, if clandestine; elsewhere, the state’s acquiescence to militant groups is implicit, more the result of common interest than of intentional policy. Rather than perpetrating violence themselves, Pakistani security forces have used militant groups to advance political and territorial objectives inside Pakistan and in contested areas like the Indian-administered Kashmir region. Their support for these groups has historically included the provision of arms, training, and funds. While the ISI’s support for Kashmiri militants has been a regular fixture of Pakistani policy in Kashmir, influence over these groups’ operations is slow to follow; a 2009 report by the Council on Foreign Relations observed that mass attacks throughout Pakistan by Pakistan-aligned Kashmiri militant groups have placed those same groups into occasional conflict with Pakistani military forces.

The objectives of many militant groups responsible for much recent violence against Pakistan’s minority civilians—the preservation of a cohesive, Islamic state against external and internal threats—also overlap with the secular national security priorities of the Pakistani state, according to Wilson Lee, senior Asia program officer at the National Endowment for Democracy. Lee points to Pakistan’s so-called “national narratives”--ideologies that inform the objectives of that cohesive state—as an important feature of risks of new state-led mass killing. Here, the “elite threat” theory of mass killing that also informs the Early Warning Project’s statistical risk assessment is instructive. The theory views targeted violence against civilians as a mechanism for elites to repress real or imagined threats against their regimes. In Pakistan, agents of the state commonly confront actions against the “national narrative,” such as open civil society activity or nationalist insurgencies, as in Balochistan, with abusive violence. To the limited extent there are opportunities to reduce risks of new mass killing, Lee suggests, emboldening the public and political influence of a pluralistic Pakistani civil society may provide a meager foundation for the country’s future resilience against potential atrocities.