Debating R2P: Can It Make a Difference? 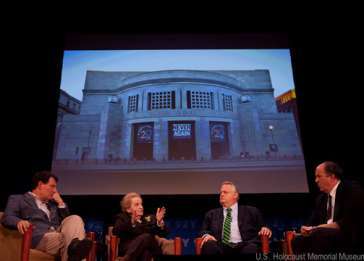 On December 13 at the 92nd Street Y in New York City, the Museum co-sponsored a lively discussion about the Responsibility to Protect, or R2P, the emerging international doctrine aimed at protecting civilians from genocide and other forms of mass atrocities.

The featured speakers were former Secretary of State Madeleine Albright and Ambassador Richard Williamson, two distinguished foreign policy practitioners now chairing a working group on R2P co-convened by the Museum. Also on the panel was New York Times columnist Nicholas Kristof, whose reporting from crises around the world deeply influences public understanding of genocide and mass atrocities. Michael Abramowitz, director of the Museum’s Center for the Prevention of Genocide, moderated the discussion.

After the failed international responses of the mid- and late-1990s in Rwanda and Bosnia, R2P emerged to help policy makers and the world at large better understand that these atrocities are preventable and we all share a responsibility for ensuring they are not replicated. The R2P doctrine departs from past concepts of humanitarian intervention in a key respect. It contends that the first and principal responsibility is imposed upon states themselves to protect their own citizens from the four named crimes that specifically target civilians: ethnic cleansing, crimes against humanity, war crimes, and genocide.

As the situation in Syria highlights, R2P has been unevenly applied and implemented since it was endorsed by every nation in the world at the UN World Summit in 2005. In Libya in 2011, the United Nations Security Council successfully invoked R2P in approving a military operation aimed at forestalling atrocities in the besieged city of Benghazi; in other cases, such as the widespread rape and other atrocities that have taken place over the past ten years in the Democratic Republic of the Congo, R2P has been less successful.

The panelists were in agreement that R2P has been a useful tool—but far from a panacea for the continuing horrors of genocide and mass atrocities.

Watch a video from the event (external link)