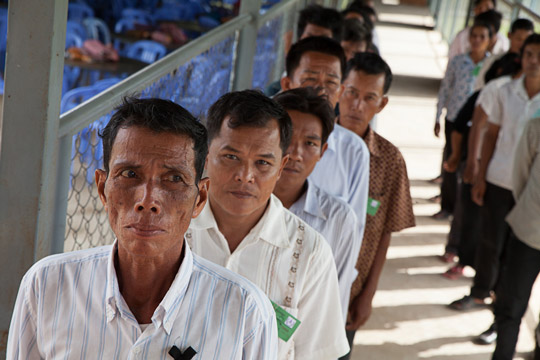 Cambodians arrive from all parts of the country to observe the tribunals. October 2012. —Lucian Perkins for US Holocaust Memorial Museum

One of the most senior of the Khmer Rouge leaders on trial in Cambodia for the mass atrocities committed in that country between 1975 and 1979 has died. Ieng Sary belonged to the inner circle of Khmer Rouge leader Pol Pot and, as Cambodia’s Foreign Minister, was one of the few public faces of the brutal regime that was responsible for the deaths of up to two million Cambodians, between one quarter and one third of the population. He died Thursday in Phnom Penh at the age of 87.

The Museum’s Center for the Prevention of Genocide recently conducted a “Bearing Witness” trip to Cambodia to attend the trial of the last surviving leaders of the Khmer Rouge in the Extraordinary Chambers of the Courts of Cambodia, the ECCC. This tribunal, which is a joint UN-Cambodian operated court, has faced challenges since its inception. Among the greatest of these has been the length of time that has elapsed between when the crimes were committed and when those alleged to be responsible were finally brought to account for their acts. Unlike other recent tribunals, such as the courts in The Hague for the former Yugoslavia and in Arusha for Rwanda, which convened relatively soon after the atrocities committed in those countries, the ECCC only brought the defendants into the dock more than three decades after the crimes with which they are charged.

Elizabeth Becker, a journalist who covered the Khmer Rouge for the Washington Post and author of When the War was Over, was one of the experts who accompanied the bearing witness trip. She was one of the few Western journalists granted access to Pol Pot while he was in power and had interviewed Ieng Sary extensively both in Cambodia and when he represented the Khmer Rouge abroad. She said his testimony before the court would have been significant. “As Khmer Rouge leader Pol Pot’s brother-in-law, Ieng Sary was part of the movement from the beginning, and had intimate knowledge of it,” Becker said. “But this is what happens when you wait 30 years to bring people to trial—this [his death before he could be brought to justice] should never have happened. Cambodians have been deprived of justice. Justice delayed is justice denied,” she added.

Read more about the Museum’s Bearing Witness trip, the challenges facing the ECCC, and the search for justice and accountability in Cambodia here.