Civilians at Risk in Cameroon

COVID-19 is forcing countries around the world to go into lockdown. But for civilians in Cameroon's Anglophone regions, restrictive measures are hardly new.

Since the beginnings of the country's violent Anglophone crisis in 2016, Cameroonian civilians have suffered regular lockdowns and the closures of schools and hospitals, measures imposed by armed separatist groups and state security forces. Actors on both sides of the conflict have been accused of committing atrocities, including deliberate killing of civilians, sexual violence, torture, and burning entire villages. An estimated three thousand Cameroonians have been killed and over 700,000 people forced to flee their homes since the beginning of the crisis.

As the rest of the world is consumed with a global pandemic, and with no end in sight to the fighting between Cameroon’s government and separatist groups, civilians in Cameroon’s Anglophone regions are at immediate risk of mass atrocities.

This risk is highlighted in a new policy brief released by the Simon-Skjodt Center that outlines the situation in Cameroon in greater detail and provides policy options aimed at mitigating future atrocities. (Also available in French.) 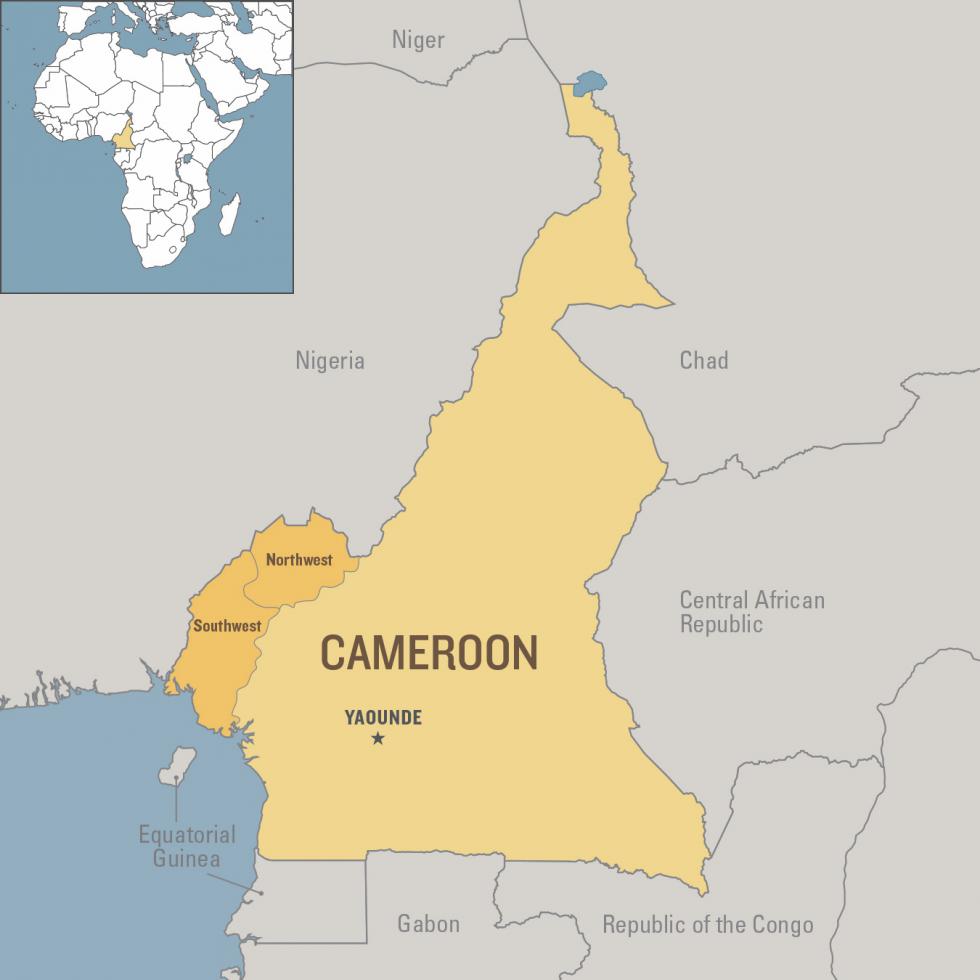 The Center’s Early Warning Project is also monitoring the situation in Cameroon, with the country currently ranked 9th in the world in its Statistical Risk Assessment. This ranking reflects a 7.6% chance of a new mass killing beginning in 2019 or 2020. Even more alarming is Cameroon’s steady rise in risk over the last three annual assessments, from 36th to 17th to its current ranking of 9th.

The Anglophone crisis was ignited in late 2016 following a violent security force crackdown on Anglophone lawyers and teachers who were protesting attempts by the government to prioritize French in courtrooms and classrooms in the Anglophone regions.

Anglophones have accused the Francophone-majority government of instituting discriminatory policies that infringe on their rights and marginalize their community for decades. After the security forces’ crackdown on Anglophone protestors in 2016, however, moderate calls for rights protections escalated into a violent separatist movement.

As the crisis has dragged on, civilians have borne the brunt of the violence. State security forces have engaged in extrajudicial killings, arbitrary arrests, and torture of civilians perceived to support separatists, while separatists have targeted civilians that they deem to be government sympathizers. The violence shows no signs of abating and has even increased in recent months.

In February 2020, state security forces and allied militias carried out one of the deadliest massacres of the crisis, reportedly killing nearly two dozen civilians, including 13 children, in Ngarbuh village in the Northwest region. Cameroon’s government admitted in April that members of the military were responsible for civilian deaths in Ngarbuh and three soldiers were arrested. The massacre came on the heels of an uptick in violence across the Anglophone regions in February, marked by separatist attacks on civilians in the lead-up to that month's elections, which the separatists largely viewed as illegitimate.

Civilians have also been impacted by the targeting of critical infrastructure and basic services by separatists and security forces. Life has been brought to a halt for many across the regions due to a three-year boycott of schools, enforced violently by separatists, and the shuttering of healthcare facilities. Now, with the rise of COVID-19, civilians in the Anglophone regions are at even greater risk as Cameroon has reported the highest caseload of the virus in Central Africa.

Anglophone civilians are at a disproportionate risk of the effects of the virus. Thirty-four percent of health facilities in Anglophone regions are non-functional or only partially functional and there is a severe shortage of medical personnel and supplies due to the destruction of facilities and attacks on aid workers throughout the crisis. Measures to stop the spread of the virus are almost impossible for approximately 700,000 internally displaced Anglophones. Lockdowns, roadblocks, and checkpoints enforced by both separatists and security forces also threaten humanitarian pipelines and could block assistance from reaching the most vulnerable civilians in the Anglophone regions.

While there have been some attempts at resolution of the Anglophone crisis, including an unsuccessful government-led National Dialogue in September and October 2019 that failed to bring both parties to the table, neither side appears willing to make the concessions necessary for a political solution. One separatist group, Southern Cameroons Defense Force, declared a 14-day ceasefire on March 26 in response to the UN Secretary-General’s call for a global ceasefire to help combat the spread of COVID-19, but neither the government nor other separatist groups have followed suit. As recently as the first week of May, raids by the Cameroonian military killed at least 13 civilians, according to the local population. The following week, according to state media and a senior military official, separatist gunmen killed a local mayor in one of the first killings of a senior official in the crisis.

Amid the ongoing violence and the emerging threat of the COVID-19 pandemic, it is imperative that regional actors, concerned states, engaged donors, and the United Nations act urgently to prevent mass atrocities in Cameroon’s Anglophone crisis. The Center’s new policy brief recommends a credible and inclusive mediation process between the government and separatists as well as formal, internationally supported investigations into atrocities committed by both sides. These steps are needed to ensure that civilian populations in Cameroon do not experience future atrocities.

Eric Ross is a research intern with the Simon-Skjodt Center.