Democratic Republic of the Congo, Afghanistan, and Egypt top the list of countries at risk for new mass killing in 2018 or 2019, according to the Early Warning Project’s annual rankings released last week.

On November 28, 2018, at an event at the US Capitol, the Simon-Skjodt Center unveiled the results of its 2018-19 ranking of countries and their risk of experiencing new state or non-state-led mass killings. Senators Todd Young (R-IN) and Ben Cardin (D-MD), as well as Ambassador Samuel Brownback, spoke about the value of the Early Warning Project in supporting the prevention of the world’s worst crimes.

“Tools like the Early Warning Project’s global forecasting can and should help governments, international organizations, and NGOs determine where to devote resources for additional analysis, policy attention, and, ultimately, preventive action,” said Senator Young in his remarks introducing the tool. “Rather than waiting until lives are lost, we should aim to prevent such tragedies before they occur. So by utilizing resources like those of the Early Warning Project, we can do just that.”

Senator Cardin emphasized, “When we can prevent the seeds of hate, turning into atrocities and genocide, it is in our national security interest. It gives us places in the world and countries that are more stable partners for the US—less likely that we’re going to be called on to use our military.”

Addressing the new Early Warning Project report, Cardin said, “What you are releasing today—the statistics on countries that are vulnerable to these types of atrocities is a critically important tool for us to have.”

Ambassador Brownback, Ambassador at Large for International Religious Freedom, noted that “The Early Warning Project and its Statistical Risk Assessment are crucial in identifying and bringing attention to potential problem spots around the world. Too often, just as in the Holocaust, direct attacks on religious minorities in particular are a contributing piece towards intense discrimination, leading to escalating violence, and the potential of genocide.”

The leaders’ remarks were followed by a presentation of results and website demonstration by Simon-Skjodt Center Research Director Lawrence Woocher and a panel discussion with representatives of civil society and academia — key users of the assessments.

David Frey, Professor of History and Director of the Center for Holocaust and Genocide Studies at West Point, spoke as a frequent user of EWP assessments. “My job is to make sure that today’s and especially tomorrow’s leaders are equipped to wrestle with threats they will face...The EWP is one of those tools that has the potential to strengthen our security while simultaneously reducing the need to fight. It is a tool that will benefit the armed forces, the nation, and humanity in general.”

Bridget Moix, US Senior Representative and Head of Advocacy at Peace Direct, said, “Local peacebuilders are a critical missing link in the world's system for preventive action for mass atrocities and one of the most untapped resources globally for prevention. For us, the Early Warning Project offers an opportunity to focus the world's attention on situations earlier, so that more support can be provided to these local civil society actors.”

This year’s assessment is the result of new, refined data and statistical methods that have been chosen to maximize the accuracy and practical utility of the results. At the same time, the Early Warning Project launches its new website, including new information, interactive data tools, accessible reports, and data files that are easier to download.

The Early Warning Project seeks to advance the state-of-the-art in atrocity forecasting to better serve governments and populations at risk.  As a result, the project has adapted as new methods and data become available. Differing from prior years’ assessments, (1) The new results incorporate the risk of state-led and non-state-led mass killing; (2) The new results estimate risk over a two-year period (2018-19 in this report) to better match policy and programming timelines; (3) The risk assessment now takes advantage of newly available data, most notably several measures from the Varieties of Democracy (V-Dem) dataset.

The top ten countries at risk are shown here: 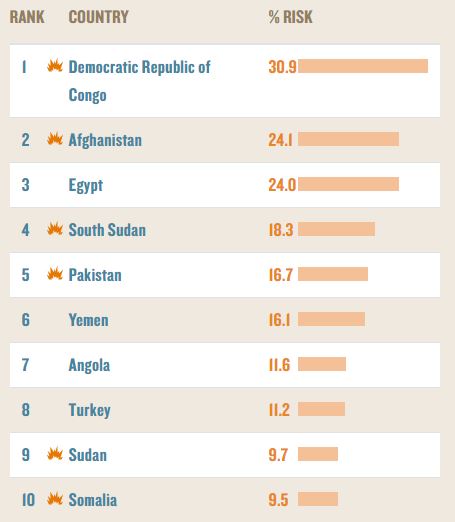 In addition to discussing the countries at greatest risk, our report highlights countries that have been rated consistently high risk over multiple years (Yemen, Turkey, and Burundi), countries where risk has increased over the last year (Zimbabwe and Cameroon), and unexpected results (Angola, Côte d’Ivoire, and Haiti, as surprisingly high; Venezuela as surprisingly low). The web site includes guidance on how to interpret the Statistical Risk Assessment results, emphasizing that they should be a starting point for additional discussion and analysis about where preventive action is most needed.

Learn more about the project, explore the data on the Early Warning Project’s interactive map, or select a specific county to explore its risk factors and learn more about its risk over time.

NEXT POST: Museum Determines Genocide Committed in Burma against the Rohingya