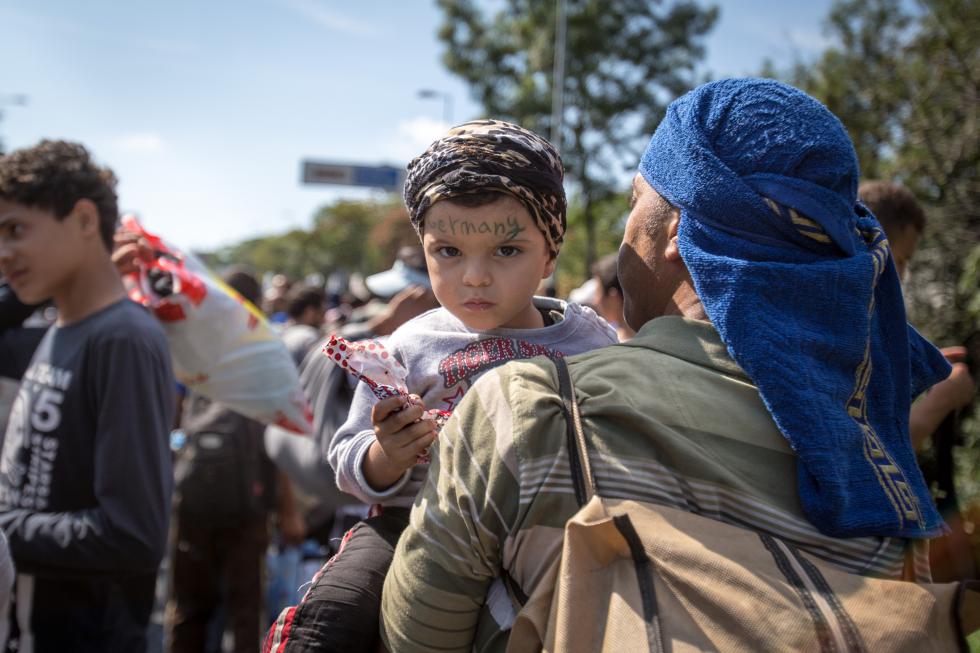 A crowd of more than a thousand refugees walk from Budapest, Hungary, toward the Austrian border on September 4, 2015. Many hoped ultimately to gain asylum in Germany. —Andras Mayer for US Holocaust Memorial Museum

“Take many pictures. The world must know.”

In the 1930s, the world watched as Nazi Germany forced its beleaguered Jewish population to leave their homes. The plight of Germany’s Jews engendered sympathy, but few countries opened their doors wider to admit more of the desperate refugees. While different in many respects, today the world—and Europe in particular—is facing the largest refugee crisis since World War II. Millions of Syrians, Iraqis, Afghans, and others displaced by violence are undertaking perilous journeys over land and water in search of safety.

Hungary has become a flash point as it attempts to deal with the influx. On September 1, 2015, the government suspended train service at the Keleti train station in Budapest, stranding thousands seeking refuge. Museum staffer Nadia Ficara was in the city on a Museum trip to Holocaust sites and memorials. Camera in hand, she went to the train station to capture this historic moment. Here is what she saw. 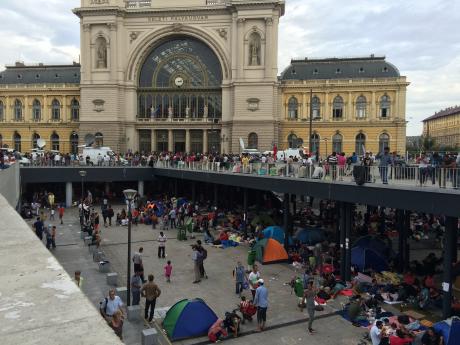 Throngs of people set up camp outside the Keleti station in Budapest, hoping to board trains to Germany. —Nadia Ficara, US Holocaust Memorial Museum 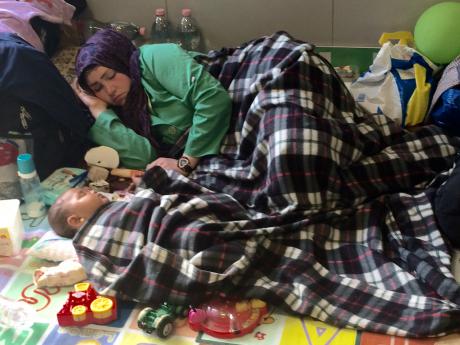 Inside the station mothers huddle with their children, waiting to leave. —Nadia Ficara, US Holocaust Memorial Museum

I make my way to the Keleti train station in Budapest with Walter, an Austrian friend who is trying to find the nephew of a Syrian refugee he is sponsoring in Salzburg. We work out a plan should we separate. The throngs of people—thousands of them—outside and inside the station, on both the upper and lower levels, are mind-numbing.

There is a bullhorn and men shouting in front of the station. Walter starts to pull me away to safety. “No,” I say. “It’s okay.” The men are just chanting Germany! We want to go to Germany! Walter and I walk inside and are quickly separated. Normally I hate crowds; they scare me. But I am not scared here.

I walk down a flight of stairs and see a group of women. One is wearing a t-shirt that says La vie c’est très belle and I can only think of the irony. The Arabic I haven’t spoken in nearly 30 years is suddenly crossing my lips. I tell one of the women my name: Nadia. “My father is Syrian,” I say. “I am Syrian. I have family in Syria.” She welcomes me with a warm smile and asks what district I’m from. I can’t remember the name of the area where I lived in Damascus in the 60s, but I ask if she knows the Souk Hamidiyah, the historic bazaar. “Of course,” she says. Then I ask if she knows Bouza Bakdash, a famous ice cream parlor in the souk. Her face lights up as she tells me that everyone knows Bouza Bakdash. And now I know I can talk to her. “My name is Nadia Bakdash and it belongs to part of my family.”

Her name is Najat and she’s from Damascus. She and her friends talk about Hungary’s politics and the obstacles that keep them from traveling freely. Her clothes are dirty. “I come from a good family,” she says. “I had nice clothes and a nice home.” She looks like she’s about 30 but I learn she’s only 18. “I have not had a bath in 25 days. I don’t hurt anyone. I just want to go to Germany.”

“The story of the train that was promised to take refugees to Germany but took them to a camp instead has spread like wildfire through the station.”

This is a time of cell phones and news travels fast. Najat explains that she and her friends sit on the stairs because from there they can see if the police are coming and they can run up or down the stairs to avoid them. They will not get onto any train. They don’t belong in any camp. “We are not bad people,” she says.

I’m new at this. My Arabic is starting to fail me but I realize it’s because I just don’t know what to say—apologies seem meaningless. I ask if Najat and her friends need anything. All of them say no, thanking me profusely for the offer. “There are women here who are pregnant, who have small children,” Najat says. “Whatever you might have to give, please give it to them.” I ask if I can take her picture. “No, please. My soul is all I have right now.” Three of her friends let me take their picture and I thank them. I hug Najat and wish her well.

There is a commotion and it grows louder. Someone has brought out a box of bananas. Men are crowding around the man—a volunteer or shopkeeper—with the box. He tells them, “Share, just take a few. I will come back with more.” I am surprised when no one takes more than two.

Mats, pillows, blankets, shoes—people’s possessions are strewn all across the floor. Pup tents and sleeping bags line one of the makeshift pathways. There are sad and forlorn faces, people huddled in circles talking. Others are sleeping. Mothers nurse their babies. Children make a play thing out of anything they can find. I see three or four kids playing in a shopping cart, madly pushing it along until it gains speed. It’s going to hit a man—I catch it. The man is Walter. I’ve found him without looking.

Miraculously, he has found the boy he was looking for, Mahmoud, but Mahmoud won’t leave with him, even though Walter has already worked out a border crossing for him. Walter is frustrated and doesn’t understand why Mahmoud won’t go. I speak with Mahmoud. He is rail thin, wearing jeans and a cowboy hat and a smile so wide and endearing that you can’t see anything else.

“Mahmoud—that was my father’s name,” I tell him.

“He was from Syria, just like you,” I say. “Why won’t you go with Walter? He will get you to Austria safely, to your uncle.” He smiles even more broadly. “My mother said that I must go to Germany.” I explain that he must go through Austria to get there. “No, I have to go to Germany,” he insists. I cannot convince him. Walter exchanges numbers with a man in the station who has taken Mahmoud under his wing. Two days later, we learn that the man and Mahmoud have made it to Austria on one of the buses.

I take pictures. I ask permission—always. Most women decline. The men do not and often pose, smiling. I don’t have paper to write down names. I have a pen and start writing on my hand and then up my arm.

“I record their first names and the number of days they have been waiting in Budapest. Seven days, 12 days, 15.”

I look down at my arm covered in ink and somehow feel closer to them all. I think of how I used to scold my children for writing on their hands.

There is a another commotion. Louder. More people. Walter and I move quickly to a side wall. But it’s only a call for people to go upstairs to the front of the station. We go up using different stairs. The bullhorn is out. There’s a Rastafarian calling out in Arabic and sharing the bullhorn with a Syrian. Ea’aaodo, ea’aaodo! they yell. (Everyone sit down, everyone sit down!) I realize they are asking people to calm down only to keep them from scaring the police who have stayed inside the station, riot gear at the ready, observing. Peace to all, the men yell. Love to all. Peace to the Christians. Peace to the Jews. Peace to the Arabs. The crowd echoes the words.

There is a man holding up a sign. Freedom, equality, solidarity it says in big letters. Then there are words in Hungarian that I don’t understand. Finally words in English again: Wake up! Love is the answer!!!

The English text seems odd, something lost in translation. Later I learn it’s a direct translation of the Hungarian words on the sign, a slogan of the Fidesz party, the major national conservative party of Hungary which has authoritarian tendencies. The refugees understand the irony of it all.

A Syrian walks up to me. “Hungarian?” he asks. I tell him I’m a Syrian American. He says, “Take many pictures. The world must know.” Stunned by his words, I lose him in the crowd before I can compose myself.

Learn More
To learn about the ongoing conflict in Syria, which has displaced more than 11 million civilians, visit ushmm.org/syria. To learn about the plight of Jewish refugees from Nazi Germany, visit our Holocaust Encyclopedia.

NEXT POST: How the Early Warning Project Assesses Syria