Forty years ago, the fall of the genocidal Khmer Rouge regime marked the end of four brutal years of mass deportation, forced labor, and extermination, which claimed the lives of an estimated two million people. On this anniversary, Cambodia provided a fitting backdrop for the 14th Conference of the International Association of Genocide Scholars (IAGS 2019) aimed at rethinking genocide studies and prevention.

From July 14–19, researchers from the Museum’s Simon-Skjodt Center for the Prevention of Genocide attended this international, mutli-disciplinary conference, engaging with scholars and practitioners on contemporary issues in the field of genocide studies. As a bridge between the genocide research and policy communities, the Simon-Skjodt Center’s work ties to several prominent research themes at IAGS 2019:

Several scholars at IAGS 2019 presented research on new methods for forecasting mass atrocities as a tool to support prevention. Some expanded on existing predictive models by incorporating additional cases of targeted killings, while others sought to identify the unique dynamics that lead to genocide, distinct from other forms of mass violence. In this vein, the Simon-Skjodt Center’s Early Warning Project produces an annual Statistical Risk Assessment ranking 162 countries on their likelihood of experiencing an onset of mass killing. These various forecasting endeavors can help government and civil society actors alike evaluate risks of atrocity and engage in preventive action.

Definitions and Dynamics in the Study of Mass Atrocities

Scholars challenged traditional approaches to genocide studies by proposing new questions and directions for research. One panel addressed how starvation crimes might be more deeply incorporated into the study of mass atrocities and international criminal law. Other scholars brainstormed how different social theories could help frame future study on atrocity perpetrators and their roles both during and after genocide. An ongoing project at the Simon-Skjodt Center similarly seeks to fill gaps in the literature by investigating the role of civilians in preventing and mitigating mass atrocities, where study has previously centered on state actors. As new voices are introduced into the scholarship and the nature of mass atrocities changes overtime, the scope of genocide studies and atrocity prevention will inevitably continue to expand. 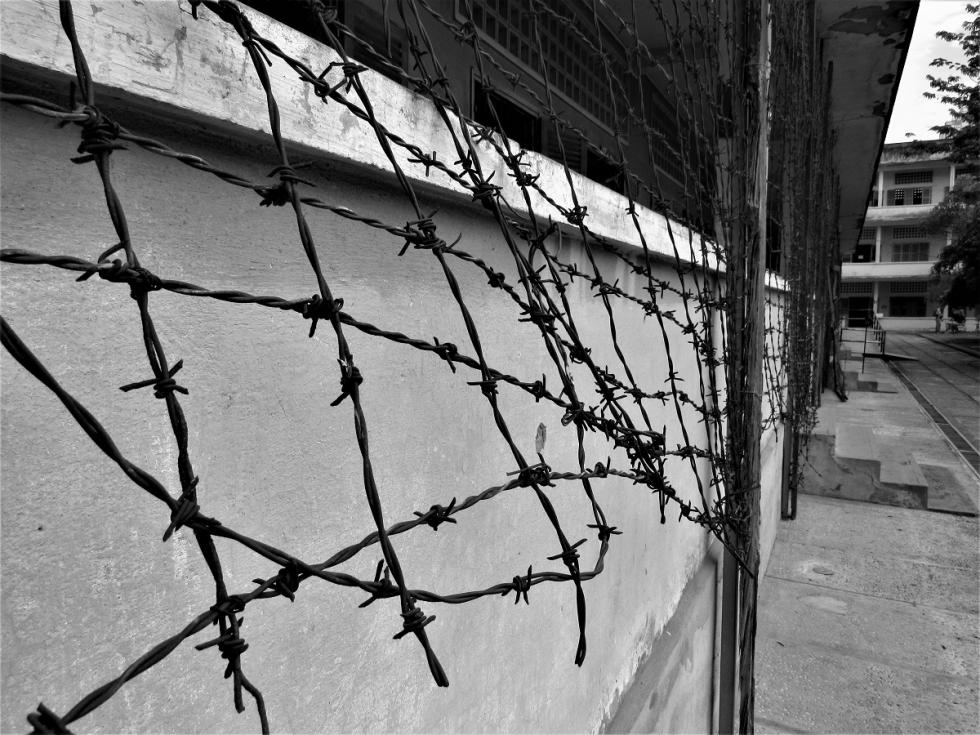 Outside Building C at the Tuol Sleng Genocide Museum, where barbed wire remains on the walls. —Jamie Wise

IAGS 2019 examined on processes of transitional justice and memorialization in the Cambodian context by hosting day-long programs on the Extraordinary Chambers in the Courts of Cambodia—commonly known as the Khmer Rouge Tribunal—and the Tuol Sleng Genocide Museum—a former Khmer Rouge torture and detention center also called S-21. Interactive sessions examined how these respective institutions were developed and addressed their lasting impact. Through its Ferencz International Justice Initiative, the Simon-Skjodt Center supports local actors pursuing justice and accountability for atrocity crimes by convening justice advisory groups in Burma, Iraq, and South Sudan. These efforts toward remembrance and redress are helping to shape the future of atrocity prevention, in study and in practice.

As IAGS 2019 concludes in Cambodia, it is perhaps an apt time to reflect on the ability of societies to recover from a violent past. Cambodia continues to face the challenges of reckoning with its difficult history and educating second and third generation youth about the Khmer Rouge period. In places like Syria and Burma, much of the hard work ending mass atrocities and seeking justice lies ahead. The Simon-Skjodt Center strives to enable research and policy to confront these and other mass atrocities past, present, and future.

PREVIOUS POST: Scenarios of mass killing did not occur in Bangladesh’s 2018 elections