Christian Persecution of Jews over the Centuries: Introduction

Introduction to Gerald S. Sloyan’s article on Christian Persecution of Jews Over the Centuries

Antisemitism has many parents. Scholars of ancient civilizations have revealed the presence of a cultural antipathy towards Jews and their religion in Greco-Roman society. There is little question that some of the early Gentile converts to Christianity shared in this cultural bias. As Gentiles they also were not well acquainted with the internal life of the Jewish community at the time of Jesus. Hence they read many of the New Testament texts as condemnations of Judaism as such rather than internal quarrels which were commonplace within the Jewish community of the period. 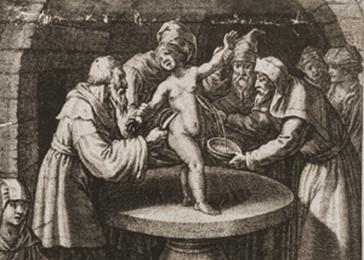 This image of a medieval etching, depicting Jews committing a purported ritual murder, was featured on the front page of the Nazi weekly Der Stürmer in 1939. US Holocaust Memorial Museum

Competition for converts and other factors led to an intensification of Jewish-Christian conflict towards the end of the first century even though there is evidence of continued Jewish-Christian interaction, including Christian participation in Sabbath worship, in some areas well beyond that. These conflicts had a negative impact on the writers of certain parts of the New Testament especially the author of the gospel of John which was compiled about this time. In several places John’s gospel associates “the Jews” with darkness and with the devil. This laid the groundwork for centuries of Christian characterization of Jews as agents of the devil, a characterization which found its way into medieval popular religion and eventually into passion plays.

In the second century and beyond, many of the principal Fathers of the Church began to write of Jews as a “rejected people” who were doomed to a life of marginality and misery. Jews were to wander the world as a “despised people.” This image persisted in Christian preaching, art and popular teaching for centuries to come. In certain countries it often led to civil and political discrimination against Jews and in some instances to physical attacks on Jews which resulted in death. While some Popes, bishops and Christian princes stepped up to protect Jews, they were clearly a minority. It was only in the mid-twentieth century that the Catholic Church and many Protestant denominations issued major statements repudiating this anti-Judaic theology and began a process of constructive Christian-Jewish interaction. 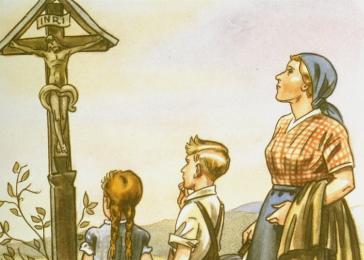 A page from an antisemitic book for children, titled Der Giftpilz (The Poisonous Mushroom), distributed by Der Stürmer’s publishing house in 1938. US Holocaust Memorial Museum

When the Nazis came on the scene in Germany they were able to draw upon the legacy of Christian anti-Judaism even though biologically-based antisemitism went well beyond classical Christian anti-Judaism by arguing for the annihilation of the Jews rather than only for their misery and marginality. Christian antisemitism provided an indispensable seedbed for the success of Nazism on the popular level. It led some Christians to embrace the Nazi ideology and many others to stand on the sidelines as masses of Jews were exterminated.

In the following pages noted Scripture scholar and theologian Gerard Sloyan has detailed in chronological fashion the “shadow” on the cross of Christianity. It does not make for pleasant reading. But it is a legacy that must be confronted with honesty and remorse. Knowledge of this history of antisemitism within the Christian churches is indispensable for any full understanding of the Holocaust.