The Holocaust confronted Christian leaders at the time and after 1945 with grave ethical and theological questions:

The Nazi rise to power in Germany was greeted by most Christians in Germany with optimism. They welcomed the new regime and particularly embraced its nationalism, and both the Catholic and Protestant churches there pursued a course of compromise and accommodation with the regime, particularly when conflicts arose over Nazi state interference with church programs. Among European ecumenical leaders, there were worries about the possible anti-Christian repercussions of a fascist ideology and fears of renewed German militarism under Nazism. In 1933 most European and US Christian leaders, however, took a "wait and see" attitude.

Throughout the Christian world, there was little condemnation of the most striking and ominous element of Nazi ideology: its virulent antisemitism and its threat to remove Jews from all aspects of German society. Indeed, many Christian leaders before and throughout the Nazi era cited Christian teachings as a justification for anti-Jewish rhetoric and policies.

Some church leaders, however, did protest against the Nazi treatment of the Jews and attempted to help refugees fleeing Nazism. In the United States, many of these leaders had been involved in Jewish-Christian dialogue and interfaith work before 1933.

This interreligious cooperation arose from the common ground of religious concern on social justice issues, particularly labor issues and civil rights. This engagement, which often began locally, sparked national institutional commitments to interreligious understanding. In 1923 the Federal Council of Churches (the FCC, precursor of today’s National Council of Churches) established a sub-committee, the Commission on International Justice and Goodwill, to reduce anti-Jewish, anti-Catholic, and racial prejudice. This Commission worked throughout the 1920s to promote increased local contacts among the three major faiths. This led to the founding of the National Conference of Christians and Jews (NCCJ) in 1928. The NCCJ promoted a number of initiatives to foster interreligious understanding, ranging from pulpit exchanges to discussion groups where Catholics, Protestants, and Jews explained points of doctrine to one another. Early Christian and Jewish leaders who were involved included FCC president Rev. Samuel Cavert, NCCJ president Rev. Everett Clinchy, Rabbi Stephen Wise, Jonah Wise, and Felix Warburg.

In Europe, those who spoke out included ecumenical Protestant leaders, who helped create a network of small resistance and rescue movements throughout Europe. 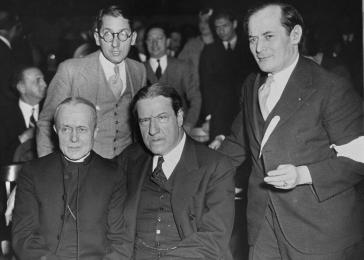 By the beginning of April 1933, when 3,000 Jewish refugees had arrived in Switzerland, Swiss Protestant church president Henry Henriod sent a message to the German churches asking for a clear position of protest against Nazi measures. That same month, French Protestant leader Wilfred Monod published an open letter welcoming the Jews coming from Germany to France. In May 1933, British Bishop George Bell wrote Hermann Kapler, president of the German Church Federation, of his concern about actions against the Jews. At the ecumenical World Alliance conference in Sofia, Bularia, in September 1933, the delegates passed a resolution condemning the Nazi actions against the Jews: “We especially deplore the fact that the state measures against the Jews in Germany have had such an effect on public opinion that in some circles the Jewish race is considered a race of inferior status.” These Christian leaders eventually became part of a network, coordinated primarily from the Protestant ecumenical offices in Geneva, that aided Jews throughout Europe.

Thus, there were significant but isolated voices of protest. Many of these statements drew on church teachings about compassion and social justice, as well as church commitments to civil liberties. Yet, they appear to have found little resonance within the broader community of lay Christians at the time. And, although they did lay a foundation for Christians after 1945 to wrestle theologically with the reality of what had happened during the Holocaust, most of them did not yet confront the theological reality revealed in the Holocaust: that centuries of anti-Jewish teachings by the Christian churches had helped to create a culture in which the genocide of millions of Jewish men, women, and children was possible. Only after 1945 would the Christian churches throughout the world begin to confront the deeper theological challenges of the Holocaust for Christian faith and teaching.

Following World War II, the churches’ coming to grips with the Holocaust basically followed the same path as that of the public in general. The initial horror at the revelation of what had happened gave way to a kind of numbed silence, out of which there only gradually emerged the realization that these were realities with which one must come to terms. Christians, in particular, became painfully aware of the ways in which the age-old “teaching of contempt” toward Jews and Judaism had paved the way for the Nazi program of hatred, dehumanization, and genocide. What may have been viewed as merely a theological opinion—the “supersessionism” that declared the Jewish faith inferior and outmoded once the Christian era had arrived—proved to have tragic real-world consequences.

As early as the 1930s and 1940s, scholars like James Parkes in England, Jules Isaac in France, and A. Roy Eckardt in the United States had prepared the way for this admission of complicity through their work on the long history of antisemitism in Christian culture. Jules Isaac, whose book The Teaching of Contempt (L’enseignement du mépris, 1962) gave currency to that phrase, was influential in the formulation of the famous “Ten Points of Seelisberg,” issued by the Christian members of the newly formed International Council of Christians and Jews in Switzerland in 1947. The Seelisberg statement rejected “any presentation and conception of the Christian message which would support antisemitism under whatever form,” and urged Christians to “remember that Jesus was born of a Jewish mother of the seed of David and the people of Israel.” Read the full text of the Seelisberg statement (external link).

At its founding assembly in Amsterdam in 1948, the World Council of Churches declared:

“We call upon all the churches we represent to denounce anti-Semitism, no matter what its origin, as absolutely irreconcilable with the profession and practice of the Christian faith. Anti-Semitism is a sin against God and man.”

To this the Council’s third assembly (New Delhi, 1961) added the admonition:

“In Christian teaching, the historic events which led to the Crucifixion should not be so presented as to impose upon the Jewish people of today responsibilities which must fall on all humanity, not on one race or community.”

Similarly, the House of Bishops of the Episcopal Church (USA) in a 1964 statement rejected any imputation of “deicide” to the Jews, stating that this is “a tragic misunderstanding of the inner significance of the crucifixion.”

In the Roman Catholic realm, one of the most concrete early actions was Pope John XXIII’s in 1958 removing the phrase “the perfidious Jews” from the Good Friday liturgy. It was also this beloved pope who convened the Second Vatican Council, which in its final session in 1965 approved the famous Nostra Aetate declaration. Its central assertions about the Jews read as follows:

“Even though the Jewish authorities and those who followed their lead pressed for the death of Christ (see Jn 19:6), neither all Jews indiscriminately at that time, nor Jews today, can be charged with the crimes committed during his passion. It is true that the church is the new people of God, yet the Jews should not be spoken of as rejected or accursed as if this followed from holy scripture.... Remembering, then, its common heritage with the Jews and moved not by any political consideration, but solely by the religious motivation of Christian charity, it deplores all hatreds, persecutions, displays of antisemitism directed against the Jews at any time or from any source.”

In the ensuing years, many national Catholic bishops’ conferences, including those of France, Germany, Italy, Poland, Hungary, Switzerland, the Netherlands, and the United States, issued forthright statements of analysis and confession regarding the church’s complicity in antisemitism. Typical is the 1988 statement of the bishops of West Germany, Austria, and Berlin, significantly titled: “Accepting the Burden of History: Common Declaration on the 50th Anniversary of the Pogroms Against the Jewish Community on the Night of 9-10 November 1938.” The German bishops characterized the events of Kristallnacht as “street terror of the vilest dimensions,” and acknowledged with shame that the churches at the time “did not speak a public word of condemnation.”

Numerous Protestant statements were also issued during these decades. The United Methodist Church issued “Bridges in Hope: Interreligious Dialogue between Jews and Christians” in 1972, updating it in 1996 with “Building New Bridges in Hope.” The 1987 General Synod of the United Church of Christ affirmed that “God’s covenant with the Jewish people has not been rescinded or abrogated by God, but remains in full force,” while a document of the Presbyterian Church (USA) issued the same year explicitly renounced the idea that Christians have replaced Jews as “the people of God.” The Evangelical Lutheran Church in America directed itself particularly to the baleful heritage of Martin Luther, and in its 1994 “Declaration to the Jewish Community” the ELCA decisively repudiated Luther’s anti-Jewish views. Speaking of Luther’s anti-Jewish treatises, the statement declares:

“We reject this violent invective, and yet more do we express our deep and abiding sorrow over its tragic effects on subsequent generations....We recognize in anti-Semitism a contradiction and an affront to the Gospel, a violation of our hope and calling, and we pledge this church to oppose the deadly working of such bigotry, both within our own circles and in the society around us.”
Read the full text (external link)

Undoubtedly the most prominent figure contributing to Christian-Jewish rapprochement in recent years was the late Pope John Paul II. Acquainted with Jews and Judaism from the days of his childhood in Poland and his service as bishop of Krakow, John Paul II never flagged in his concern to renew and deepen the bond between the Christian and Jewish communities. His historic visit to the Great Synagogue in Rome in April 1996 and to the Western Wall in Jerusalem in March 2000 were vivid demonstrations of this concern, as were his many addresses on the subject.

His successor, Pope Benedict XVI, demonstrated his identification with this tradition very early in his pontificate, through his August 2005 visit to the Roonstrasse Synagogue in Cologne and his subsequent meeting with the International Jewish Committee on Interreligious Consultations, in which he stressed the imperative of “continued reflection on the profound historical, moral, and theological questions presented by the experience of the Shoah.” In an address on the occasion of the January 2006 visit to the Vatican by Dr. Riccardo DiSegni, Chief Rabbi of Rome, Pope Benedict reaffirmed the “mutual esteem and trust” that, he said, has prevailed between Catholics and Jews especially since the Second Vatican Council. “The Catholic Church is close to you and is your friend,” the Pope stated. “Yes, we love you and we cannot fail to love you.” Read the full official English translation of this address (external link).

—Dr. Franklin Sherman, former member of the Museum’s Committee on Ethics, Religion, and the Holocaust and former Associate for Interfaith Relations of the Department for Ecumenical Affairs, Evangelical Lutheran Church in America

For further information and documentation, see the website of the International Council of Christians and Jews (external link), and especially for Roman Catholic materials, the Center for Christian-Jewish Learning at Boston College (external link).