Previous: Behind the Enemy Powers: the Jew Next: Julius Streicher 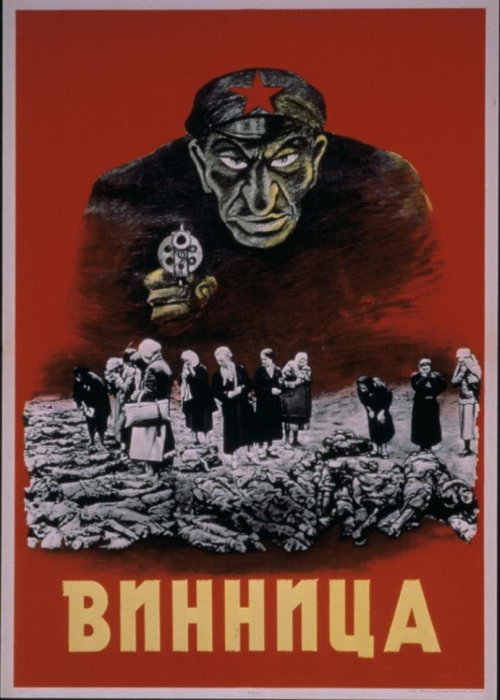 VINNITSA Nazi antisemitic propaganda frequently linked Jews to the fears of their German and foreign audiences. This poster, displayed in the German-occupied Soviet Union to foment both anti-Soviet and antisemitic fervor, uses the stereotype of the bloodthirsty “Jewish Bolshevik commissar” to associate “the Jew” with the murder of more than 9,000 Soviet citizens in Vinnitsa, Ukraine, an atrocity committed by Stalin’s secret police in 1937–38. German forces uncovered the massacre in May 1943. Unknown artist, 1943.–Library of Congress, Prints and Photographs Division, Washington, DC

This image is for the promotion of State of Deception: Power of Nazi Propaganda (or for the United States Holocaust Memorial Museum general press kit) only. Any reproduction of the images must include full caption and credit information. Images may not be cropped or altered in any way or superimposed with any printing.

Previous: Behind the Enemy Powers: the Jew Next: Julius Streicher