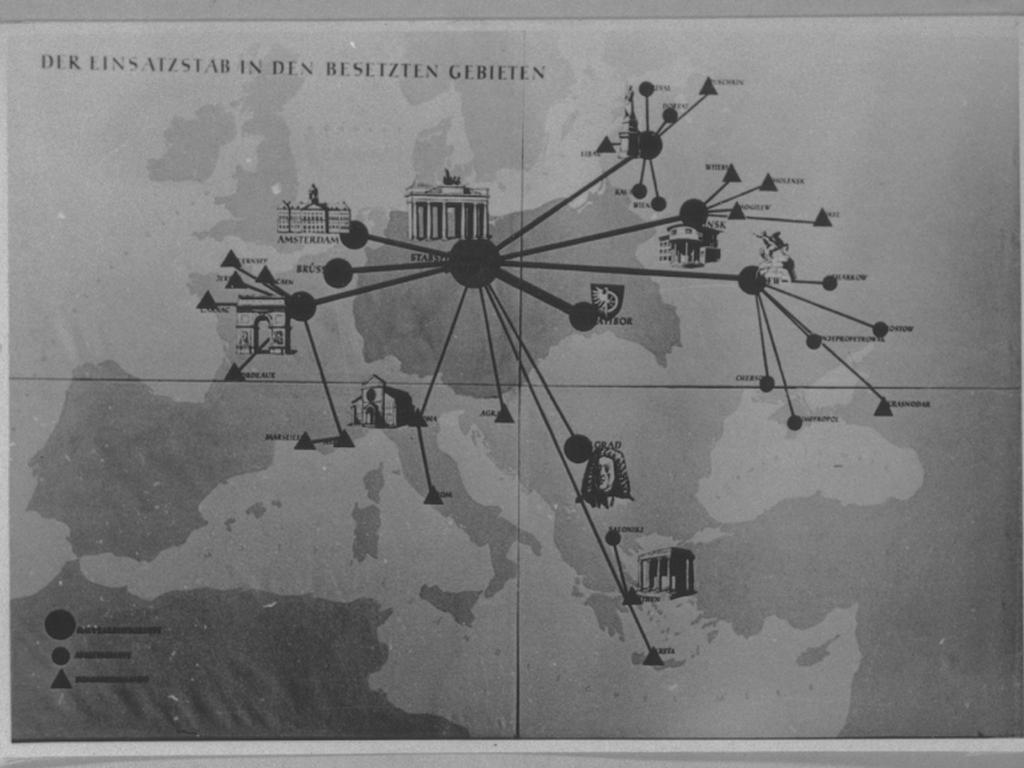 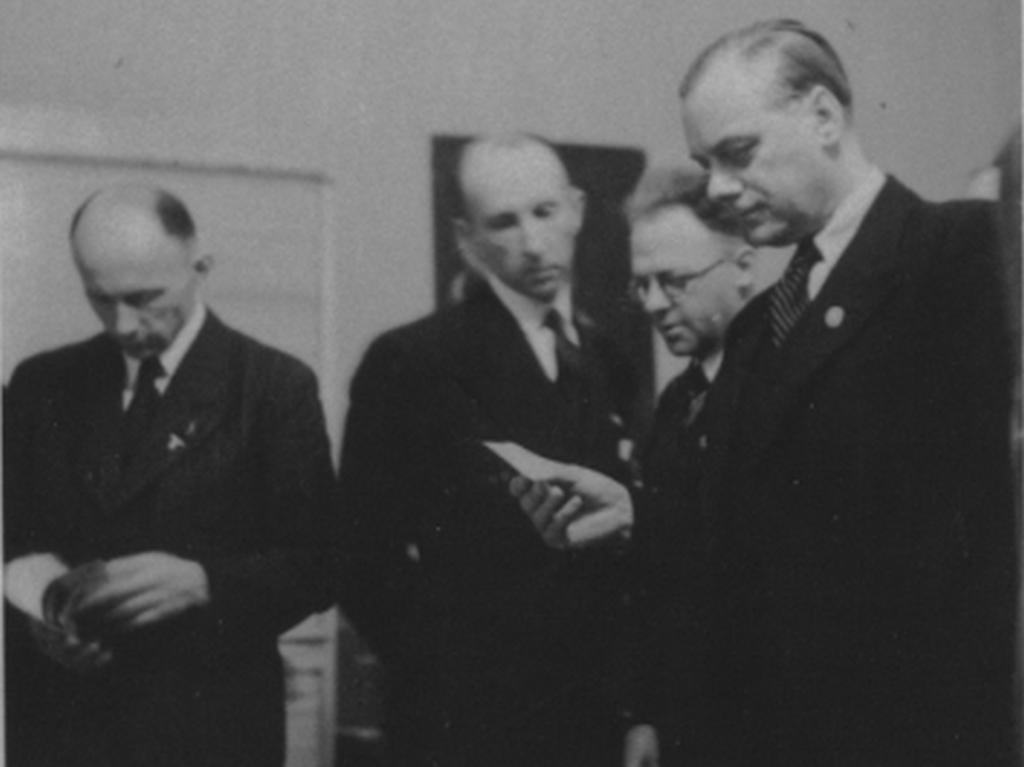 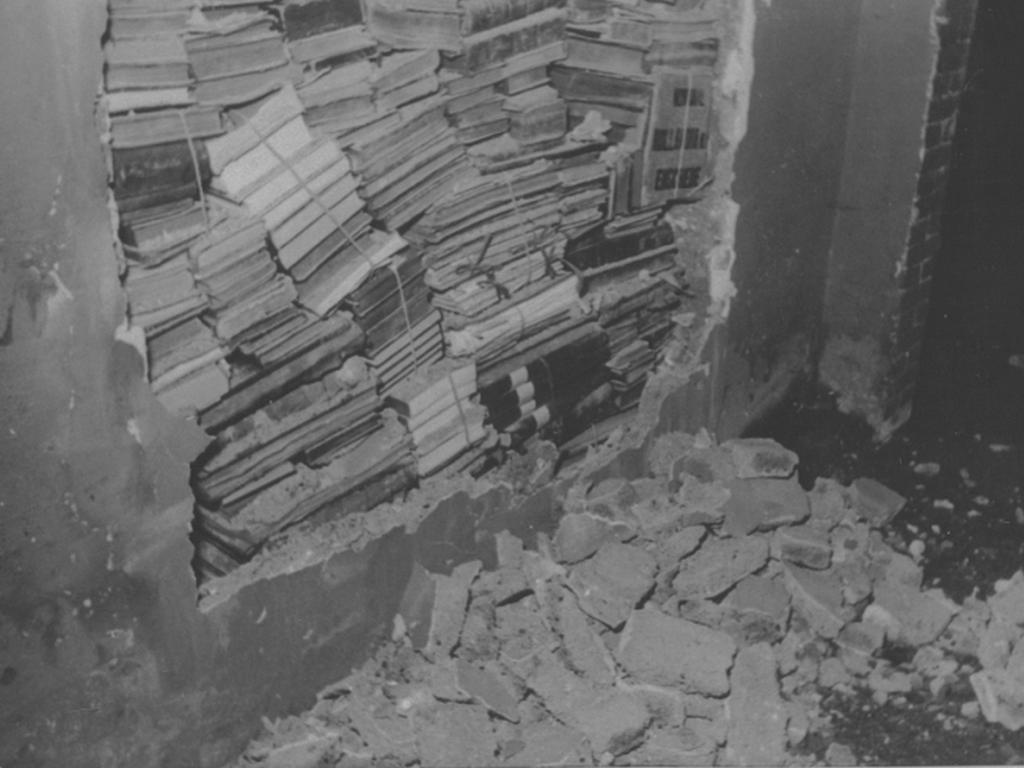 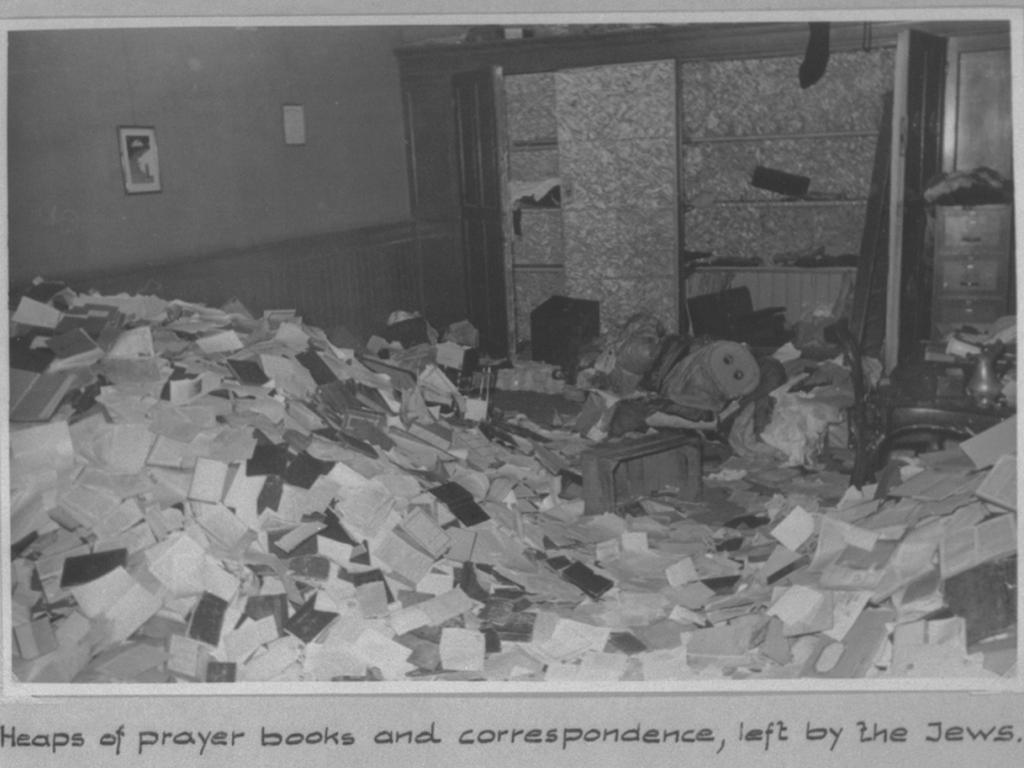 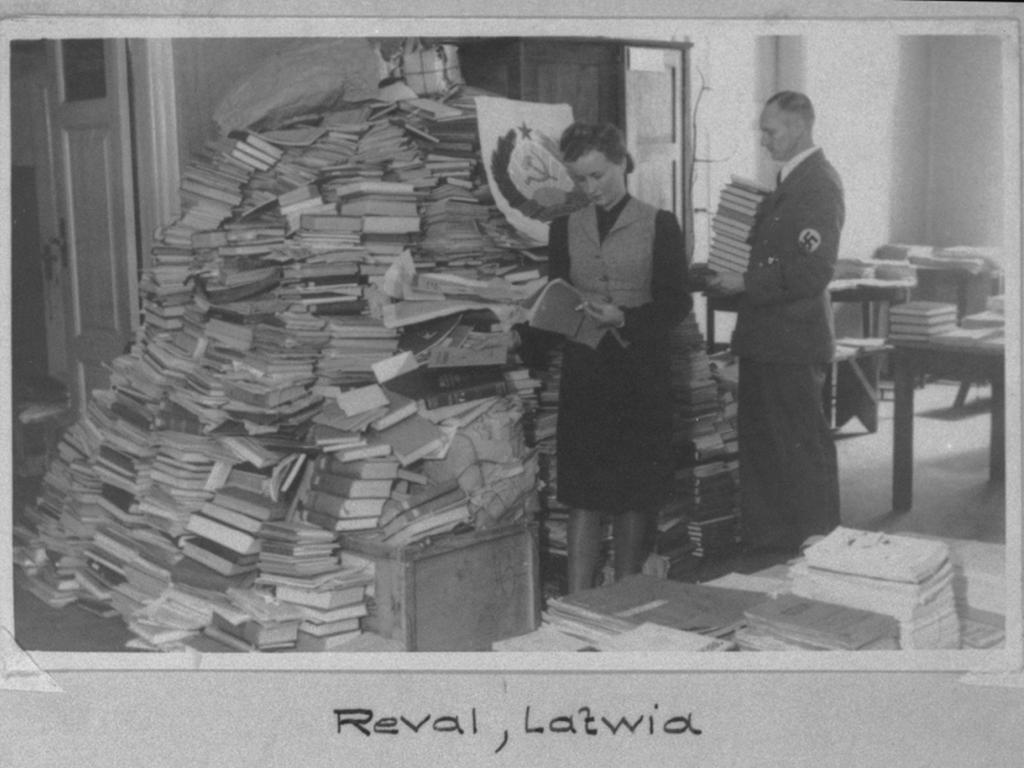 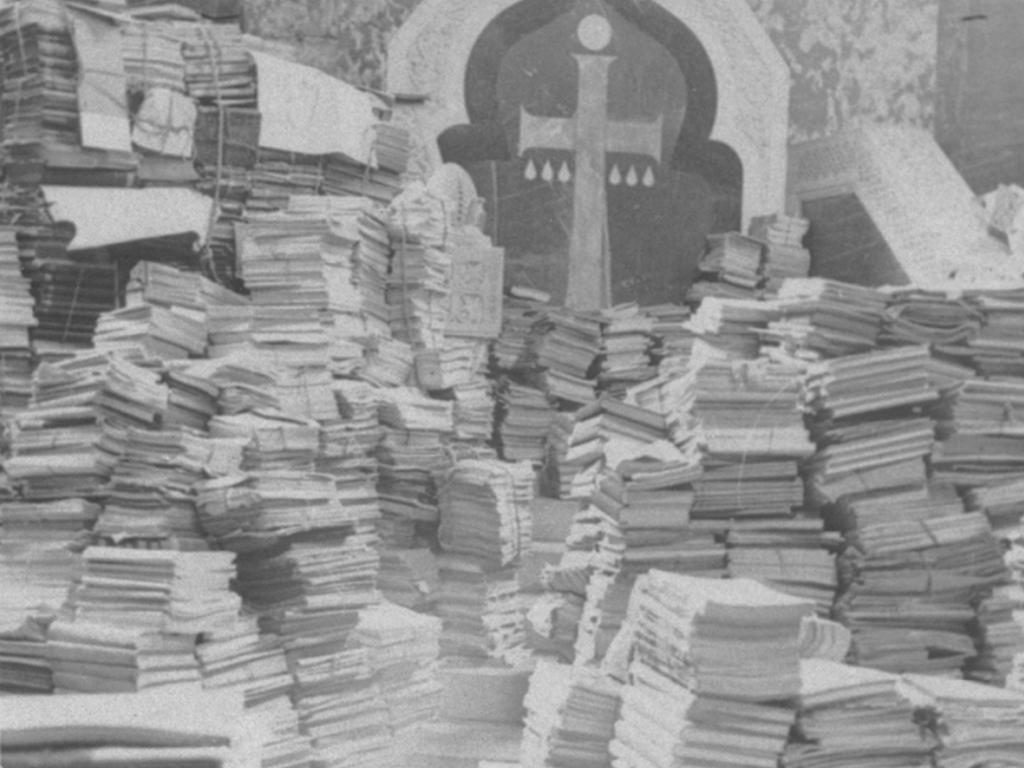 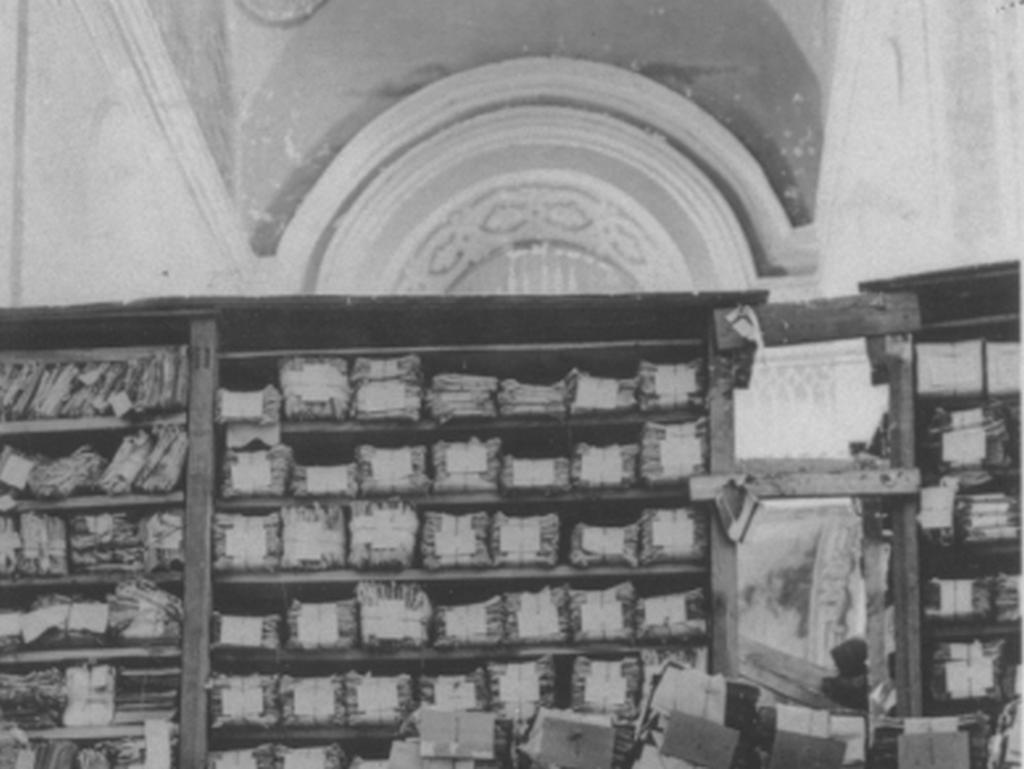 Bundles of papers stored in a church in Kiev. —US Holocaust Memorial Museum, courtesy of Yad Vashem Photo Archives 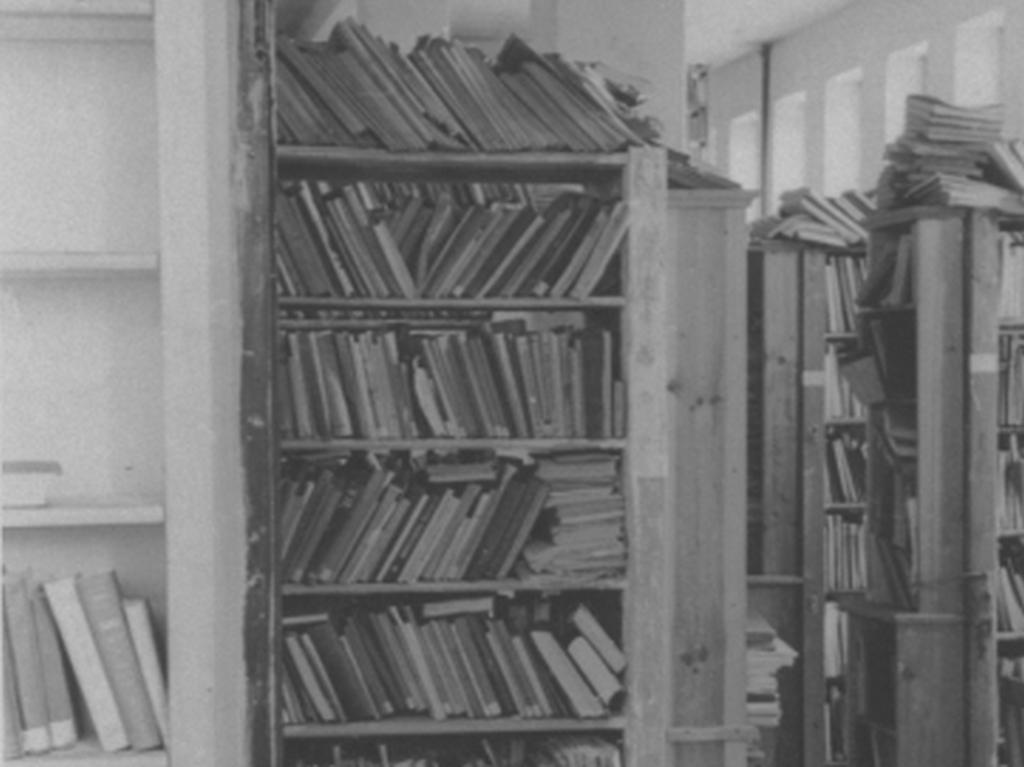 The Lenin Library in Minsk, May 1943. —US Holocaust Memorial Museum, courtesy of Yad Vashem Photo Archives 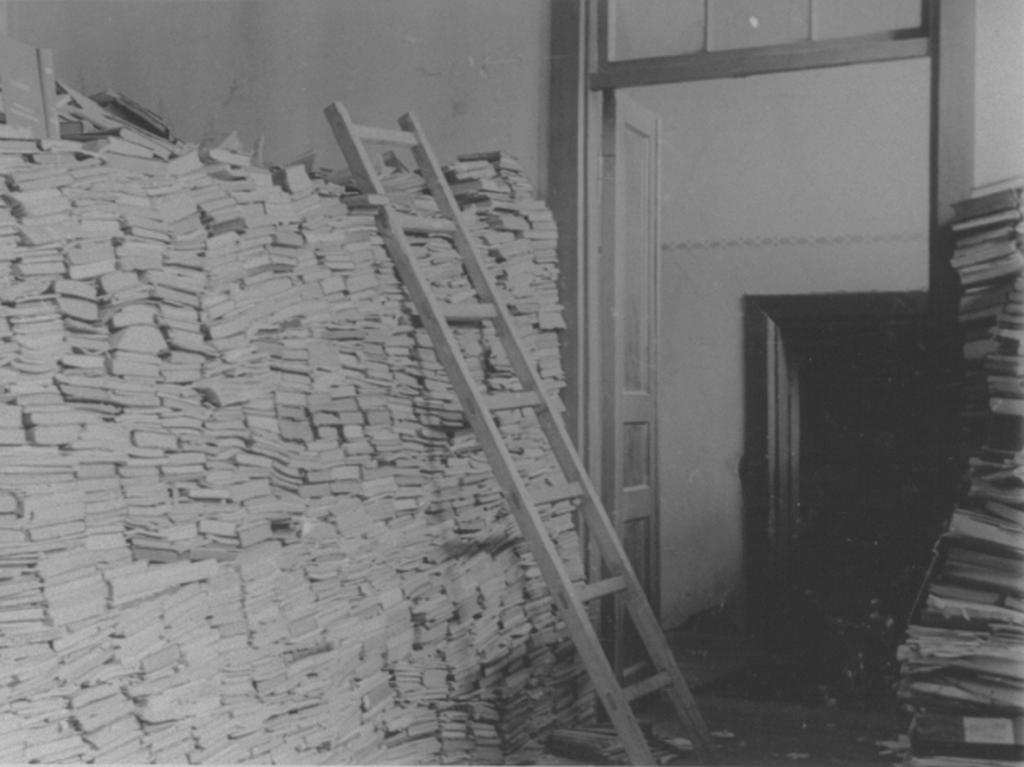 A collection of books in the synagogue, Minsk, in May 1943. —US Holocaust Memorial Museum, courtesy of Yad Vashem Photo Archives 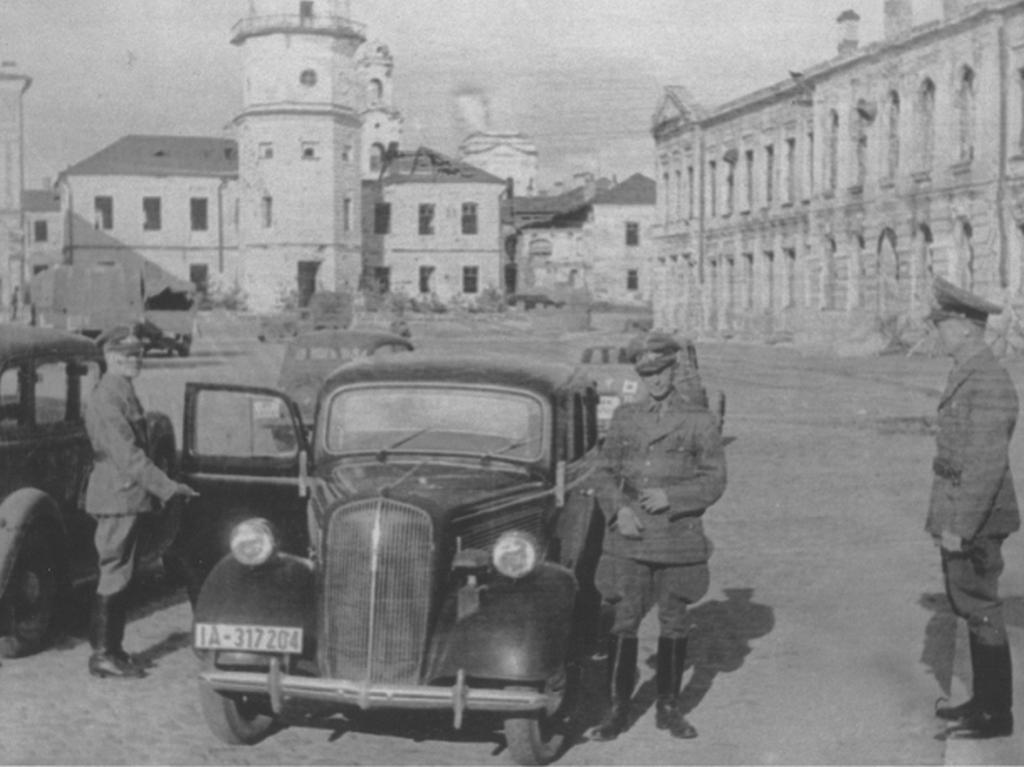 The ERR arrives in Mogilev and gets to work, July 30, 1943. —US Holocaust Memorial Museum, courtesy of Yad Vashem Photo Archives 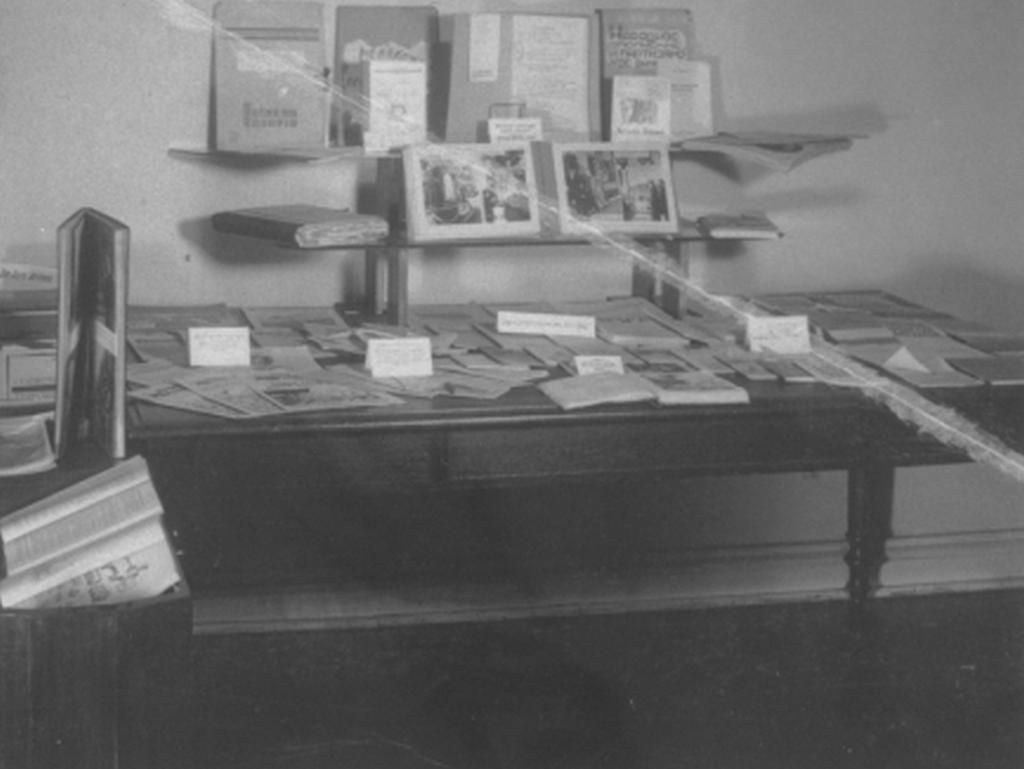 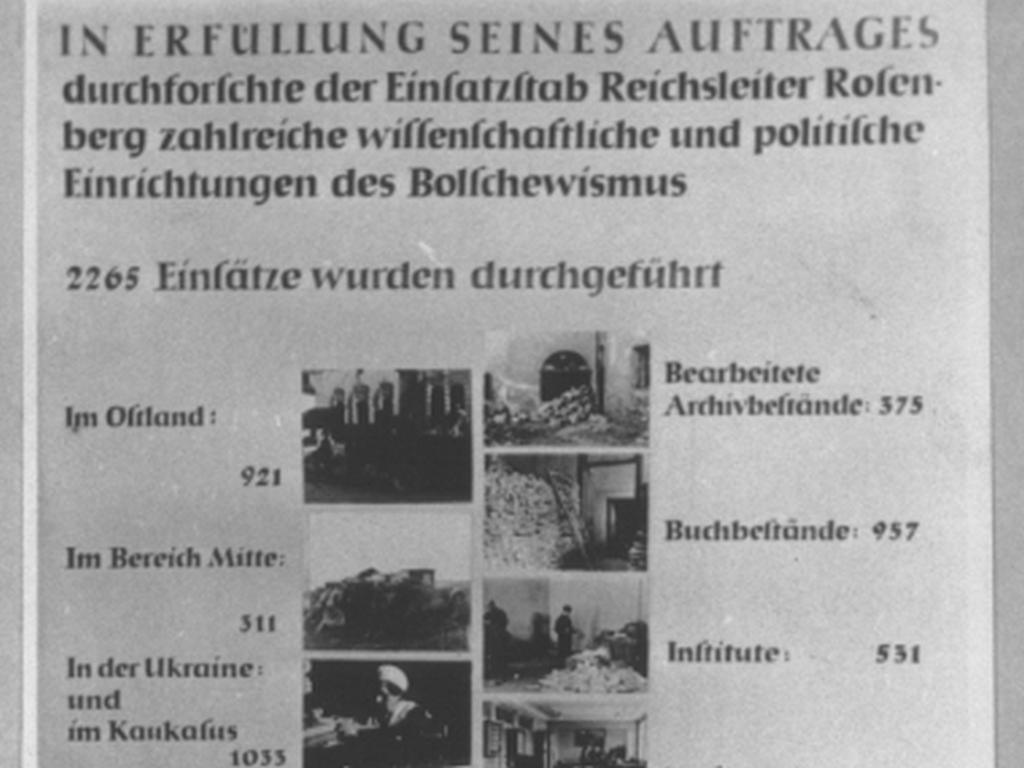 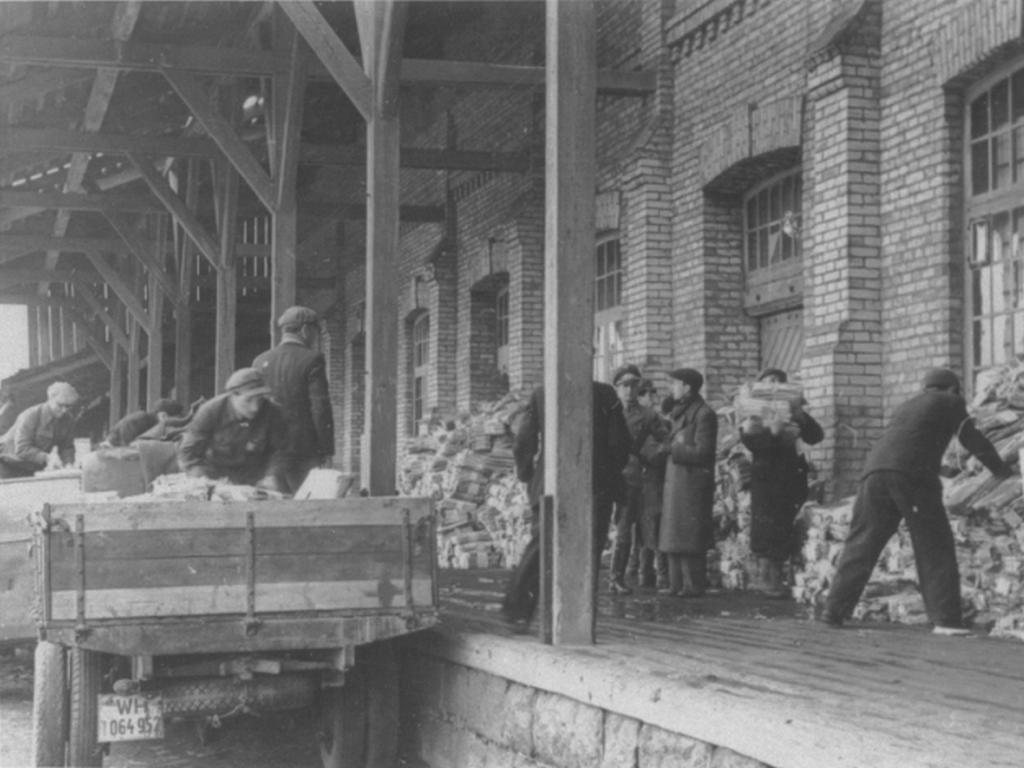 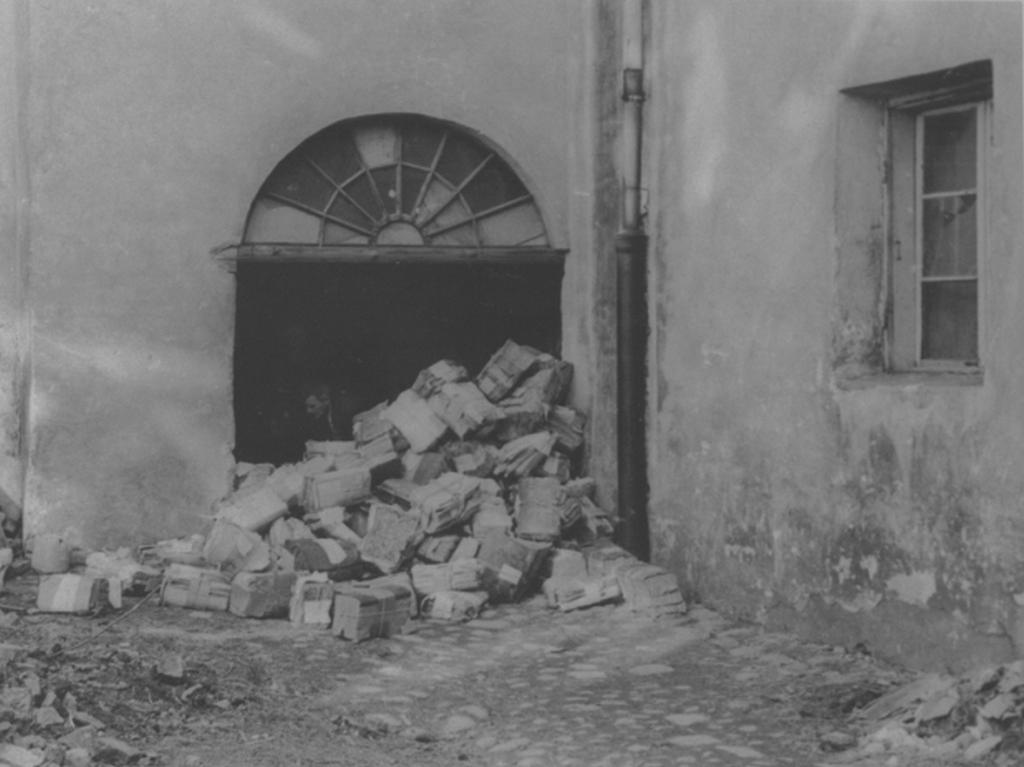 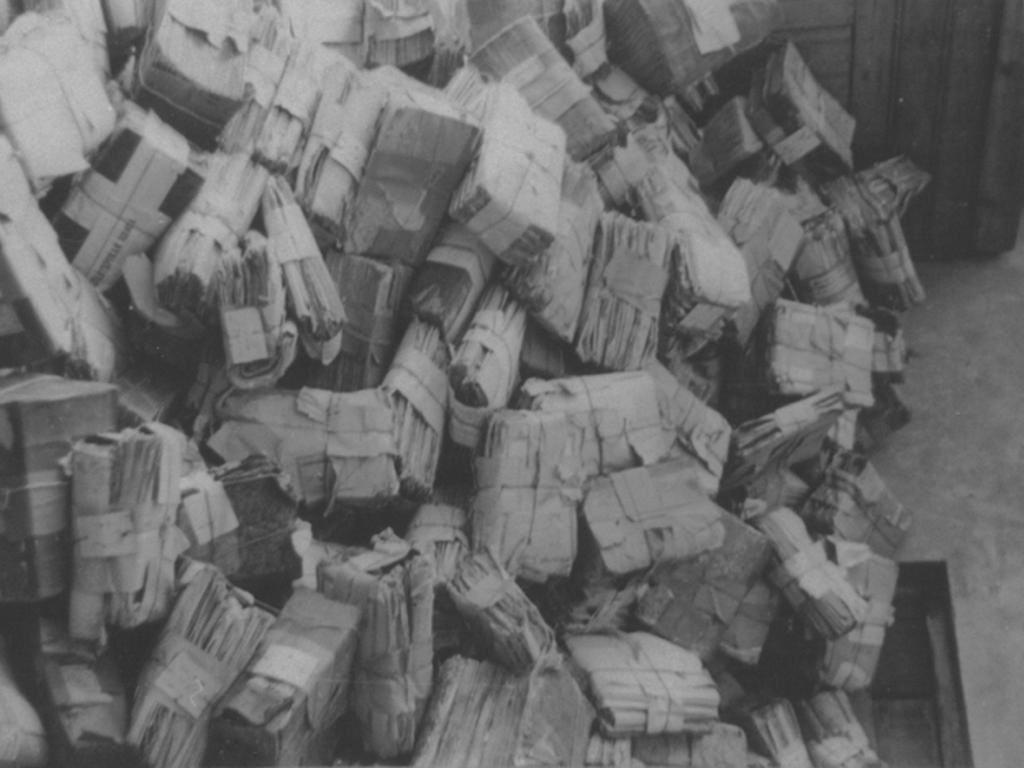 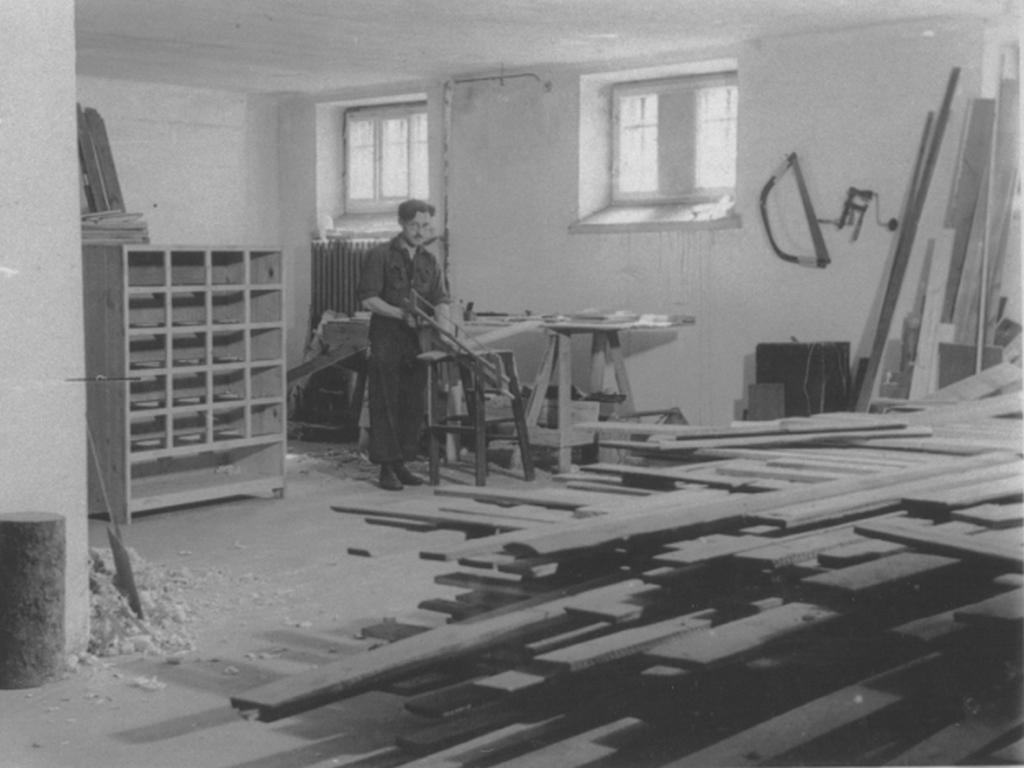 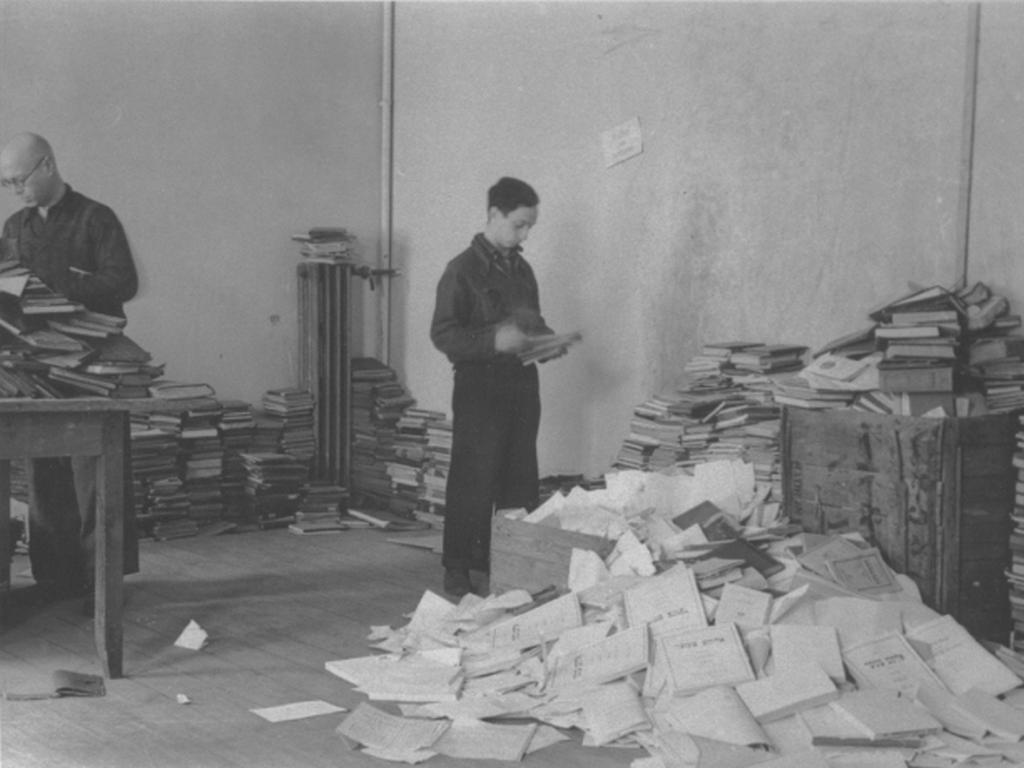 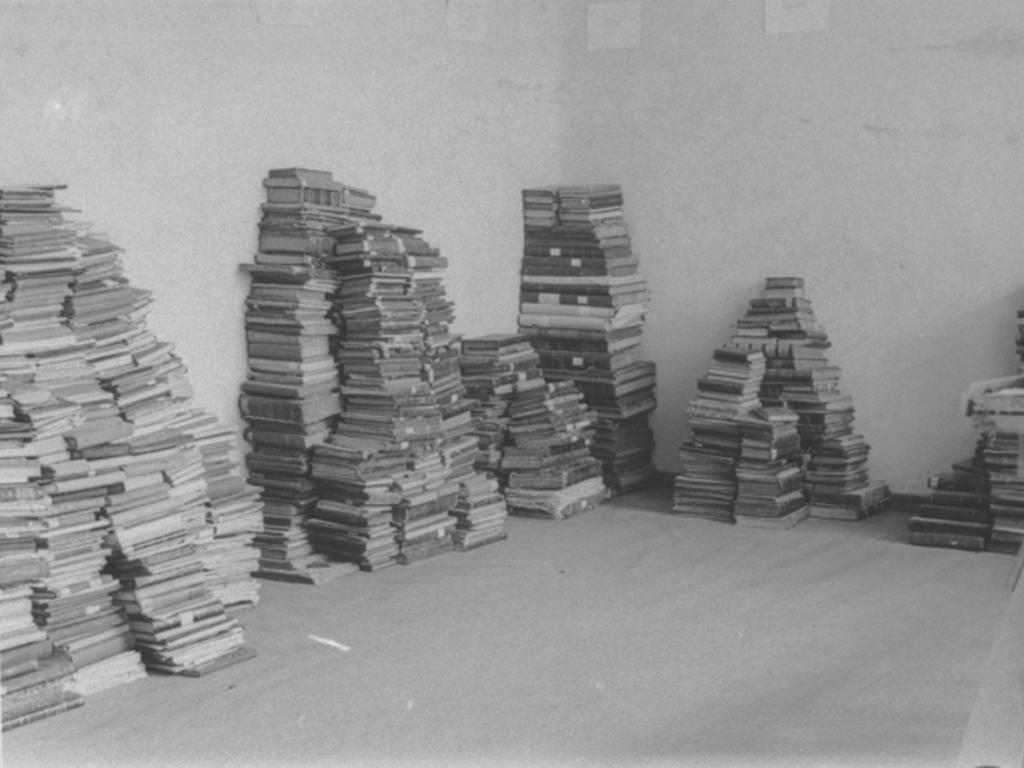 Cultural Looting: the seizure of archives and libraries by Einsatzstab Reichsleiter Rosenberg, 1940–1945

The seizure of Jewish religious artefacts and books began in Germany in the late 1930s. During the war the Nazis extended such looting to the occupied territories, as the cultural counterpart of the physical destruction of the Jewish people. The greater part of the Jews' cultural heritage was also destroyed: religious objects were melted down and Jewish books were burned or sent for pulp. The Nazis decided, however, to preserve a sample of Jewish culture for 'scientific' purposes, as part of a larger program of 'enemy research'.

A multitude of German agencies and individuals participated in the looting of cultural objects throughout Europe. Amongst the most active participants were the men of Himmler's Security Police, the Wehrmacht and Göring's Office of the Four Year Plan, sometimes acting in direct competition with each other. For this reason a number of 'authorisations' were issued from Berlin, to assist in co-ordinating activities and to establish a pecking order amongst the agencies involved.

In January 1940 Hitler informed all offices of the Party and State that Alfred Rosenberg, the Party's ideologue, should be assisted in assembling a library for the planned new educational and research institute of the Party, the Hohe Schule, to be located at the Chiemsee in Bavaria. The library would contain 500,000 volumes and there would be a multi-purpose auditorium accommodating an audience of 3,000 people. Preparations for the Hohe Schule also included other branches within the Reich, such as a 'Centre for Research on the Jewish Question' in Frankfurt.

Looting in the West

In the summer of 1940 Rosenberg received information about the availability of several libraries and archives of Masonic lodges in Paris. He wrote to Hitler on 1 July requesting that this material of great historical and political value be transported to Germany and put at the disposal of the Hohe Schule. Accordingly on 5 July 1940 General Keitel informed the commanders in the western occupied areas that the Führer had determined that the Geheime Staatspolizei - assisted by the archivists of Rosenberg - would search libraries, archives and Masonic lodges for such enemy materials in order to confiscate them.

The Einsatzstab Reichsleiter Rosenberg (ERR) was formed on 17 July 1940 as a special unit of his own Foreign Political Office. It operated in close co-operation with the Wehrmacht and Security Police in the occupied territories. The officers of the ERR assumed the authority to appropriate all writings by and on the Freemasons and Jews. They were to be used for the continuation of the war by other means at the ideological level.

Amongst the materials seized in Paris by the ERR were books from the Alliance Israélite Universelle, the Ecole Rabbinique, the Bibliotheca Polska and also the Rothschild libraries. In some places, such as Amsterdam, valuable Jewish items were uncovered despite careful efforts to conceal them from the Nazis. In Brussels during the summer of 1941 members of the ERR even seized books from the former homes of Jews. The aims of such seizures were partly to deny public access to 'enemy' materials, as well as the preservation of items of value for Nazi propaganda and research purposes. Only a few copies of specific books were intended to be kept for research.

Following the invasion of the Soviet Union similar archival commandos were sent in by Rosenberg in his capacity as newly appointed Minister for the occupied eastern territories. For instance, an operational unit of the ERR started work in Minsk on 18 November 1941. With a staff of some 15 Germans and up to 30 local workers its main task was the evaluation of captured cultural objects, although it also had some active 'cultural tasks' in the occupied territories.

A renewed authorisation for ERR operations was issued by Hitler on 1 March 1942. It granted to the ERR the right to confiscate material thought to be useful for the ideological tasks of the Nazi Party and the future scientific research of the Hohe Schule. Shortly afterwards, on 28 March 1942, the Hohe Schule branch in Frankfurt issued a circular to the offices of the ERR in Ukraine requesting all relevant materials relating to the Jewish question. The ERR in Kiev reported in June the discovery of some 90,000 volumes of Jewish and Hebrew books, many in Yiddish, which would be of interest to the Hohe Schule. A large consignment of Jewish books was therefore sent directly from Kiev to Frankfurt at the end of September 1942.

In Minsk the ERR Work-Group collected hundreds of thousands of books in various depots and spent much time attempting to catalogue these collections. Some 118 Belorussian institutions, mostly libraries, were examined. Forty-five were locations in Minsk, the remainder scattered throughout Belorussia, in the various regional centres, such as Mogilev. According to ERR reports, problems were encountered with local staff selling off library books at street markets in order to supplement their meagre income.

In Vilnius all important Jewish book colections were concentrated in the building of the Jewish Scientific Institute (YIVO). Books from at least 300 synagogues and various private collections were involved. The leading anti-Semitic scholar, Dr. J. Pohl, of the Frankfurt Intitute for Research on the Jewish Question selected one fifth of the books for shipping and ordered the rest to be sold for pulp to a paper mill for 19 Reichsmark per ton of paper. After the war remnants of the collection were transferred to YIVO's new base in New York.

Initially the plan was to keep most of the seized literature in the occupied territories, with only items of special importance to be shipped to Germany. As the tide of war turned against the Germans in 1943, however, increasingly desperate efforts were made to evacuate materials to prevent them falling back into enemy hands. One example of this process of evacuation is the odyssey of part of the Communist Party archives from Smolensk, which to this day still resides close to the U.S. Capital in Washington DC.

Documentary evidence unearthed recently by Patricia Grimsted confirms that CP archival materials from Smolensk were evacuated in early 1943 to Vilnius, where they were housed in a Bendictine convent. By the end of 1944 most of the collection had made its way to Pless castle, near Ratibor in Silesia, which was the archival collection centre of the ERR for materials relating to the Labour Movement (including Socialism and Communism).

About one million books from the Soviet territories had been piled up near Ratibor by 1944, although many books and papers suffered damage due to the haphazard means of evacuation. (For a statistical analysis of its operations in the East prepared by the ERR, see IIIP14.) Included in materials seized in the Soviet Union were Soviet propaganda pamphlets and old books from the Tsarist period.

Within Germany many seized collections were moved to depots in the countryside, due to the dangers in the cities from Allied bombing. At the end of the war hundreds of thousands of books from all over Europe were found by the Allies in these ERR depots.

The photographs in Album III, prepared by the ERR, record the seizure, sorting and transport of books, documents and other cultural objects from all over German-occupied Europe. The systematic looting of cultural objects was parallel to the treatment of Jews and other groups determined as being hostile to the Reich, according to the Nazi's own racial and political ideology.

Nazi attempts to control and collate 'enemy materials' resulted unintentionally in the preservation of at least part of the libraries and archives looted. After the war, U.S. Forces in Germany undertook considerable efforts to return Nazi looted items where possible. However, with the aid of new archival materials from the former Soviet Union and other countries, including some captured ERR records, a more detailed picture of Nazi looting and its effects can now be drawn. It is only on the basis of detailed archival research that the fate of many 'lost' items can be clarified and perhaps in some cases that these items can be returned to their rightful owners.