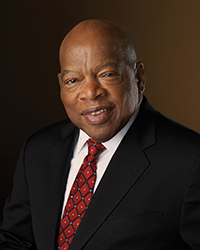 The Museum bestowed the 2016 Elie Wiesel Award on Representative John Lewis (D-GA) in recognition of his extraordinary moral and physical courage and his enduring commitment to promoting the human dignity of all people.

Presenting the award to him on behalf of the Museum at the National Tribute Dinner on May 4, 2016, was Susannah Heschel, the daughter of Rabbi Abraham Joshua Heschel and a member of the Museum's Committee on Ethics, Religion, and the Holocaust, and Evan Jones, a 2001 graduate of the Museum’s Bringing the Lessons Home program.

Prof. Heschel told Representative Lewis, "We present this award to you with gratitude for your courage, your moral leadership, for your work in Congress, for your devotion to the ongoing struggle for justice in this country. You represent one of the central lessons of the Museum: never to forget, never to be indifferent to other people’s suffering."

Often called “one of the most courageous persons the Civil Rights Movement ever produced,” John Lewis has dedicated his life to protecting human rights, securing civil liberties, and building what he calls “the Beloved Community” in America.

The son of sharecroppers, Lewis grew up on his family’s farm and attended segregated public schools in Pike County, Alabama. As a university student, he organized sit-ins at lunch counters and participated in Freedom Rides. At the age of 23, he was an architect of and a keynote speaker at the historic March on Washington in August 1963. Two years later, on “Bloody Sunday,” he helped spearhead the march across the Edmund Pettus Bridge in Selma.

When you see something that is not right, not fair, not just, you have a moral obligation to speak up, to speak out, and find a way to get in the way.
—US Representative John Lewis

Despite more than 40 arrests, physical attacks, and serious injuries, Lewis remained a devoted advocate of the philosophy of nonviolence. After serving on the Atlanta City Council in the 1980s, he was elected to Congress in 1986 and has represented Georgia’s Fifth Congressional District ever since. He is widely respected on both sides of the aisle for his integrity and moral courage.